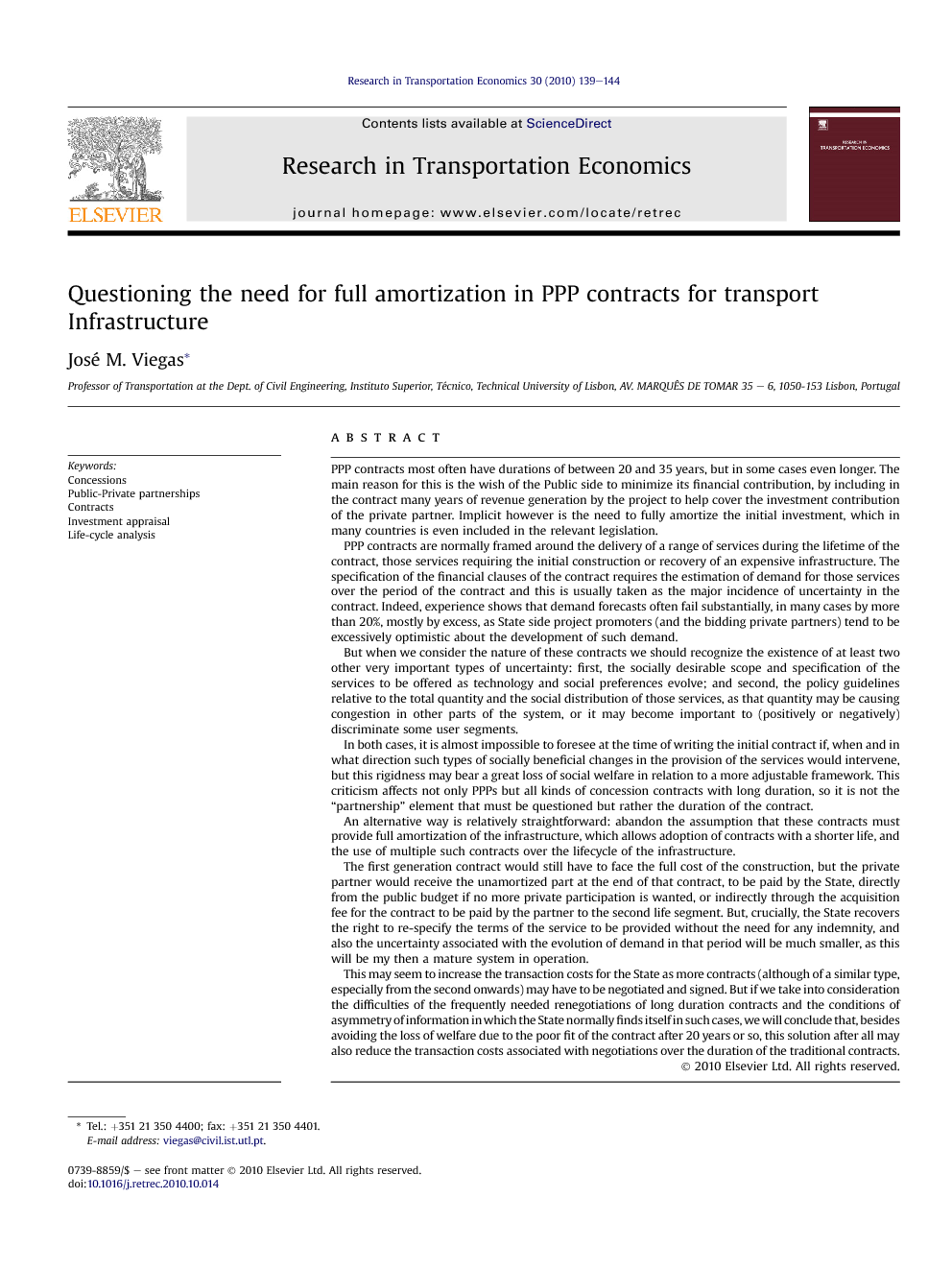 PPP contracts most often have durations of between 20 and 35 years, but in some cases even longer. The main reason for this is the wish of the Public side to minimize its financial contribution, by including in the contract many years of revenue generation by the project to help cover the investment contribution of the private partner. Implicit however is the need to fully amortize the initial investment, which in many countries is even included in the relevant legislation. PPP contracts are normally framed around the delivery of a range of services during the lifetime of the contract, those services requiring the initial construction or recovery of an expensive infrastructure. The specification of the financial clauses of the contract requires the estimation of demand for those services over the period of the contract and this is usually taken as the major incidence of uncertainty in the contract. Indeed, experience shows that demand forecasts often fail substantially, in many cases by more than 20%, mostly by excess, as State side project promoters (and the bidding private partners) tend to be excessively optimistic about the development of such demand. But when we consider the nature of these contracts we should recognize the existence of at least two other very important types of uncertainty: first, the socially desirable scope and specification of the services to be offered as technology and social preferences evolve; and second, the policy guidelines relative to the total quantity and the social distribution of those services, as that quantity may be causing congestion in other parts of the system, or it may become important to (positively or negatively) discriminate some user segments. In both cases, it is almost impossible to foresee at the time of writing the initial contract if, when and in what direction such types of socially beneficial changes in the provision of the services would intervene, but this rigidness may bear a great loss of social welfare in relation to a more adjustable framework. This criticism affects not only PPPs but all kinds of concession contracts with long duration, so it is not the “partnership” element that must be questioned but rather the duration of the contract. An alternative way is relatively straightforward: abandon the assumption that these contracts must provide full amortization of the infrastructure, which allows adoption of contracts with a shorter life, and the use of multiple such contracts over the lifecycle of the infrastructure. The first generation contract would still have to face the full cost of the construction, but the private partner would receive the unamortized part at the end of that contract, to be paid by the State, directly from the public budget if no more private participation is wanted, or indirectly through the acquisition fee for the contract to be paid by the partner to the second life segment. But, crucially, the State recovers the right to re-specify the terms of the service to be provided without the need for any indemnity, and also the uncertainty associated with the evolution of demand in that period will be much smaller, as this will be my then a mature system in operation. This may seem to increase the transaction costs for the State as more contracts (although of a similar type, especially from the second onwards) may have to be negotiated and signed. But if we take into consideration the difficulties of the frequently needed renegotiations of long duration contracts and the conditions of asymmetry of information in which the State normally finds itself in such cases, we will conclude that, besides avoiding the loss of welfare due to the poor fit of the contract after 20 years or so, this solution after all may also reduce the transaction costs associated with negotiations over the duration of the traditional contracts.

There is no commonly agreed definition for a Public–Private Partnerships (PPP), different declinations being adopted in different countries according to their earlier practices in the split of responsibilities between the State and private companies regarding provision of services of public interest. For the sake of this chapter we adopt the broad definition proposed in (Saussier, Staropoli, & Yvrande-Billon, 2009) “It is an agreement between a public authority (whether at the State or local level) and a private or semi-private entity to deliver a public service and in which part of the risks and investments are transferred outside of the public entity’s hands, leading generally to long-term agreements”. In some countries, for instance in Brazil (Law 11079 of 30 December 2004), there is a legal distinction between a PPP and a concession contract, in that the former involves a financial contribution from the State to the concessionaire – with or without revenues collected from the users – whereas in the latter the only source of revenue for the concessionaire are those revenues from the users. In many cases, there is really no distinction and the term concession is used whenever there is a long-term transfer of responsibility over an infrastructure and associated services from the State to a private company which must bear a significant investment, independently of how the remuneration of that company is split between users and taxpayers. All our discussion is equally applicable in both cases, as the main focus in this chapter is precisely on the long duration of these contracts, its causes and consequences, and possible ways to solve at least some of the negative consequences. The long duration of PPP contracts or more generally of any concession contracts for transport infrastructure – typically around 30 years – has long been a matter for concern, not only because of the very high difficulty of estimating demand over this horizon, but also in relation to the very likely emergence over that period of some unpredicted (possibly unpredictable) event that significantly changes the conditions of provision of the service that is the object of the contract, or the preferences of the State regarding those conditions. The uncertainty of demand of transport services and the impossibility to control it by either the owner or the concessionaire has long been recognized and posed serious problems in many contracts, being one of the major causes for renegotiations. This problem has been elegantly and effectively answered by the Present Value Revenue scheme first proposed in (Engel, Fischer, & Galetovic, 1997), with which the duration of the concession is allowed to vary, upwards or downwards from the initial estimate, until the accumulated discounted value of the actual revenues collected by the concessionaire reaches the threshold declared in the contract. Still, even for a contract with flexible duration, it is very useful to have good demand forecasts as they are essential to establish a reasonably consensual and stable time frame within which that duration could float. In (Trujillo, Quinet, & Estache, 2002) an analysis is done of the main reasons for frequent lapses in this respect, the strategic behavior of agents (on both sides) and lack of good data being two of the most frequent. In the traditional PPP contracts, several things are implicitly assumed to remain stable over the life of the contract: ● the nature and specifications of the services provided, which in turn are based on an assumption of stability of consumers’ preferences, and another on the technological basis of those and associated services; ● the government policy in relation to those services, namely in relation to prices, equity issues, access rules, etc. While these assumption may have been valid in the motorway concessions launched in Western Europe in the 1970’s and 1980’s it seems clear that at least some of them would be easily subject to doubt in the present, in those countries as elsewhere, over periods of around 30 years. The main reason for this long duration in these contracts is the assumption – often built into the national laws governing these contracts – that the concession must allow full amortization of the infrastructure being built or upgraded so that the services to the public can be delivered. This is meant so that the State (represented by a public agency which is the owner of the infrastructure) receives it from the concessionaire in good condition and free of charge at the end of the contract. In this paper we challenge the assumption of full amortization. With the release of the full amortization principle, and the consequently possible shorter duration of contracts, the real purpose is to obtain release from a policy and technology lock-in through the concession contract. The objective is to present the concept and to analyze the pros and cons of allowing shorter contracts that are not associated with full amortization of the infrastructure, while assuming that said infrastructure still has a significant useful life at the end of that (first) concession contract. The key idea is simple: instead of one very long PPP contract for some 30 years, there will be two (or more) concession contracts, the first implying construction and maintenance of the infrastructure and the subsequent one(s) implying its continued maintenance and possible upgrade/refurbishment with new technologies. In all these contracts, a well specified service must be delivered to its clients. The main difference to the traditional scheme is that at the beginning of each new (shorter) cycle in the process, the owner has the right to specify the services to be delivered, the conditions of that delivery, as well as the physical and functional attributes of the infrastructure, i.e. to redefine the object of the concession. In each cycle, the concessionaire must bear an initial investment, which in the first turn will be dominated by the construction cost, whereas in the subsequent one(s) it will be dominated by the rent that must be paid to the owner. And it is the rent of the second cycle that will – fully or almost – allow the owner to pay the concessionaire of the first cycle on its termination.

In this chapter we have seen that the adoption of PPP/concession contracts implying a full amortization of the infrastructure investment, and the corresponding durations around 30 years, may generate high costs for society, since the owner will specify objectives, policies and technological standards that may be very correct at the time of launch but clearly be sub-optimal some 15 or 20 years later, still with a significant number of years of the concession to go. Correction of the corresponding clauses in the contract is possible in most countries, but rather expensive, as the economic equilibrium of the contract must be preserved against what was agreed at the outset. The once major problem of uncertainty of demand can now be well addressed with variable term contracts, based on the Present Value of Revenues concept. This should be complemented with a new feature allowing the concessionaire to exercise a put option on the remaining (unamortized part) of the contract if the accumulated demand is excessively in delay with respect to what had been agreed in the base case. Such a situation is not expected to occur unless as a consequence of a major economic shock, in relation to which the concessionaire has had no role in the generation or capacity to mitigate. He should thus not have to bear disproportionate consequences from it. So, if the concession system is designed for successive cycles, each with a revision of the objectives, policies, technological standards and demand forecasts, the main advantages of the PPP/concession system are retained, while avoiding its major drawback, namely the policy and technology lock-ins that the duration of the traditional contracts brought along.