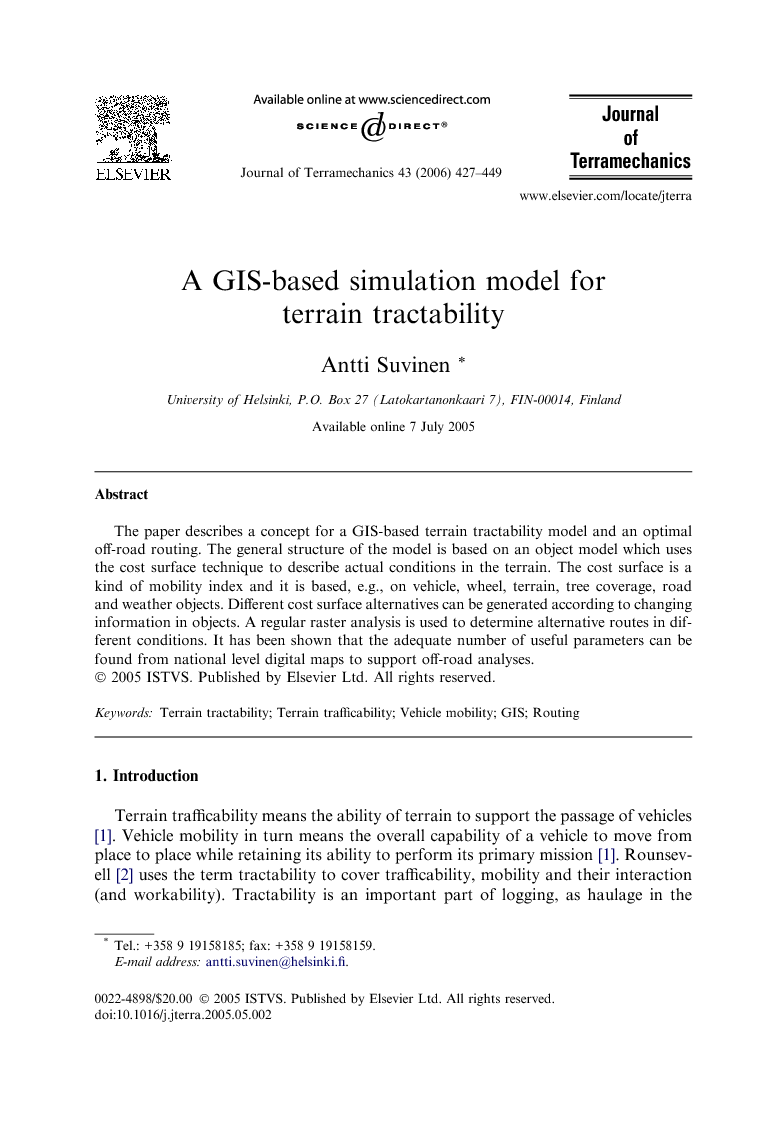 The paper describes a concept for a GIS-based terrain tractability model and an optimal off-road routing. The general structure of the model is based on an object model which uses the cost surface technique to describe actual conditions in the terrain. The cost surface is a kind of mobility index and it is based, e.g., on vehicle, wheel, terrain, tree coverage, road and weather objects. Different cost surface alternatives can be generated according to changing information in objects. A regular raster analysis is used to determine alternative routes in different conditions. It has been shown that the adequate number of useful parameters can be found from national level digital maps to support off-road analyses.

Terrain trafficability means the ability of terrain to support the passage of vehicles [1]. Vehicle mobility in turn means the overall capability of a vehicle to move from place to place while retaining its ability to perform its primary mission [1]. Rounsevell [2] uses the term tractability to cover trafficability, mobility and their interaction (and workability). Tractability is an important part of logging, as haulage in the forest is an aggregate form of off-road transportation [3]. Harvesters also operate on the forest floor. There are a lot of studies and articles in existence that deal with components related to tractability, but very few of them handle it as a comprehensive system which can be managed by computer techniques. Also, off-road routing for forestry purposes is in most cases not computerized, although existing digital maps and GPS systems could support such routing methods. Hintze [4] and [5], Rounsevell [2] and Earl [6], for example, have set out to predict soil strength with the aid of climatic data, and Davis and Laut [7], Matthies [8] and Saarilahti [9] have created expert systems to estimate terrain trafficability and soil strength. Birkel [10] also took into account the interaction between the terrain and the vehicle. This interaction is the template of his simulation models for terrain trafficability. GIS techniques have been applied to logging operations in several studies, e.g. [11], [12], [13] and [14], while Davis et al. [15] and Cuddy et al. [16] used them together with expert systems to predict environmental damage during army training exercises. Orava [17] used raster analysis to determine terrain trafficability as needed for planning military activities, but his application included only terrain parameters and did not contained the attributes of the vehicle, and therefore it could not be used to solve routing problems. Rummukainen and Ala-Ilomäki [18] presented a theoretical structure for an object-oriented GIS system for modelling terrain tractability conditions and routing problems in logging operations, but has not applied this technology in practice.

It has been shown that useful parameters for supporting off-road analyses of the routing of logging vehicles to forest stands can be obtained from national-level digital maps. This method can also be used, of course, to route other off-road vehicles, e.g., military vehicles. Timber purchase organizations could also use this application to find the best logging order for forest stands that it is handling, for example, or to determine the optimum terrain trafficability characteristics for forest stands or the types of stands that it needs more of in order to meet its purchase goals. This terrain tractability model based on object-oriented programming enables effective sensitivity analyses to be carried out. As the load, wheels and engine are independent objects, it is easy to study how the situation changes if the load size differs or a lower tyre pressure is used, etc. It also makes it easier to enter ready-made objects (e.g., most common tyre types) via the system’s user interface. Most earlier expert systems defining terrain trafficability, e.g. [7], [8] and [9] have not aimed to predict the above trafficability conditions, although Hintze [5], Rounsevell [2] and Earl [6] have developed computational models to predict soil strength based on climatic data, as in this paper. Not all the above systems are GIS-based, however, so that they cannot take their source data on the terrain directly from GIS databases nor can they necessarily employ all the available techniques of GIS analysis. Earlier GIS applications, e.g. [11], [12], [13], [15], [16] and [17], are not aimed at routing off-road vehicles, but merely at attempting to find out the terrain trafficability conditions in a certain area. Also, these applications concentrate on terrain trafficability, which is only an attribute of the terrain, whereas the focus in this paper is on terrain tractability, which depends on the interaction between the terrain and vehicle that takes place through the contact surface of the wheel. Most of these applications, e.g. [12] and [13], also need field measurements, in contrast to the present system. Navigation and routing of forest tractors has been done previously with GPS, e.g. [79], [80] and [14], but not on the basis of terrain tractability.