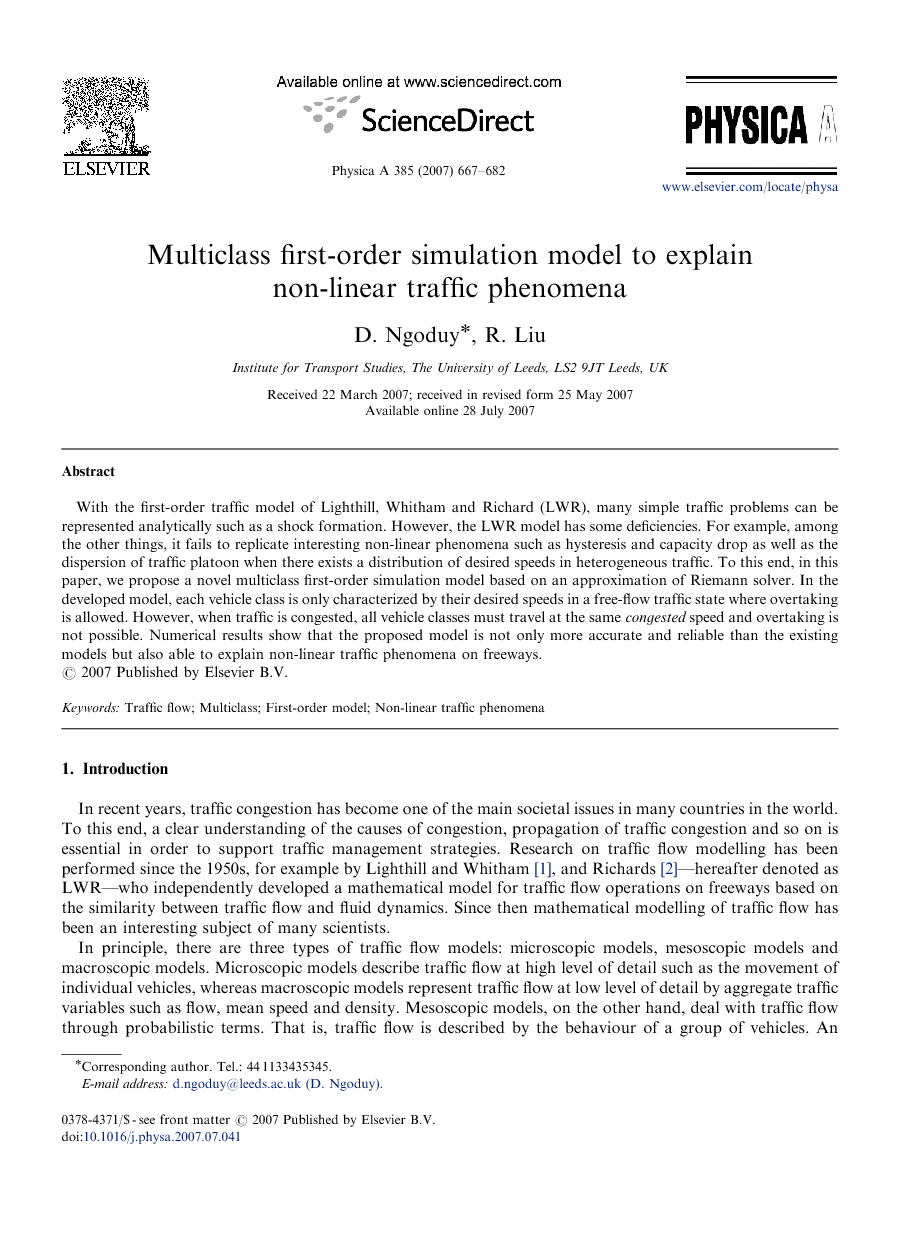 With the first-order traffic model of Lighthill, Whitham and Richard (LWR), many simple traffic problems can be represented analytically such as a shock formation. However, the LWR model has some deficiencies. For example, among the other things, it fails to replicate interesting non-linear phenomena such as hysteresis and capacity drop as well as the dispersion of traffic platoon when there exists a distribution of desired speeds in heterogeneous traffic. To this end, in this paper, we propose a novel multiclass first-order simulation model based on an approximation of Riemann solver. In the developed model, each vehicle class is only characterized by their desired speeds in a free-flow traffic state where overtaking is allowed. However, when traffic is congested, all vehicle classes must travel at the same congested speed and overtaking is not possible. Numerical results show that the proposed model is not only more accurate and reliable than the existing models but also able to explain non-linear traffic phenomena on freeways.

In recent years, traffic congestion has become one of the main societal issues in many countries in the world. To this end, a clear understanding of the causes of congestion, propagation of traffic congestion and so on is essential in order to support traffic management strategies. Research on traffic flow modelling has been performed since the 1950s, for example by Lighthill and Whitham [1], and Richards [2]—hereafter denoted as LWR—who independently developed a mathematical model for traffic flow operations on freeways based on the similarity between traffic flow and fluid dynamics. Since then mathematical modelling of traffic flow has been an interesting subject of many scientists. In principle, there are three types of traffic flow models: microscopic models, mesoscopic models and macroscopic models. Microscopic models describe traffic flow at high level of detail such as the movement of individual vehicles, whereas macroscopic models represent traffic flow at low level of detail by aggregate traffic variables such as flow, mean speed and density. Mesoscopic models, on the other hand, deal with traffic flow through probabilistic terms. That is, traffic flow is described by the behaviour of a group of vehicles. An example of mesoscopic models is the gas-kinetic model which is used to derive the macroscopic models based on the method of moments [3] and [4]. In this paper, we mainly focus on the macroscopic modelling approach. The first-order macroscopic LWR-type models are simple and allow one to represent a formation of shock wave, but its assumption of a steady-state speed density relationship does not allow fluctuations around the so-called equilibrium fundamental diagram. Furthermore, some non-linear traffic phenomena such as hysteresis and capacity drop are not represented by the LWR-type models. In real traffic, these phenomena have been observed, e.g. Ref. [5], which indicate that the flow downstream of a jam is smaller than that upstream of the jam. To remedy such deficiencies of the LWR-type models, a lot of research has been devoted to develop higher order (macroscopic) models which can describe the non-linear instabilities of traffic flow. Examples of higher order macroscopic models can be found in Refs. [4], [6], [7], [8], [9], [10], [11], [12], [13] and [14]. Although the higher order models have been able to show some significant improvements over the first-order models in replicating the transitions between traffic congested states and non-linear phenomena such as platoon dispersion, hysteresis and capacity drop (see Refs. [11], [15], [16] and [17]), their higher number of parameters have limited their real-life applications.

The paper has dealt with presenting the concepts and mathematical properties of a multiclass first-order traffic flow model. The model has been shown to remedy some disadvantages of the original first-order models and is able to explain some non-linear traffic phenomena that the original first-order models fail to do. For example, we have shown numerical results of the new model in representing the dispersion of traffic platoon along a homogeneous freeway. We have discussed the relatively small smoothing effect of the proposed model. We found that the proposed model converges faster and is thus more efficient in terms of computation than the existing model of Ref. [22]. This paper is itself not complete without case studies of real-life applications. To this end, the model parameters were calibrated using dedicated optimization techniques and real data collected in freeway M25 in England. Simulation results have shown that the model fit well with the observation. More specifically, the proposed model is able to replicate traffic hysteresis and capacity drop phenomena that have been observed in this freeway.