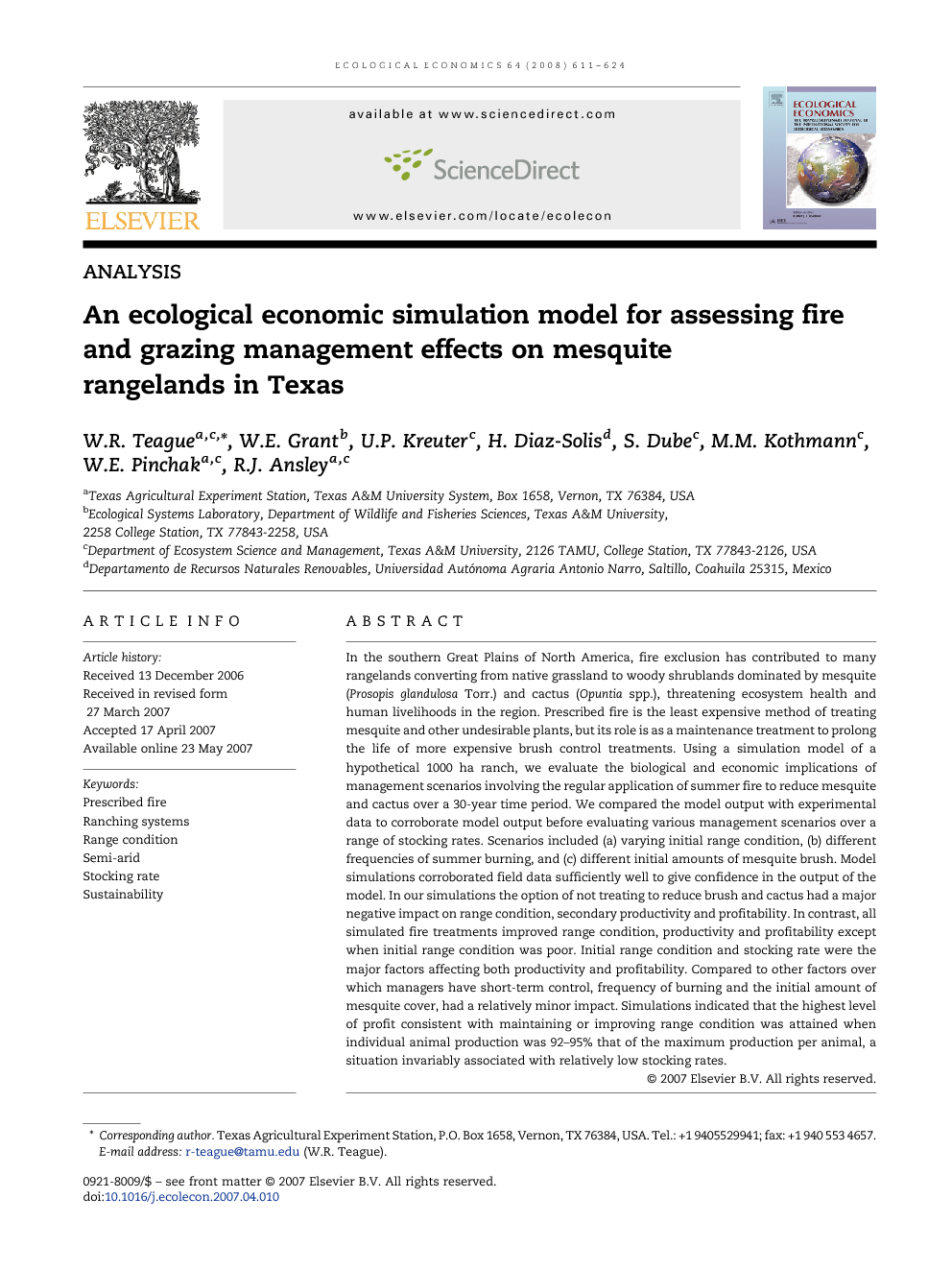 In the southern Great Plains of North America, fire exclusion has contributed to many rangelands converting from native grassland to woody shrublands dominated by mesquite (Prosopis glandulosa Torr.) and cactus (Opuntia spp.), threatening ecosystem health and human livelihoods in the region. Prescribed fire is the least expensive method of treating mesquite and other undesirable plants, but its role is as a maintenance treatment to prolong the life of more expensive brush control treatments. Using a simulation model of a hypothetical 1000 ha ranch, we evaluate the biological and economic implications of management scenarios involving the regular application of summer fire to reduce mesquite and cactus over a 30-year time period. We compared the model output with experimental data to corroborate model output before evaluating various management scenarios over a range of stocking rates. Scenarios included (a) varying initial range condition, (b) different frequencies of summer burning, and (c) different initial amounts of mesquite brush. Model simulations corroborated field data sufficiently well to give confidence in the output of the model. In our simulations the option of not treating to reduce brush and cactus had a major negative impact on range condition, secondary productivity and profitability. In contrast, all simulated fire treatments improved range condition, productivity and profitability except when initial range condition was poor. Initial range condition and stocking rate were the major factors affecting both productivity and profitability. Compared to other factors over which managers have short-term control, frequency of burning and the initial amount of mesquite cover, had a relatively minor impact. Simulations indicated that the highest level of profit consistent with maintaining or improving range condition was attained when individual animal production was 92–95% that of the maximum production per animal, a situation invariably associated with relatively low stocking rates.

North American prairies evolved under episodic grazing and widespread warm season wildfires that historically limited woody plants. However, the growth of forage-based livestock production and the threat of fire damage to buildings and structures in rural areas led to suppression of wildfires. Together with reduced grass competition from heavy livestock grazing, enhanced distribution by livestock, increased global CO2 and removal of prairie dogs (Cynomys ludovicianus), fire reduction has contributed to many southern rangelands converting from native grasslands to woody shrublands ( Schlesinger et al., 1990, Archer, 1994, Archer, 1995, Archer and Smeins, 1991, Collins et al., 1998, Polley et al., 1994, Kramp et al., 1998 and Weltzin et al., 1998). This epidemic invasion of woody and succulent species has resulted in a decline in biodiversity ( West, 1993 and Knopf, 1994), a reduction in ecosystem resilience (Peterson et al., 1998), and a greater likelihood of irreversible changes in plant species composition (Westoby et al., 1989). Maintaining or restoring rangeland ecosystem health and resilience is a critical social imperative to ensure the future supply of the ecosystem services they supply, which are critical for the future well-being of human societies in the region. Such services include provision of stable soils, reliable and clean supplies of water, and the natural occurrence of plants, animals and other organisms to meet the aesthetic and cultural values and livelihoods of people living in rangelands (Grice and Hodgkinson, 2002). Honey mesquite (Prosopis glandulosa Torr.) dominates many rangelands in the southern Great Plains of North America, reducing forage production and interfering with livestock foraging and management (Scifres, 1980). If left unchecked, mesquite encroachment progresses within grassland ecosystems until a closed canopy woodland thicket occurs (Ansley et al., 2004), which threatens the sustainability of livestock ranching as well as wildlife habitat (Rollins and Cearley, 2004) and grassland birds (Knopf, 1994). Increase in mesquite cover can significantly reduce grass productivity but it generally affects watersheds less than other woody species (Carlson et al., 1991). Cacti (Opuntia spp.) become increasingly abundant as range condition declines thereby reducing forage production and hampering livestock management (Hamilton and Ueckert, 2004).

Most conservation oriented ranchers attempt to maximize profitability while maintaining or improving the health of the ecosystems that provide the resources necessary for their operations. Ensuring the future supply of ecosystem services by maintaining or restoring ecosystem health and resilience is critical for the future well-being of human societies in the region. The relentless invasion of woody plants, such as mesquite, and succulent plants, such as cacti, compromises ecosystem health and can result in changes in plant species composition that require expensive remediation interventions to restore ecosystem function, biodiversity and productivity. Historically, summer fires have been a major driver of open grassland and savanna ecosystems across the globe. Furthermore, there are both ecological and economic advantages to using fire to reduce invasive plants, such as mesquite brush and cacti, but the implementation of prescribed fire requires making some critical management decisions. Our model simulations illuminated the interactions and relative importance of the most important management decisions necessary for using summer fire to reduce such invasive plants. The use of results of a ranch-size field experiment to parameterize and corroborate our model and the close correspondence between the model output and experimental results provided a high level of confidence in the veracity of the simulation results and their relevance for ranch scale rangeland management decisions.