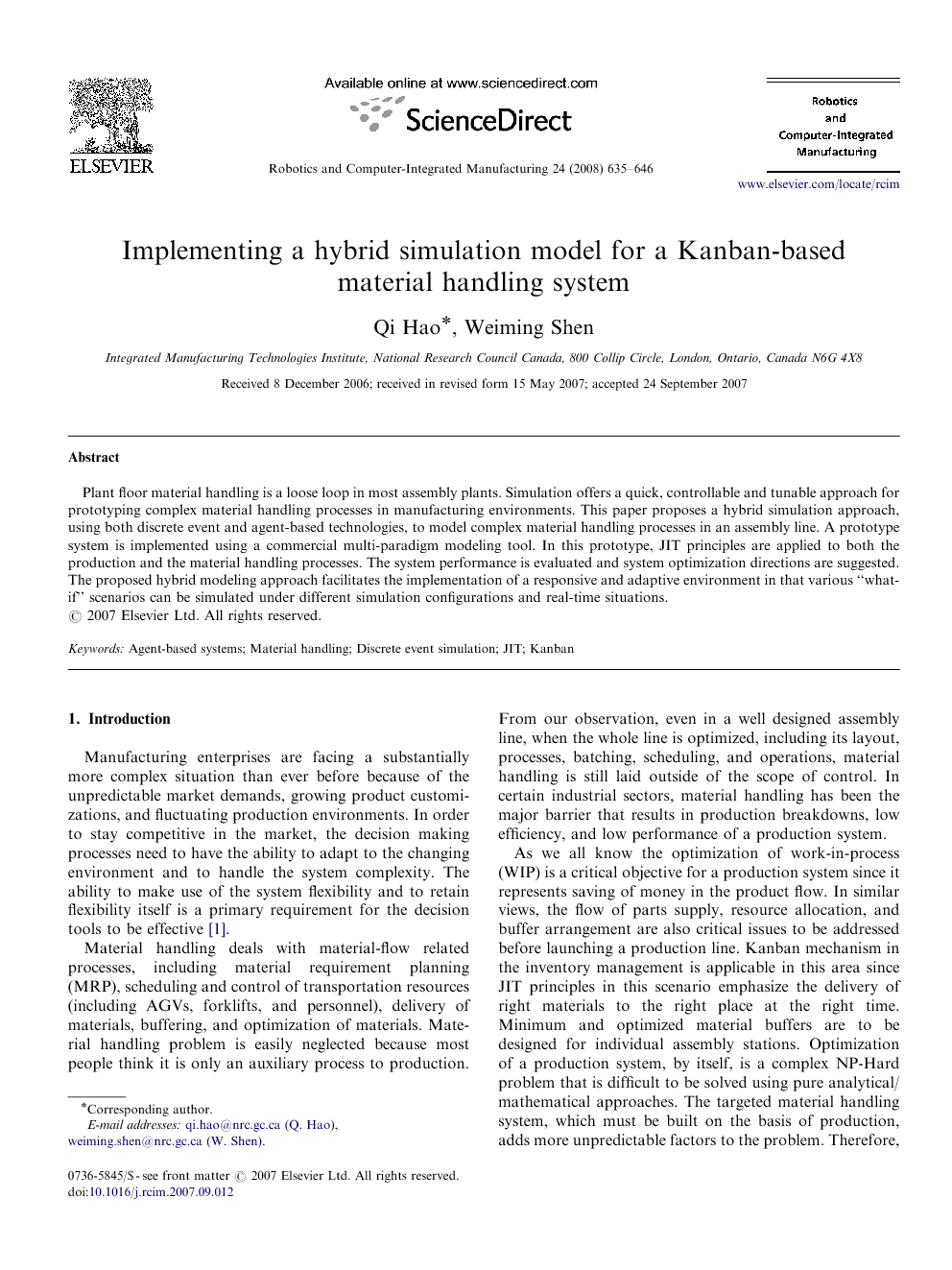 Plant floor material handling is a loose loop in most assembly plants. Simulation offers a quick, controllable and tunable approach for prototyping complex material handling processes in manufacturing environments. This paper proposes a hybrid simulation approach, using both discrete event and agent-based technologies, to model complex material handling processes in an assembly line. A prototype system is implemented using a commercial multi-paradigm modeling tool. In this prototype, JIT principles are applied to both the production and the material handling processes. The system performance is evaluated and system optimization directions are suggested. The proposed hybrid modeling approach facilitates the implementation of a responsive and adaptive environment in that various “what-if” scenarios can be simulated under different simulation configurations and real-time situations.

Manufacturing enterprises are facing a substantially more complex situation than ever before because of the unpredictable market demands, growing product customizations, and fluctuating production environments. In order to stay competitive in the market, the decision making processes need to have the ability to adapt to the changing environment and to handle the system complexity. The ability to make use of the system flexibility and to retain flexibility itself is a primary requirement for the decision tools to be effective [1]. Material handling deals with material-flow related processes, including material requirement planning (MRP), scheduling and control of transportation resources (including AGVs, forklifts, and personnel), delivery of materials, buffering, and optimization of materials. Material handling problem is easily neglected because most people think it is only an auxiliary process to production. From our observation, even in a well designed assembly line, when the whole line is optimized, including its layout, processes, batching, scheduling, and operations, material handling is still laid outside of the scope of control. In certain industrial sectors, material handling has been the major barrier that results in production breakdowns, low efficiency, and low performance of a production system. As we all know the optimization of work-in-process (WIP) is a critical objective for a production system since it represents saving of money in the product flow. In similar views, the flow of parts supply, resource allocation, and buffer arrangement are also critical issues to be addressed before launching a production line. Kanban mechanism in the inventory management is applicable in this area since JIT principles in this scenario emphasize the delivery of right materials to the right place at the right time. Minimum and optimized material buffers are to be designed for individual assembly stations. Optimization of a production system, by itself, is a complex NP-Hard problem that is difficult to be solved using pure analytical/mathematical approaches. The targeted material handling system, which must be built on the basis of production, adds more unpredictable factors to the problem. Therefore, simulation has been by far the methodologies of choice in the majority of studies reported in the literature under the material handling topic [2].

A simulation model is a dynamic or an operating model of a system or problem entity that mimics the operating behavior of the system or problem entity. For fast construction of complex manufacturing systems, we need to find an effective simulation tool to perform important decision variations before launching a production line or re-engineering an operating line. This paper proposed a hybrid simulation modeling approach which combines the discrete event modeling and agent-based modeling technologies. A discrete event model of the Kanban-based material handling prototype is built based on a simplified assembly line using a multi-paradigm modeling tool called AnyLogic™. In this simulation, an agent is binding with an Entity Message (vehicle message) every time when the simulator generates an Entity Message instance. As proved by the developed prototype, the intelligence, controllability, and adaptiveness of the whole material handling system are greatly improved through agent-based technologies. The developed material handling simulation is smart in terms of: (1) using a bidding protocol between the Kanban scheduling agent and vehicle agents for its Kanban scheduling process; and (2) individual control of individual transportation vehicles in certain behaviors, such as routing, breakdown, and repair activities. With such capacities, the system is able to simulate various dynamic situations and get more accurate information of transportation resources in general. From a comprehensive literature review on topics of Kanban systems and simulations, hybrid simulation technologies, and agent-based material handling systems, this research is the first attempt to combine agent-based modeling and discrete event modeling in a simulation environment.