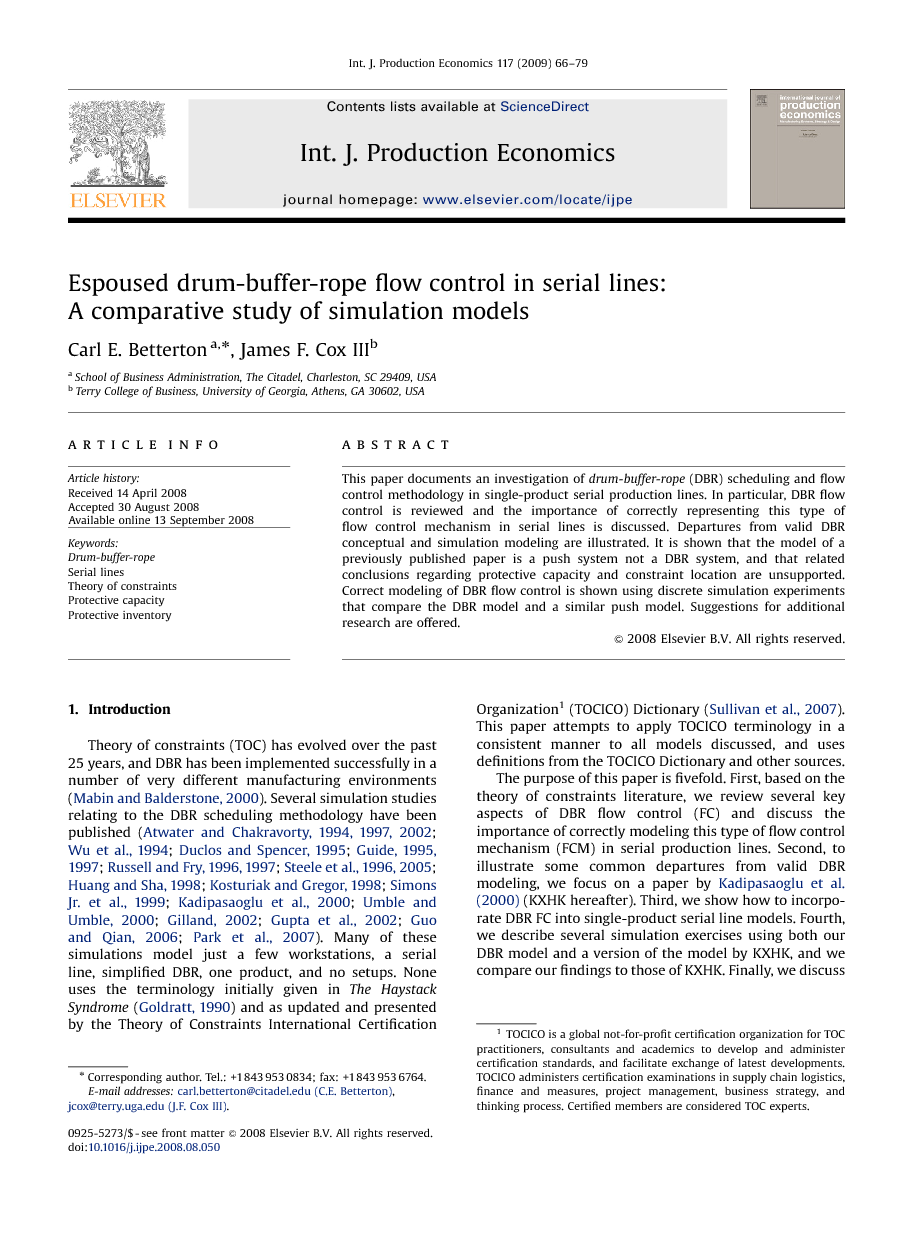 This paper documents an investigation of drum-buffer-rope (DBR) scheduling and flow control methodology in single-product serial production lines. In particular, DBR flow control is reviewed and the importance of correctly representing this type of flow control mechanism in serial lines is discussed. Departures from valid DBR conceptual and simulation modeling are illustrated. It is shown that the model of a previously published paper is a push system not a DBR system, and that related conclusions regarding protective capacity and constraint location are unsupported. Correct modeling of DBR flow control is shown using discrete simulation experiments that compare the DBR model and a similar push model. Suggestions for additional research are offered.

Theory of constraints (TOC) has evolved over the past 25 years, and DBR has been implemented successfully in a number of very different manufacturing environments (Mabin and Balderstone, 2000). Several simulation studies relating to the DBR scheduling methodology have been published (Atwater and Chakravorty, 1994, Atwater and Chakravorty, 1997 and Atwater and Chakravorty, 2002; Wu et al., 1994; Duclos and Spencer, 1995; Guide, 1995 and Guide, 1997; Russell and Fry, 1996 and Russell and Fry, 1997; Steele et al., 1996 and Steele et al., 2005; Huang and Sha, 1998; Kosturiak and Gregor, 1998; Simons Jr. et al., 1999; Kadipasaoglu et al., 2000; Umble and Umble, 2000; Gilland, 2002; Gupta et al., 2002; Guo and Qian, 2006; Park et al., 2007). Many of these simulations model just a few workstations, a serial line, simplified DBR, one product, and no setups. None uses the terminology initially given in The Haystack Syndrome (Goldratt, 1990) and as updated and presented by the Theory of Constraints International Certification Organization1 (TOCICO) Dictionary (Sullivan et al., 2007). This paper attempts to apply TOCICO terminology in a consistent manner to all models discussed, and uses definitions from the TOCICO Dictionary and other sources. The purpose of this paper is fivefold. First, based on the theory of constraints literature, we review several key aspects of DBR flow control (FC) and discuss the importance of correctly modeling this type of flow control mechanism (FCM) in serial production lines. Second, to illustrate some common departures from valid DBR modeling, we focus on a paper by Kadipasaoglu et al. (2000) (KXHK hereafter). Third, we show how to incorporate DBR FC into single-product serial line models. Fourth, we describe several simulation exercises using both our DBR model and a version of the model by KXHK, and we compare our findings to those of KXHK. Finally, we discuss the results of our DBR model simulations, provide a summary of our findings, and suggest additional research.

In this study we have focused on five specific objectives. First, based on the theory of constraints literature, we reviewed several key aspects of DBR FC and discussed the importance of correct conceptual and simulation models for this type of FCM in serial production lines. Second, to illustrate some common departures from valid DBR modeling, we reviewed the KXHK paper (Kadipasaoglu et al., 2000) pointing out major flaws in their conceptual modeling, which translated to their simulation results. Third, we demonstrated how to correctly incorporate DBR FC into single-product, asynchronous serial line simulation models having unconstrained buffer space. Fourth, we described several simulation exercises using both our DBR model and a version of the model by KXHK, and we compared our findings to those of KXHK. Finally, we discussed the results of our DBR model simulations, provided a summary of our findings, and posed an ambitious research agenda based on our work and review of the literature. This study is significant because it refutes published results that have stood unchallenged for a number of years. It is also important in that we described a correct (albeit, relatively simple) conceptual DBR model based on the TOC methodology, we translated that concept into a discrete-event simulation model, and in the process of doing so we obtained and reported what we consider some interesting findings that cry out for additional research. We demonstrate both the potential and the danger in modeling, showing that a model—no matter how sophisticated—that violates fundamental principles of the system being modeled, produces invalid results. This study serves as an important reminder to students, researchers, and practitioners that before building a simulation model one must first develop a sufficiently correct conceptual model of the system in question. Finally, a crucial implication of this study and our suggested research agenda, is that much more research is needed in TOC and specifically regarding DBR production systems. We hope this work will serve as a clarion call to the research community and allied professional organizations to support such research and advance the field.