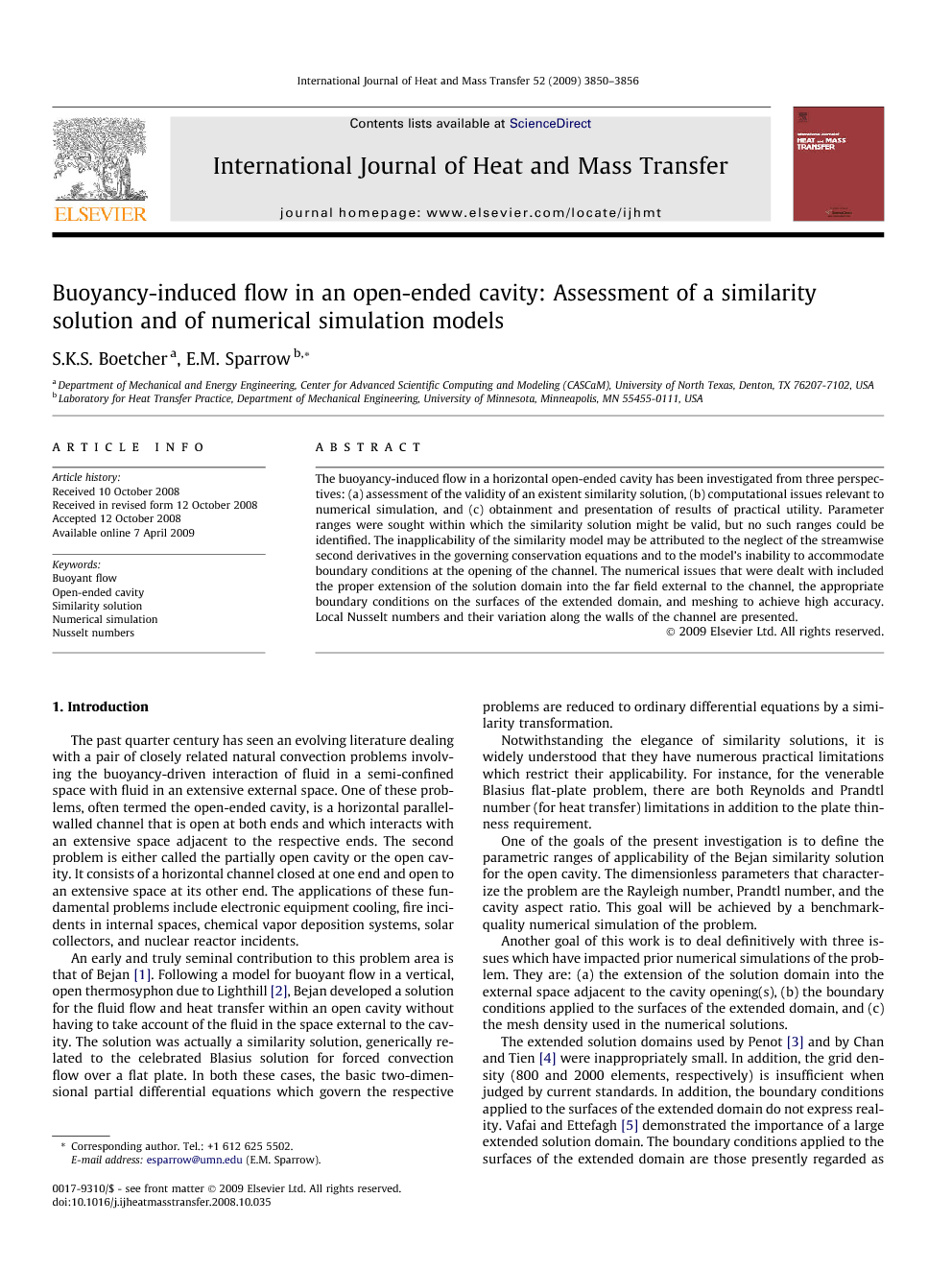 The buoyancy-induced flow in a horizontal open-ended cavity has been investigated from three perspectives: (a) assessment of the validity of an existent similarity solution, (b) computational issues relevant to numerical simulation, and (c) obtainment and presentation of results of practical utility. Parameter ranges were sought within which the similarity solution might be valid, but no such ranges could be identified. The inapplicability of the similarity model may be attributed to the neglect of the streamwise second derivatives in the governing conservation equations and to the model’s inability to accommodate boundary conditions at the opening of the channel. The numerical issues that were dealt with included the proper extension of the solution domain into the far field external to the channel, the appropriate boundary conditions on the surfaces of the extended domain, and meshing to achieve high accuracy. Local Nusselt numbers and their variation along the walls of the channel are presented.

The past quarter century has seen an evolving literature dealing with a pair of closely related natural convection problems involving the buoyancy-driven interaction of fluid in a semi-confined space with fluid in an extensive external space. One of these problems, often termed the open-ended cavity, is a horizontal parallel-walled channel that is open at both ends and which interacts with an extensive space adjacent to the respective ends. The second problem is either called the partially open cavity or the open cavity. It consists of a horizontal channel closed at one end and open to an extensive space at its other end. The applications of these fundamental problems include electronic equipment cooling, fire incidents in internal spaces, chemical vapor deposition systems, solar collectors, and nuclear reactor incidents. An early and truly seminal contribution to this problem area is that of Bejan [1]. Following a model for buoyant flow in a vertical, open thermosyphon due to Lighthill [2], Bejan developed a solution for the fluid flow and heat transfer within an open cavity without having to take account of the fluid in the space external to the cavity. The solution was actually a similarity solution, generically related to the celebrated Blasius solution for forced convection flow over a flat plate. In both these cases, the basic two-dimensional partial differential equations which govern the respective problems are reduced to ordinary differential equations by a similarity transformation. Notwithstanding the elegance of similarity solutions, it is widely understood that they have numerous practical limitations which restrict their applicability. For instance, for the venerable Blasius flat-plate problem, there are both Reynolds and Prandtl number (for heat transfer) limitations in addition to the plate thinness requirement.

The goals of this research are to (a) assess the validity of a similarity-solution model of the problem, (b) deal definitively with critical issues related to the numerical simulation of the problem, and (c) provide results of practical utility. The similarity-solution model is, in effect, a boundary-layer model. As is usual in such models, the streamwise second derivatives are omitted. Of perhaps greater significance is that the boundary conditions at the channel opening have to be left unspecified in the similarity model. As a consequence, the flow within the channel is totally uninformed about any happenings which might occur in the space external to the channel. When this work was undertaken, the initial intent was to determine the ranges of the relevant parameters for which the similarity solutions would be valid. However, as demonstrated in Fig. 2, Fig. 3, Fig. 4, Fig. 5, Fig. 6, Fig. 7, Fig. 8 and Fig. 9, it was not possible, within the ranges examined here, to find any conditions for which the similarity model is valid. In particular, according to the similarity model, the function ϕ′ should be independent of the horizontal coordinate x, which clearly is not supported by the results of Fig. 2, Fig. 3, Fig. 4, Fig. 5, Fig. 6, Fig. 7, Fig. 8 and Fig. 9. The simulation issues of interest are the size of the external solution domain, the use of appropriate boundary conditions on the surfaces of the external solution domain, and the mesh density. All of these issues have been rectified in the present simulation. Numerical results are presented for the local Nusselt number and its variation along the walls of the channel. In general, the highest Nusselt number values occur near the channel opening. The shape of the Nusselt number variation indicates a zone of flow separation near the opening of the channel.