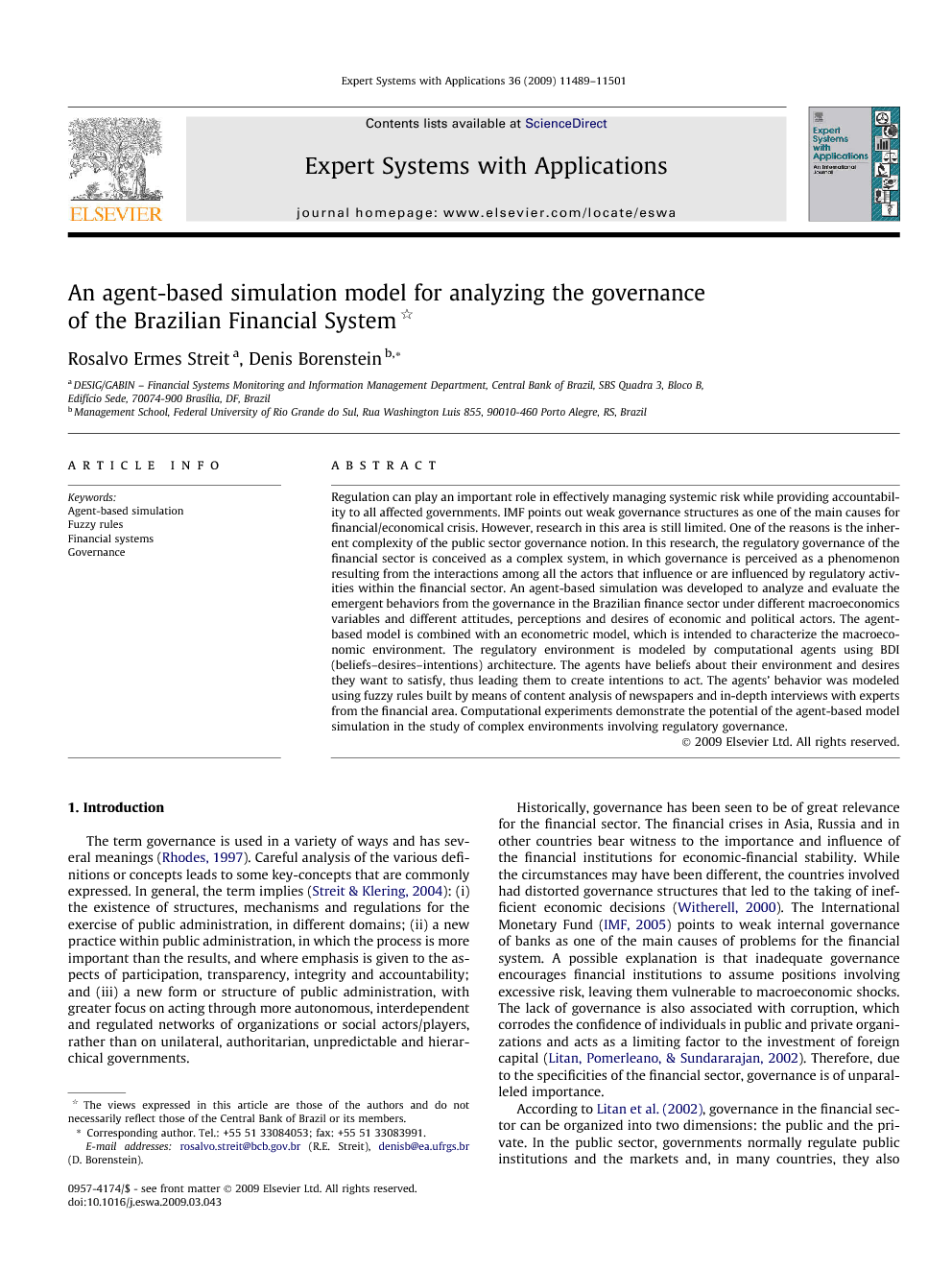 Regulation can play an important role in effectively managing systemic risk while providing accountability to all affected governments. IMF points out weak governance structures as one of the main causes for financial/economical crisis. However, research in this area is still limited. One of the reasons is the inherent complexity of the public sector governance notion. In this research, the regulatory governance of the financial sector is conceived as a complex system, in which governance is perceived as a phenomenon resulting from the interactions among all the actors that influence or are influenced by regulatory activities within the financial sector. An agent-based simulation was developed to analyze and evaluate the emergent behaviors from the governance in the Brazilian finance sector under different macroeconomics variables and different attitudes, perceptions and desires of economic and political actors. The agent-based model is combined with an econometric model, which is intended to characterize the macroeconomic environment. The regulatory environment is modeled by computational agents using BDI (beliefs–desires–intentions) architecture. The agents have beliefs about their environment and desires they want to satisfy, thus leading them to create intentions to act. The agents’ behavior was modeled using fuzzy rules built by means of content analysis of newspapers and in-depth interviews with experts from the financial area. Computational experiments demonstrate the potential of the agent-based model simulation in the study of complex environments involving regulatory governance.

The term governance is used in a variety of ways and has several meanings (Rhodes, 1997). Careful analysis of the various definitions or concepts leads to some key-concepts that are commonly expressed. In general, the term implies (Streit & Klering, 2004): (i) the existence of structures, mechanisms and regulations for the exercise of public administration, in different domains; (ii) a new practice within public administration, in which the process is more important than the results, and where emphasis is given to the aspects of participation, transparency, integrity and accountability; and (iii) a new form or structure of public administration, with greater focus on acting through more autonomous, interdependent and regulated networks of organizations or social actors/players, rather than on unilateral, authoritarian, unpredictable and hierarchical governments. Historically, governance has been seen to be of great relevance for the financial sector. The financial crises in Asia, Russia and in other countries bear witness to the importance and influence of the financial institutions for economic-financial stability. While the circumstances may have been different, the countries involved had distorted governance structures that led to the taking of inefficient economic decisions (Witherell, 2000). The International Monetary Fund (IMF, 2005) points to weak internal governance of banks as one of the main causes of problems for the financial system. A possible explanation is that inadequate governance encourages financial institutions to assume positions involving excessive risk, leaving them vulnerable to macroeconomic shocks. The lack of governance is also associated with corruption, which corrodes the confidence of individuals in public and private organizations and acts as a limiting factor to the investment of foreign capital (Litan, Pomerleano, & Sundararajan, 2002). Therefore, due to the specificities of the financial sector, governance is of unparalleled importance. According to Litan et al. (2002), governance in the financial sector can be organized into two dimensions: the public and the private. In the public sector, governments normally regulate public institutions and the markets and, in many countries, they also directly operate financial institutions. In the private context, governance of the financial sector refers both to the control that the institutions have and exercise over those that take out loans, and the planned practices that ensure the solidity of the institutions themselves. The public and private dimensions of governance in the financial sector are not independent. They are related in a way that is critical for the stability of financial systems. For the purposes of the present study, the regulatory governance of the financial system can be understood as a complex system, in which governance is a phenomenon that results from the various interactions among all the actors that influence or are influenced by regulatory activities within the financial sector. Hence, governance is exerted through the interactions among social and political actors and entities (individuals, organizations and institutions), as suggested in Kooiman’s (2003) framework. The author separates the structural and intentional aspects of the interactions and the relationship between these two levels in order to analyze and interpret governance. Three types of interactions are identified: (i) interference; (ii) reciprocal interactions (reciprocal action and reaction); and (iii) interventions. The interference-type interactions are those that are least organized within society, that is, they are relatively informal. Reciprocal interactions are typically horizontal in nature. In principle, there is no formal authority. The actors seek to achieve collective objectives and participate more or less equally. Lastly, interventions are the most formalized and vertical type of social interaction. They seek to exercise formalized influence, normally by means of legal mechanism, and can be found in all sectors of society, while they are more visible in the public sector.

This paper described the development of an agent-based simulation model, which is used to analyze and evaluate governance of the Brazilian Financial System. Governance is seen as a phenomenon that results from the various interactions among all the actors that influence or are influenced by regulatory activities within the financial sector. The study contributes to the literature as follows: (i) towards the enhancement of the understanding of the meaning of governance; and (ii) the use of artificial intelligence techniques and methods to increasing the effectiveness of governmental actions towards stability in financial systems. An important aspect for the success of the modeling process was the use of fuzzy logic in representing the behavior of the agents within the BDI architecture. As information available for the construction of the model is qualitative in nature, fuzzy logic enabled the representation of the problem in an intuitive way. IF–THEN rules described by means of linguistic variables and terms were employed to describe the vagueness involved in financial decisions. However, as the number of fuzzy rules grows exponentially with the number of fuzzy variables and linguistic terms used in the rules, the fuzzy rules were segmented and structured in a hierarchy. The agent decisions were divided into intermediary decision units in order to achieve the final outcome relative to the agent behavior. However, the segmentation of the input variables into distinct decision units impaired the definitions of the agent models.