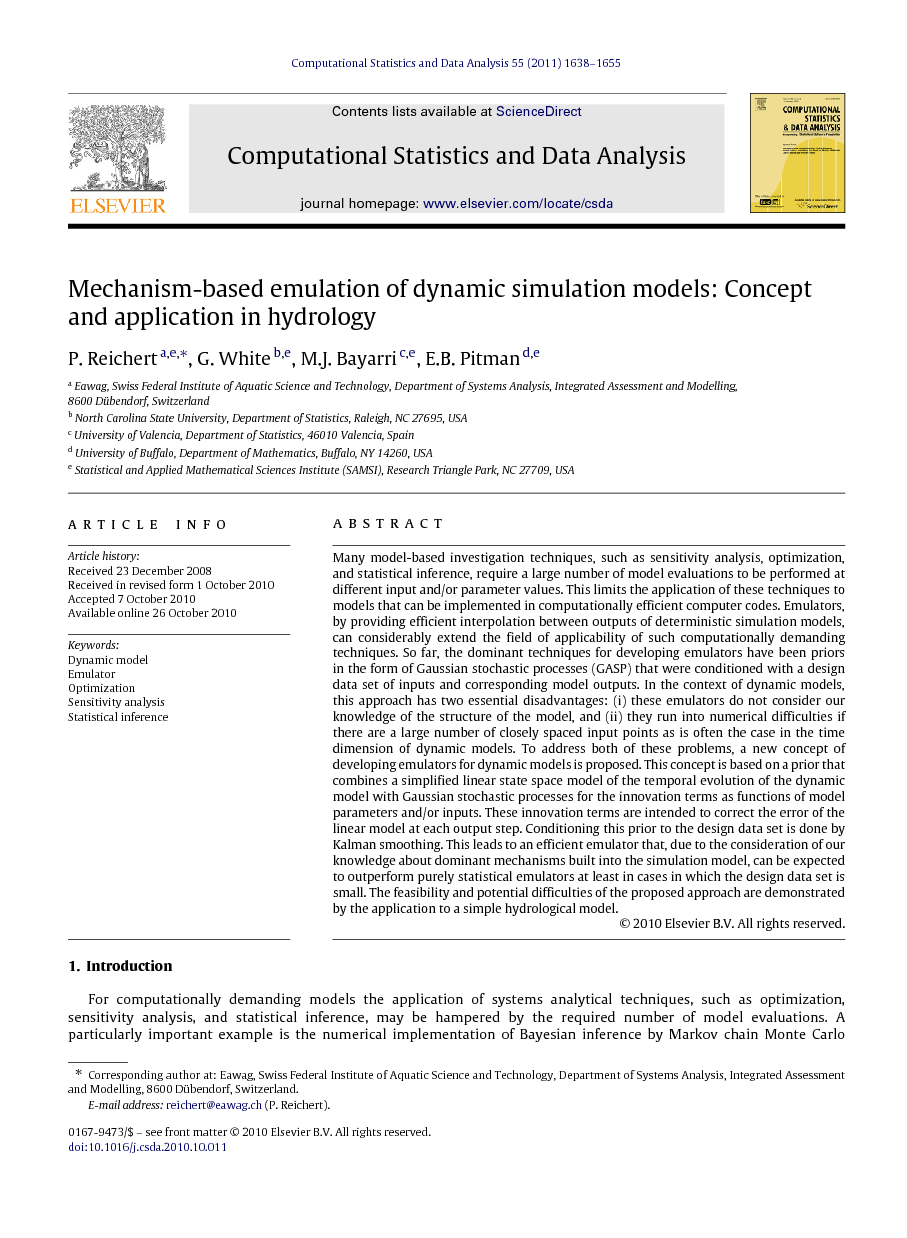 Many model-based investigation techniques, such as sensitivity analysis, optimization, and statistical inference, require a large number of model evaluations to be performed at different input and/or parameter values. This limits the application of these techniques to models that can be implemented in computationally efficient computer codes. Emulators, by providing efficient interpolation between outputs of deterministic simulation models, can considerably extend the field of applicability of such computationally demanding techniques. So far, the dominant techniques for developing emulators have been priors in the form of Gaussian stochastic processes (GASP) that were conditioned with a design data set of inputs and corresponding model outputs. In the context of dynamic models, this approach has two essential disadvantages: (i) these emulators do not consider our knowledge of the structure of the model, and (ii) they run into numerical difficulties if there are a large number of closely spaced input points as is often the case in the time dimension of dynamic models. To address both of these problems, a new concept of developing emulators for dynamic models is proposed. This concept is based on a prior that combines a simplified linear state space model of the temporal evolution of the dynamic model with Gaussian stochastic processes for the innovation terms as functions of model parameters and/or inputs. These innovation terms are intended to correct the error of the linear model at each output step. Conditioning this prior to the design data set is done by Kalman smoothing. This leads to an efficient emulator that, due to the consideration of our knowledge about dominant mechanisms built into the simulation model, can be expected to outperform purely statistical emulators at least in cases in which the design data set is small. The feasibility and potential difficulties of the proposed approach are demonstrated by the application to a simple hydrological model.

For computationally demanding models the application of systems analytical techniques, such as optimization, sensitivity analysis, and statistical inference, may be hampered by the required number of model evaluations. A particularly important example is the numerical implementation of Bayesian inference by Markov chain Monte Carlo techniques (Gelman et al., 2004 and Gamerman, 2006). This is a problem, because the combination of information from data with prior knowledge (to account for the poor identifiability of the parameters of many complex simulation models), and the need of addressing model deficiency, require the use of Bayesian techniques (Kennedy and O’Hagan, 2001 and Bayarri et al., 2007b). There are two obvious strategies for dealing with this problem: improving the efficiency of the evaluation of the model (including simplifying the model if possible) and improving the efficiency of the computationally demanding technique to be applied. As an additional option, computationally demanding model runs can be replaced by the evaluation of an efficient emulator of the model. An emulator is a statistical approximation of a deterministic model (O’Hagan, 2006). It provides a probability distribution expressing the combination of our prior knowledge of the simulation results with the information gained from runs of the full model at carefully chosen design parameter values. As there is no “measurement error” when emulating a deterministic simulation model, there is no uncertainty in emulation results corresponding to design parameter values. Note that we can also use the emulator as a deterministic interpolator by taking the mean of its probability distribution. As the evaluation of the emulator is (designed to be) fast, replacing the model by the emulator makes computationally expensive systems analytical techniques available even for computationally demanding models. For this reason, emulators of deterministic models have gained considerable attention in the literature over the recent years (Sacks et al., 1989, Currin et al., 1991, O’Hagan, 1992, Craig et al., 2001, Kennedy and O’Hagan, 2001, Oakley and O’Hagan, 2002, Santner et al., 2003, O’Hagan, 2006, Bayarri et al., 2007b and Bayarri et al., 2007a). Most of these emulators are based on the formulation of a prior of the model output or of residual terms of a linear combination of adequately chosen basis functions in the form of a Gaussian stochastic process (GASP).

In this paper we propose a new concept for the construction of mechanism-based emulators of dynamic simulation models (simulators). This concept is based on the idea of combining a simplified, linear representation of the simulation model with innovation terms formulated as Gaussian stochastic processes in parameter space. The inclusion of mechanistic knowledge of the simulation model is assumed to improve the interpolation quality of the emulator. This is of particular importance if the design data set is small. In addition, our emulator eliminates the numerical problems that would occur with purely Gaussian process based emulators when using time as an additional input dimension (that is densely covered with design points). The application of this concept to a simple hydrological model demonstrates its feasibility. The emulator provides fast interpolation of model outputs within a domain of parameter space. As this domain was chosen to be large and the parameter space is of dimension 8, the size of the design set of 100 is too small to yield a very precise approximation. Nevertheless the emulation is certainly much better than when using an emulator that does not consider the mechanisms underlying the simulation model. The objective of this paper was to introduce the new concept of constructing a mechanism-based emulator of a dynamic simulation model and to prove its feasibility. However, further development is needed to improve its performance. The most important extension will be to estimate emulator parameters. While the emulator as used in this paper has the advantage of facilitating its inclusion into a full Bayesian analysis of observed data, the extension to emulator parameter estimation is important. In addition, the disadvantage associated with not estimating emulator parameters may be smaller for a mechanism-based emulator, compared to a purely statistical emulator. Emulator parameter estimation will be addressed in a separate study (White and Reichert, in preparation). Another important field of further testing will be the application of the emulator to more complex models e.g. models that solve one-, two- or three-dimensional partial differential equations as they occur in open channel flow or fluid dynamics models. For such models, the methodology introduced in this paper would have to be extended to accommodate spatially discretized models MM and M′M′.