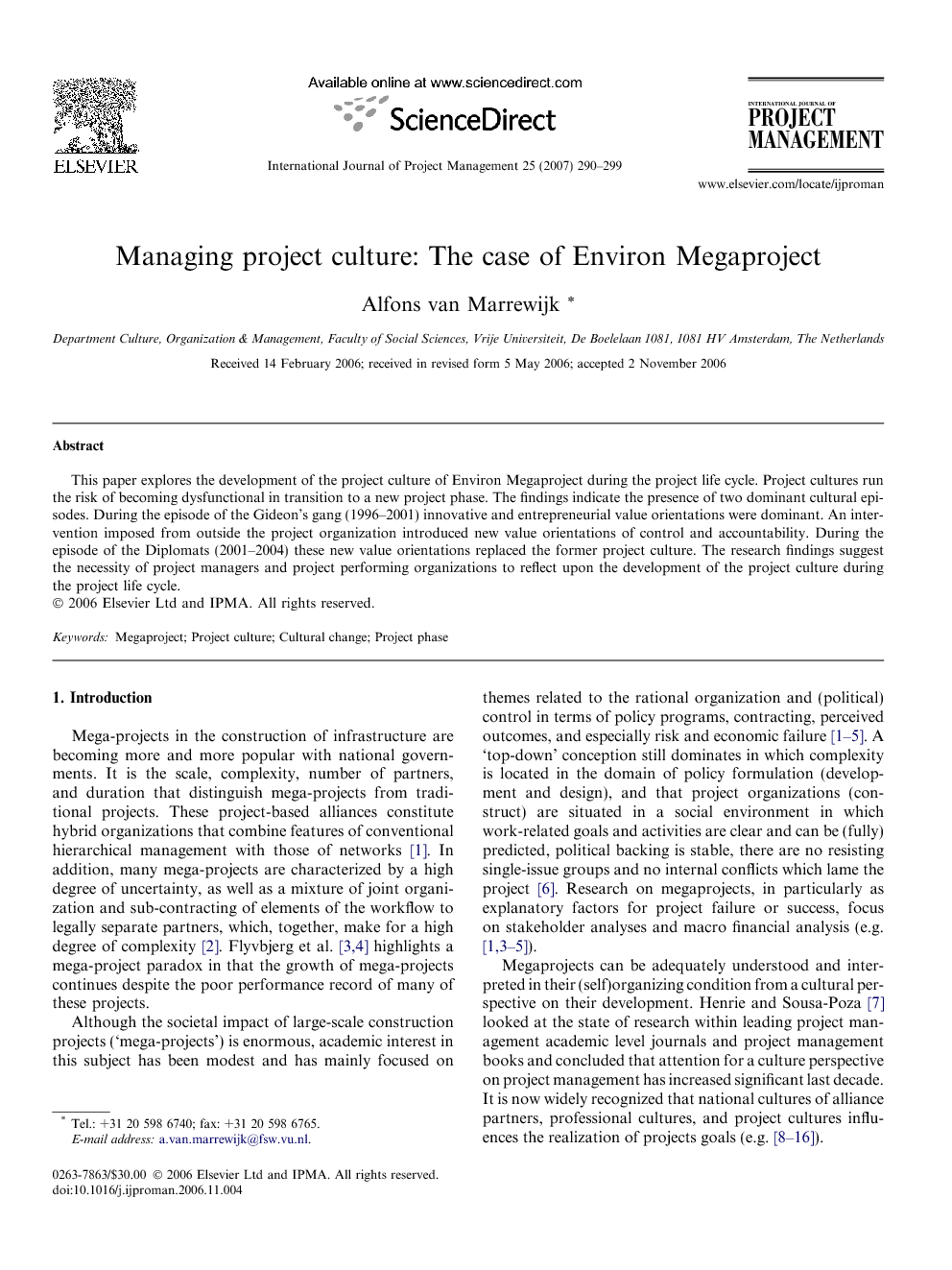 Mega-projects in the construction of infrastructure are becoming more and more popular with national governments. It is the scale, complexity, number of partners, and duration that distinguish mega-projects from traditional projects. These project-based alliances constitute hybrid organizations that combine features of conventional hierarchical management with those of networks [1]. In addition, many mega-projects are characterized by a high degree of uncertainty, as well as a mixture of joint organization and sub-contracting of elements of the workflow to legally separate partners, which, together, make for a high degree of complexity [2]. Flyvbjerg et al. [3] and [4] highlights a mega-project paradox in that the growth of mega-projects continues despite the poor performance record of many of these projects. Although the societal impact of large-scale construction projects (‘mega-projects’) is enormous, academic interest in this subject has been modest and has mainly focused on themes related to the rational organization and (political) control in terms of policy programs, contracting, perceived outcomes, and especially risk and economic failure [1], [2], [3], [4] and [5]. A ‘top-down’ conception still dominates in which complexity is located in the domain of policy formulation (development and design), and that project organizations (construct) are situated in a social environment in which work-related goals and activities are clear and can be (fully) predicted, political backing is stable, there are no resisting single-issue groups and no internal conflicts which lame the project [6]. Research on megaprojects, in particularly as explanatory factors for project failure or success, focus on stakeholder analyses and macro financial analysis (e.g. [1], [3], [4] and [5]). Megaprojects can be adequately understood and interpreted in their (self)organizing condition from a cultural perspective on their development. Henrie and Sousa-Poza [7] looked at the state of research within leading project management academic level journals and project management books and concluded that attention for a culture perspective on project management has increased significant last decade. It is now widely recognized that national cultures of alliance partners, professional cultures, and project cultures influences the realization of projects goals (e.g. [8], [9], [10], [11], [12], [13], [14], [15] and [16]). This paper explores the case of the Environ Megaproject from a cultural perspective.1 This multi-billion Euro project is one of the largest and most ambitious infrastructural projects in Otherland. A number of arguments make this case interesting to study. In the first place, the project is a Public Private Partnership in which a complex network of public and private organizations cooperate under the supervision of the Environ Megaproject organization. In the second place, the independent project organization developed a clearly distinctive culture over time. In the third place, the project had to be highly flexible and adaptable due to innovative technologies, unsure outcomes, and a dynamic context. Finally, the project attracted much public and political attention due to a parliamentary enquiry on costs overrun and time delays. The first part of this paper explores a cultural perspective on project management. The second part focuses on cultural change in projects. The third part discusses the research methodology used. The fourth part introduces the case of the Environ Megaproject and presents the findings. The fifth part gives the main implications of the research findings for project managers and project performing organizations. Finally, conclusions are drawn.

This paper explored the case of the Environ Megaproject from a cultural perspective and discussed its cultural development during the project life cycle. In the episode of the Gideon’s gang (1996–2001) the Environ Megaproject developed a project culture in which value orientations such as innovativeness, creativeness, non-traditionalistic, and independency were dominant. The fighting spirit was the stronghold of the Environ Megaproject during the decision making phase and was functional to face the ambiguities, turbulence, and political changes. However, in the realization phase the project culture was contra productive, as other value orientations were needed. The fighting spirit has become dysfunctional and political pressure for financial control of the project increased. Cultural mutations from the ministry of Public Work and other organizations did only marginally influence the project’s fighting spirit. Strategies of cultural transformation are needed when organization cultures become dysfunctional [27]. The episode of the Diplomats (2001–2004) started with an intervention by the ministry of Public Works introducing a new project director. The aggressive strategy of cultural change was intended to introduce new value orientations during the realization phase such as control, financial accountability, integrity, stability and lawfulness. Power instruments that have been used included; centralization of authorization, replacement of managers, integration of offices, and strengthening of managerial control. The process of cultural diffusion between the ministry of Public Works and the Environ Megaproject resulted in a collapse of the latter culture. The case has shown the difficulty to reflect upon cultural changes in the Environ Megaproject. For organizations in the infrastructure it will be hard to avoid the paradox of change; changing the organizational culture from within the organization. Reflection on strategies of cultural change is of importance as organizations in the infrastructure sector are world wide confronted with fundamental changes in the relation of commissioners and clients. To adapt these changes successfully, organizations have to learn to think “culturally” and reflect upon possible dysfunctional cultural elements.