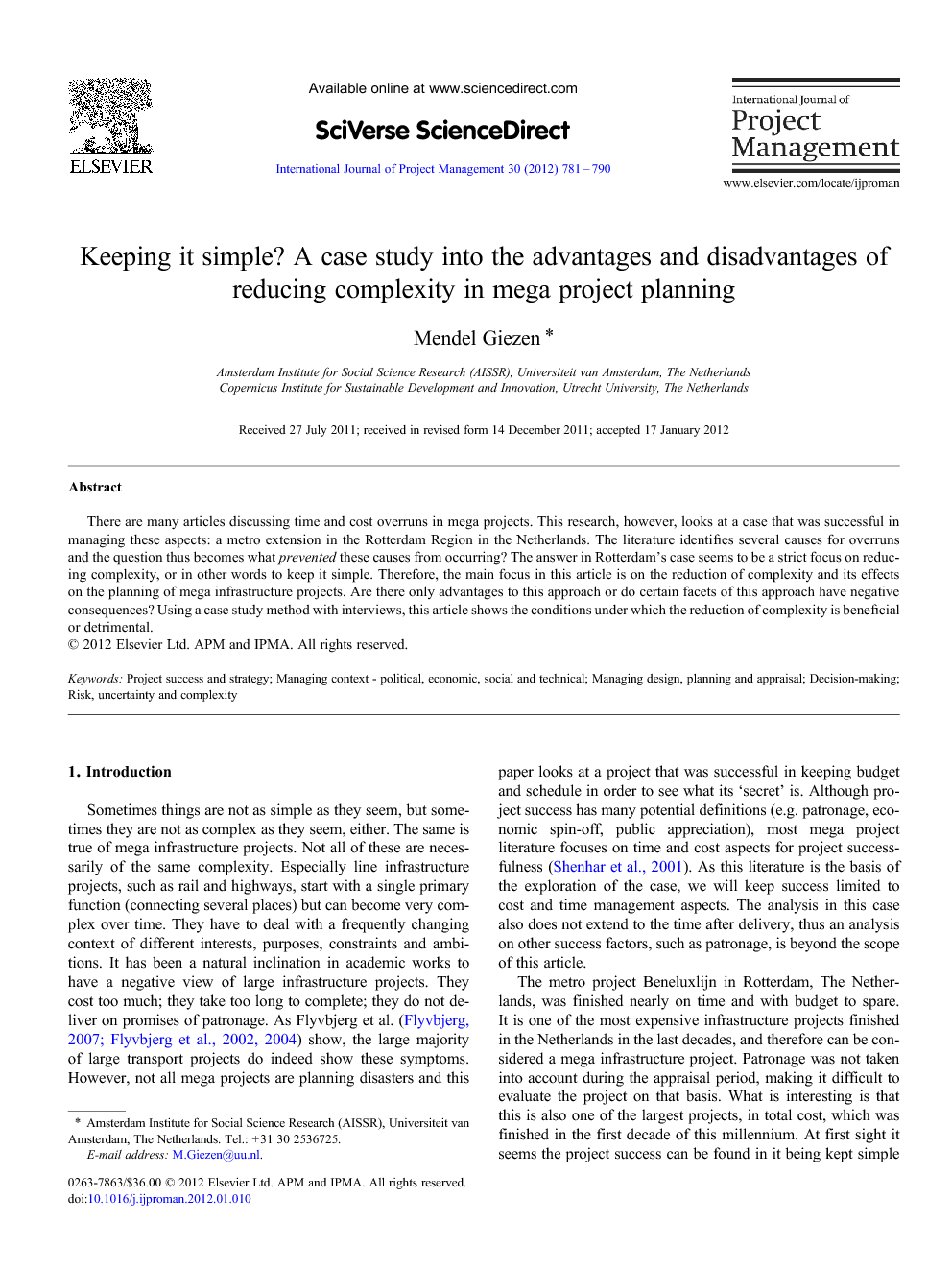 There are many articles discussing time and cost overruns in mega projects. This research, however, looks at a case that was successful in managing these aspects: a metro extension in the Rotterdam Region in the Netherlands. The literature identifies several causes for overruns and the question thus becomes what prevented these causes from occurring? The answer in Rotterdam's case seems to be a strict focus on reducing complexity, or in other words to keep it simple. Therefore, the main focus in this article is on the reduction of complexity and its effects on the planning of mega infrastructure projects. Are there only advantages to this approach or do certain facets of this approach have negative consequences? Using a case study method with interviews, this article shows the conditions under which the reduction of complexity is beneficial or detrimental.

Sometimes things are not as simple as they seem, but sometimes they are not as complex as they seem, either. The same is true of mega infrastructure projects. Not all of these are necessarily of the same complexity. Especially line infrastructure projects, such as rail and highways, start with a single primary function (connecting several places) but can become very complex over time. They have to deal with a frequently changing context of different interests, purposes, constraints and ambitions. It has been a natural inclination in academic works to have a negative view of large infrastructure projects. They cost too much; they take too long to complete; they do not deliver on promises of patronage. As Flyvbjerg et al. (Flyvbjerg, 2007, Flyvbjerg et al., 2002 and Flyvbjerg et al., 2004) show, the large majority of large transport projects do indeed show these symptoms. However, not all mega projects are planning disasters and this paper looks at a project that was successful in keeping budget and schedule in order to see what its ‘secret’ is. Although project success has many potential definitions (e.g. patronage, economic spin-off, public appreciation), most mega project literature focuses on time and cost aspects for project successfulness (Shenhar et al., 2001). As this literature is the basis of the exploration of the case, we will keep success limited to cost and time management aspects. The analysis in this case also does not extend to the time after delivery, thus an analysis on other success factors, such as patronage, is beyond the scope of this article. The metro project Beneluxlijn in Rotterdam, The Netherlands, was finished nearly on time and with budget to spare. It is one of the most expensive infrastructure projects finished in the Netherlands in the last decades, and therefore can be considered a mega infrastructure project. Patronage was not taken into account during the appraisal period, making it difficult to evaluate the project on that basis. What is interesting is that this is also one of the largest projects, in total cost, which was finished in the first decade of this millennium. At first sight it seems the project success can be found in it being kept simple in process, and project scope and management. However, was this indeed key to its success and did it come at a cost? Keeping it Simple Stupid, or the KISS principle, (Terano, 2008) is a common expression (albeit with slight variations) in project management and ICT. It is a design standard that aims to keep the used techniques, originally in aerospace engineering, as uncomplicated as possible (simple) and as easy as possible to understand and repair (stupid). Keeping it simple is, more formally put, the reduction of complexity. The reason for doing so is that with the reduction of complexity comes a reduction of uncertainty as complexity is often defined in relation to uncertainty (Antoniadis et al., 2011 and Bosch-Rekveldt et al., 2011). For instance, after a literature review, Vidal et al. (2011: 719) state: “project complexity is the property of a project which makes it difficult to understand, foresee and keep under control its overall behavior, even when given reasonably complete information about the project system.” The reduction of complexity means that there are fewer unknowns and fewer variables to predict, and thus the project and planning of the project arguably becomes more manageable. However, as we know from our own academic writing, simplicity is good but it often comes at the cost of richness. We feel we cannot describe the full richness of our case or data because we are limited by words and structures. The same is true for planning and decision-making processes on mega projects. The more we try to close the process and reduce the scope of the project, the less influences we get from outside and the less feedback about alternatives and uncertainties is brought into the process (Deutsch, 1966 and Innes and Booher, 2010). The ‘tunneling’ of decision-making lessens the strategic potential of cross-pollination between different trajectories and streams of policymaking (Marchau et al., 2010, Priemus, 2007 and Swyngedouw et al., 2002). Two questions are thus raised. First, what are the advantages and disadvantages of reducing complexity by simplification? And second, can we say something about the type of projects that are more appropriate for either side of the complexity dimension? This article starts with an overview of the factors behind the cost and time overruns in mega projects as identified in the literature. It relates them to issues of complexity and uncertainty because overruns are the manifestation of problems associated with these issues in this type of project. In the following section the research design is discussed. The subsequent section presents the case and the analysis of the mechanisms leading to its successful management of time and cost. The concluding section discusses the opportunities and threats of the approach identified and considers the findings in the light of existing literature.

This project was developed with the motto: to keep uncertainty in the manageable domain. Optimism bias and strategic misrepresentation were effectively and intrinsically neutralized. The project used existing technique with which there was broad experience and kept the project purely within the transport infrastructure domain. The route was kept as much as possible above ground. This simple approach was combined with strong project environment management that focused on reducing worries and frustrations with the affected neighborhoods; something that was considered crucial in bringing the uncertainties from the environment from the domain of the unknown into the domain of risk. The project actually aimed to reduce complexity and keep uncertainties within the domain of risk. Although the benefits are clear of reducing complexity and uncertainty, there are also some evident disadvantages that manifest themselves in a project of this type. Most importantly, a project could become too simple. The focus on keeping a tight control on time and budget could lead to an underperformance in integrating different sectors and influences that might add value to the project. The Beneluxlijn was developed primarily from a transport infrastructure perspective as a relatively uncontroversial, inexpensive and quick solution. Developing a strategic vision on land use developments along the route was a secondary concern to realizing the more narrow goals of the project. Hence, while the built quality of the project is good, the quality as a spatial project, or rather as a leverage for broader spatial developments, is very limited. Perhaps for the Beneluxlijn this was the best solution in order to make use of the window of opportunity provided by the Beneluxtunnel and the lump sum financing arrangement with the national government. I would argue that whether this should be the preferred strategy depends on the context of the project and the vision that is developed for the region as a whole. Form should follow function in these types of projects and not the other way around. Infrastructure should be an instrument to achieve particular goals and ambitions. Retrofitting a project later for future developments, like including a new stop, is generally a more expensive and complex solution. This means that it is important to have a clear view on the problems that the project will have to solve; both now and to a certain extent in the future. Often, and the Beneluxlijn is no exception, projects start as a project which becomes a goal in itself and not as the best possible solution to a particular problem (Priemus et al., 2008). But the project should also be a tool to fulfill the strategic vision and goals for an area. Because infrastructure is a very definite spatial intervention with a huge investment cost, it determines for a large part what is possible for the area it passes through for the foreseeable future. The risk of a strong focus on simplification or the reduction of complexity is that the strategic potential of a project is ignored. Feedback in the form of new ideas and critiques are filtered out to early on, and the adaptive and strategic capacity is lost (Bertolini, 2007). Would the Beneluxlijn have benefitted from a more open strategic process? Perhaps, but, more likely, it would have just not been built. As outlined earlier, other extensions to the metro network would have been more preferable. Several respondents stated that the project was the least important one of the 3M report. However, the policy window opened with the decision to build the tunnel and the availability of the lump sum required swift action on the part of the local government. The strategic 3M document was aimed at infrastructure development, not an integrated land use and transport plan. And with the little time available, the process could not have been opened to external influences and plan development. To conclude, the Beneluxlijn offers us an insight in what it might take to keep a tight control over budget and time. Although it might be argued that the Beneluxlijn is so straightforward that it is incomparable with other mega projects, this is however the case in point. Considering its size, the project could have also evolved into an extremely complex project. Yet, the project was purposely kept simple. The project managers and decision-makers worked hard to keep uncertainty within the manageable domain of risk. As a result, the project contrasts sharply with the wealth of mega projects that wildly exceed costs and time budgets. However, it can be also argued that the project remained at a pure infrastructure level and thus lacked a strategic vision of its place within the broader spatial development of the region. The project shows that a reduction of uncertainty through simplification can be very beneficial. The trick, however, might be to combine it with a more strategic phase earlier in which there is a potential to organize knowledge, input and thus complexity in a way that adds value to the early stages of a project without adding to the complexity during the execution stage. Thus a decision-making process that accommodates influences and strategic input from outside, but keeps strict control over techniques and design, can ultimately achieve the most value while keeping the project simple and stupid.