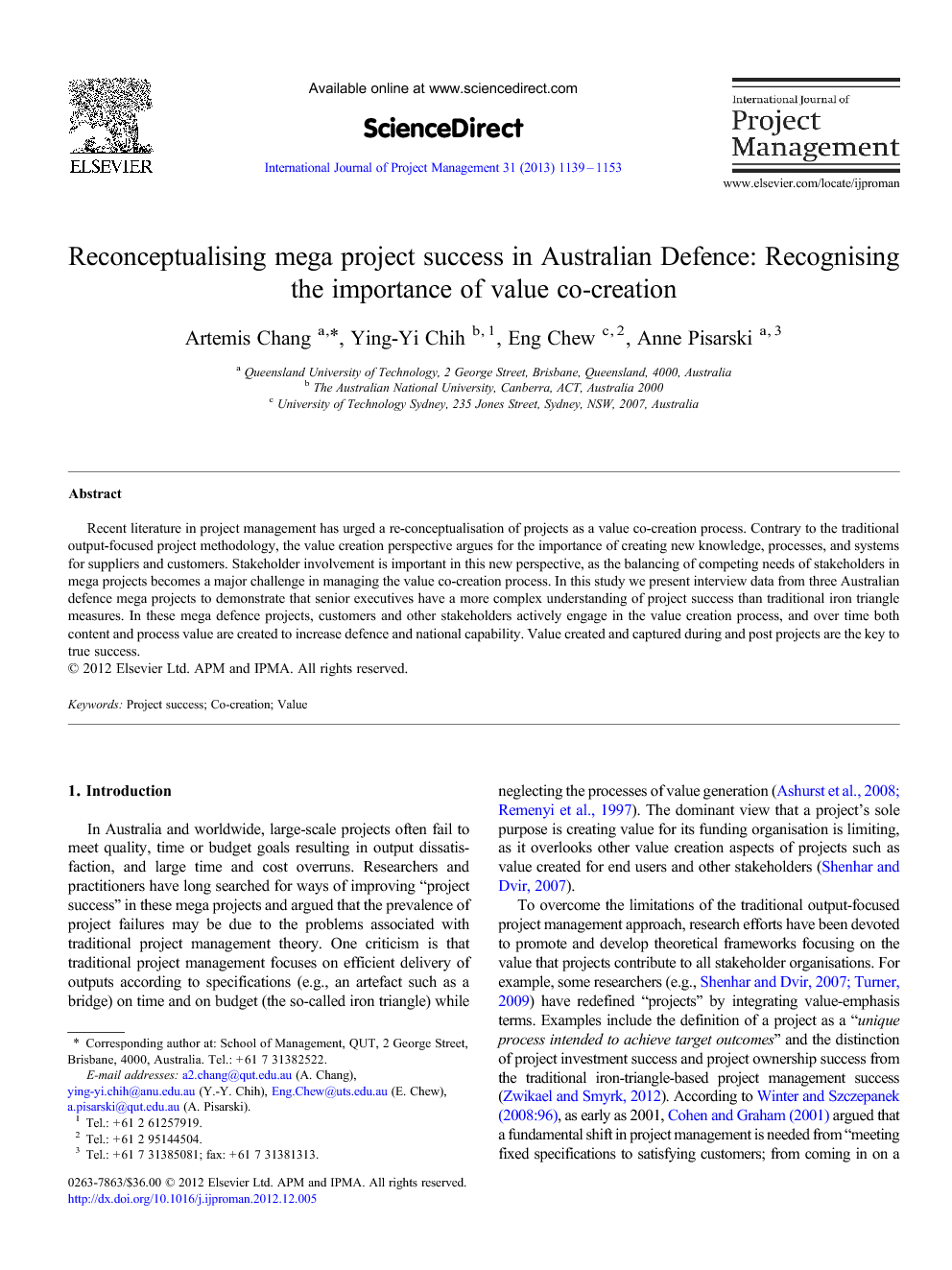 Recent literature in project management has urged a re-conceptualisation of projects as a value co-creation process. Contrary to the traditional output-focused project methodology, the value creation perspective argues for the importance of creating new knowledge, processes, and systems for suppliers and customers. Stakeholder involvement is important in this new perspective, as the balancing of competing needs of stakeholders in mega projects becomes a major challenge in managing the value co-creation process. In this study we present interview data from three Australian defence mega projects to demonstrate that senior executives have a more complex understanding of project success than traditional iron triangle measures. In these mega defence projects, customers and other stakeholders actively engage in the value creation process, and over time both content and process value are created to increase defence and national capability. Value created and captured during and post projects are the key to true success.

Building on the view that projects are conceptualised as a value creation process for various stakeholders, we presented three case studies on mega Australian defence projects. The results revealed a diverse view of stakeholders on what constitutes project success and the importance of engaging stakeholders throughout the project life cycle in co-creating project value. As with most research, this study has certain acknowledged limitations. First, the current research focuses on just defence projects in Australia. It thus limits the generalisation of results. Further case studies on projects in different sectors and countries represent an opportunity for future research. In addition, this study mainly incorporates views on value co-creation from a project owner's perspective. Future opportunities exist in involving other groups of stakeholders more extensively in such study. Nonetheless, this research makes a theoretical and practical contribution to the emerging literature on value co-creation in the project context. Theoretically, the insights accrued from these case studies provide empirical support to the view that measures for project success need to be broadened beyond the traditional iron-triangle. It also adds new empirical knowledge to the relatively recent re-conceptualisation of projects as value co-creation processes, in particular, the content of value and the processes to create and capture value in projects. Such knowledge can provide guidance for the further development of a theoretical framework of value co-creation in projects. This paper makes a practical contribution through the analysis of three case studies illustrating the diverse perceptions of project success and value co-creation practices in defence industry. The findings suggest that the management of future mega projects should actively engage stakeholders throughout the project life. This is critical not only in identifying and solving problems but also in managing their expectations. This need to engage stakeholders throughout project life may pose new challenges to different project participants ranging from senior executives in the organisation, project managers, teams and stakeholders. New sets of skills and knowledge mindsets will be required.