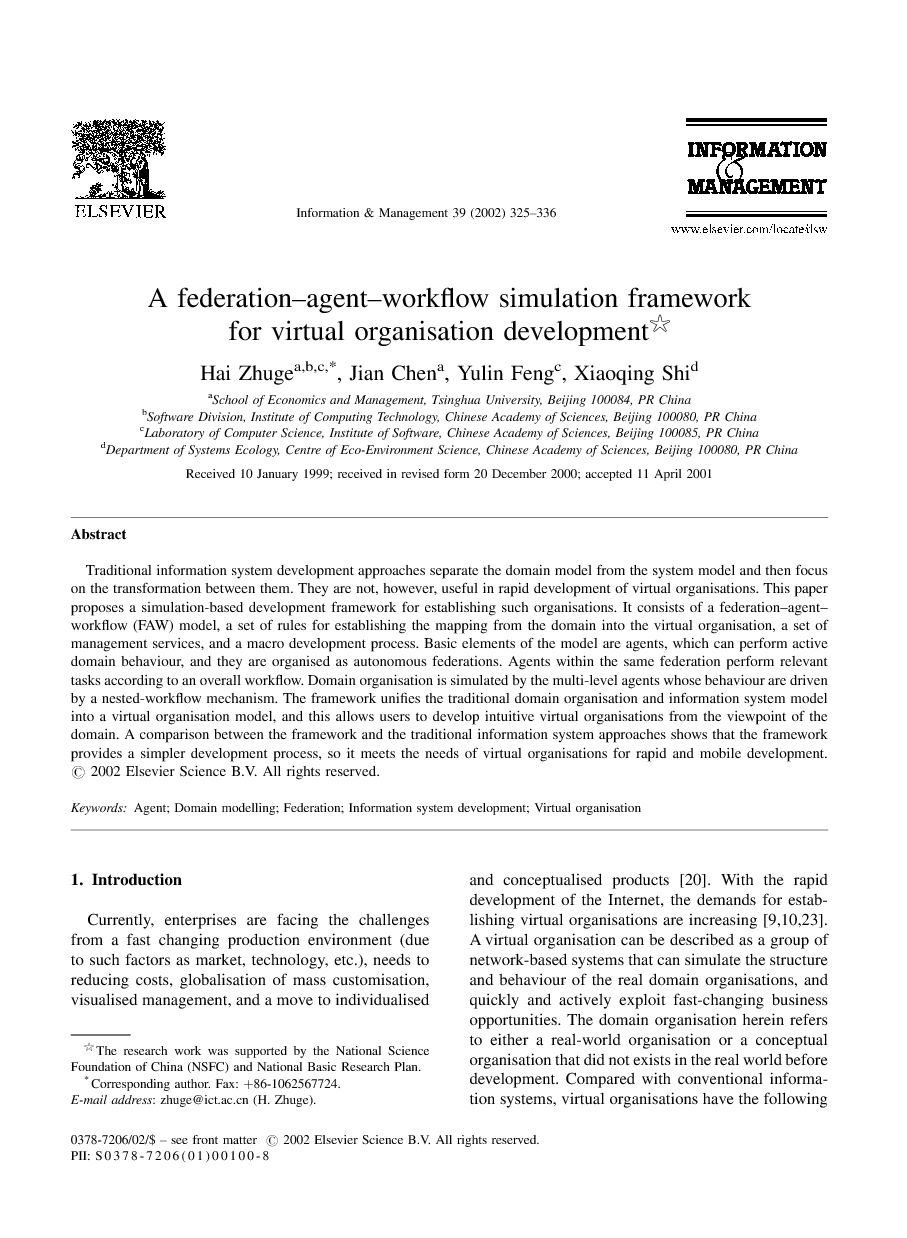 Currently, enterprises are facing the challenges from a fast changing production environment (due to such factors as market, technology, etc.), needs to reducing costs, globalisation of mass customisation, visualised management, and a move to individualised and conceptualised products [20]. With the rapid development of the Internet, the demands for establishing virtual organisations are increasing [9], [10] and [23]. A virtual organisation can be described as a group of network-based systems that can simulate the structure and behaviour of the real domain organisations, and quickly and actively exploit fast-changing business opportunities. The domain organisation herein refers to either a real-world organisation or a conceptual organisation that did not exists in the real world before development. Compared with conventional information systems, virtual organisations have the following main characteristics: (1) autonomous management, virtual organisation can run according to predefined tasks and management rules; (2) active behaviour, any member can actively perform its task according to their own decision; (3) intuitiveness, virtual organisation is the simulation of the domain organisation; (4) adaptability and agility, virtual organisation can adapt to the changes in the domain organisation. The information infrastructure framework for virtual organisation management provides information exchange among the virtual organisation, its customers, and the general support techniques and approaches [21]. Besides the information structure, the system architecture and the development approaches are the keys to the implementation of a virtual organisation. The strategies for planning the information system of decentralised organisations with autonomous sub-divisions and functional units were investigated in [24]. The traditional information system development approaches are the ways to develop a virtual organisation, but these approaches model the domain business from the (software or hardware) system point of view, and it requires the users and the developers to be familiar with the domain, the development approach used, and the software system. The prototyping approach focuses on the evolution of the system from the system point of view. But users have to understand the system architecture, concepts, functions, and evolution from the system point of view. The structured approach separates the domain model from the system model and then focuses on the transformation between them through several stages; this results in a long development period, rigid development process, high cost, and the difficulty of understanding the specifications at different stages and the transformations between the specifications. Object-oriented approach uses an uniform “object” point of view to conceptualise the domain and the software systems. Graphical notation languages, such as UML [4], are used for establishing the domain model. Unfortunately, these languages are more suitable for developers. Domain users are seldom familiar with them. Besides, software tools are needed to assist the transformation from the system specification into an operational system. In the simulation field, a general high-level architecture (HLA) has been proposed for developing the simulation systems [13]. A federation concept is defined as an autonomous domain object set that is to be used to simulate the real-world organisation. The behaviour simulation is supported by a run-time infrastructure. The purpose of the HLA is to facilitate the inter-operability between the simulation components and to promote their reusability. However, the object-based federation mechanism cannot reflect the active behaviour and the dynamic relationships between the behaviour. An agent technique can be used to simulate the active behaviour. Besides its object-orientation, an agent can actively perform tasks. Agent was formally described as automata in [11]. Communication languages like KQML were proposed for communicating between multiple agents [7] and [18]. The co-operations and negotiations in the multi-agent environments as well as the time constraints have been investigated [12]. Agents can also be used to model qualitative decision-makers [6]. The temporal coherence problems in the multi-agent systems have been investigated [5]. In the software development field, the agent concept has also been used to establish a dynamic system model [16], but such development models are defined from the viewpoint of software. The main intent of this paper is to form a framework that can support the rapid, intuitive, and mobile development of virtual organisations from the domain point of view. We use a federation hierarchy to model the domain organisation architecture, use the agent mechanism to model the active domain behaviour, and use the workflow mechanism to model the control of the domain behaviour. Every basic federation consists of a set of related agents. Any agent actively performs its task according to the federation task, the intra-federation (inter-agent) workflow, and the intra-agent workflow. A nest-workflow is used to reflect the different-level work co-operation of the virtual organisation, and it is responsible for driving the multi-level virtual organisation to implement the tasks in the predefined logical order and temporal order.