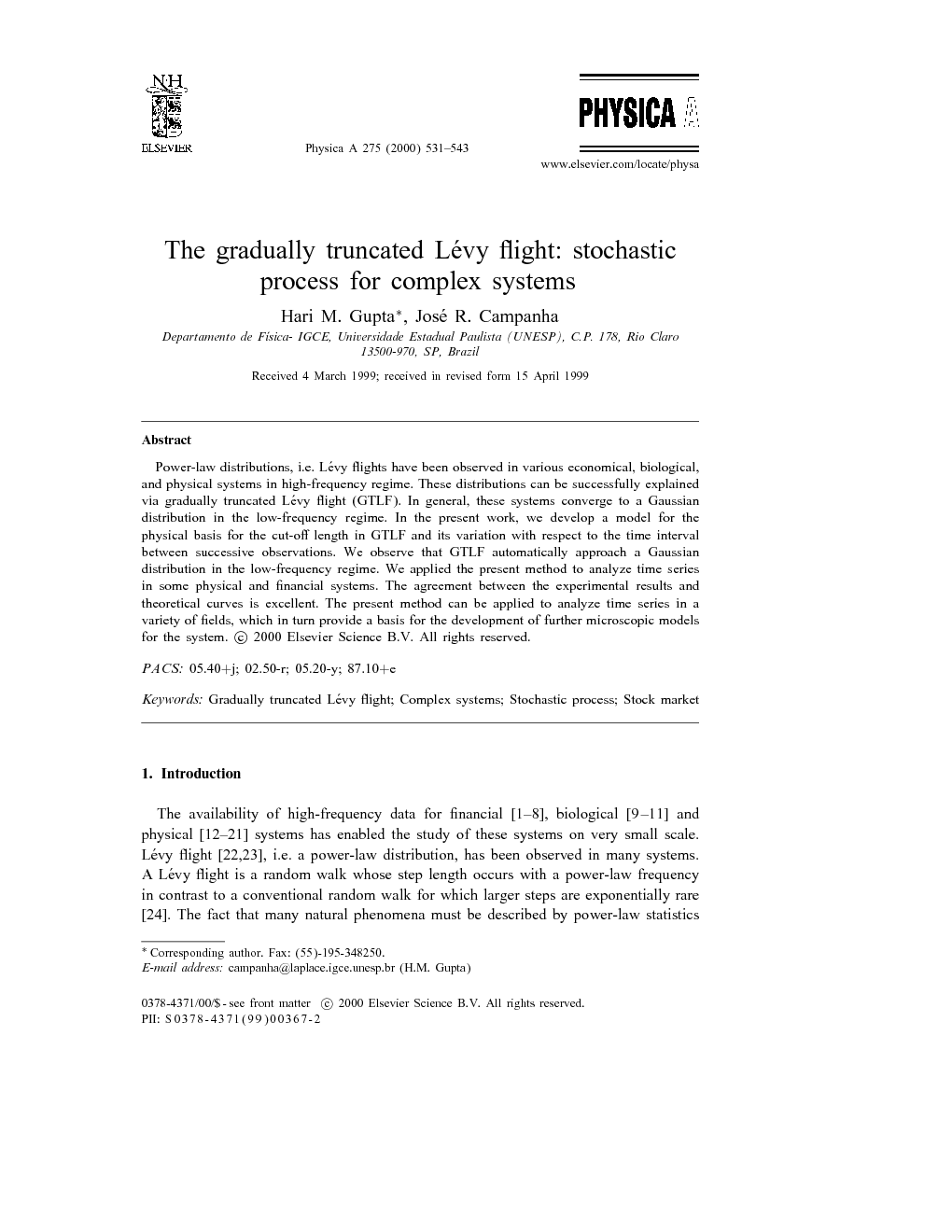 Power-law distributions, i.e. Lévy flights have been observed in various economical, biological, and physical systems in high-frequency regime. These distributions can be successfully explained via gradually truncated Lévy flight (GTLF). In general, these systems converge to a Gaussian distribution in the low-frequency regime. In the present work, we develop a model for the physical basis for the cut-off length in GTLF and its variation with respect to the time interval between successive observations. We observe that GTLF automatically approach a Gaussian distribution in the low-frequency regime. We applied the present method to analyze time series in some physical and financial systems. The agreement between the experimental results and theoretical curves is excellent. The present method can be applied to analyze time series in a variety of fields, which in turn provide a basis for the development of further microscopic models for the system.

The availability of high-frequency data for financial [1], [2], [3], [4], [5], [6], [7] and [8], biological [9], [10] and [11] and physical [12], [13], [14], [15], [16], [17], [18], [19], [20] and [21] systems has enabled the study of these systems on very small scale. Lévy flight [22] and [23], i.e. a power-law distribution, has been observed in many systems. A Lévy flight is a random walk whose step length occurs with a power-law frequency in contrast to a conventional random walk for which larger steps are exponentially rare [24]. The fact that many natural phenomena must be described by power-law statistics has only been accepted in the past decade [25] and [26]. Correspondingly, an intense activity has developed in order to understand both the physical content of the mathematical tools devised by P. Lévy and others [12], [22] and [23] and the origin of these ubiquitous power law tails. This has led to the concept of self-organized criticality [27] and [28]. Tsallis et al. [29], [30], [31] and [32] extended Boltzmann–Gibbs statistics to a Generalized Statistical Mechanics and Thermodynamics to consider long-range jumps and were able to provide a strong theoretical support for describing processes with power-law statistics. Lévy flights have infinite variance which discourages a physical approach and an unavoidable cut off is always present which is explained through boundary conditions or spatio-temporal coupling or some similar mechanisms. Mantegna and Stanley [33], introduced the truncated Lévy flight (TLF) to solve the problem of infinite variance, in which the probability of taking a step is abruptly cut to zero at a certain critical step size. Koponen [34] discussed the problem of convergence of TLF towards the Gaussian stochastic process, in which, he gradually truncated the probability distribution from the beginning. In real systems the distribution is given very well through Lévy distribution for smaller and larger steps. It fails only for extremely large steps, which means that we need to cut only the extremely large steps. Physically, we can justify it as a gradual decrease of positive feedback for very large steps due to physical limitations of the system. The positive feedback is responsible for fatter tails in Lévy distribution. Recently, Gupta and Campanha [35] proposed a new stochastic distribution, the gradually truncated Lévy flight (GTLF) for these systems in high-frequency regime. In the GTLF, the probability distribution is cut-off gradually only after a certain critical length. The GTLF model approximates better probability distribution in real systems. The GTLF has finite variance and an analytical solution in a closed form is possible. It is a general tendency in these systems to approach a Gaussian distribution in the large scale i.e. in the low-frequency regime. This is also expected here via the central limit theorem (CLT), which is fundamental to statistical mechanics [24] and states that the summation equation(1) View the MathML source of n stochastic variables {x} that are statistically independent, identically distributed and, with a finite variance, converges to a normal (Gaussian) stochastic process when n→∞. xi is the step size of the ith observation. Thus in order to analyze completely a system with power-law distribution in a closed form, it is important to develop a statistical distribution in which a controlling mechanism is incorporated in the distribution itself to discourage larger steps such that: 1. Variance is finite. 2. The probability of taking a step decreases gradually and not abruptly with the step size. 3. The distribution gives rise to power-law distribution in high-frequency regime, while approaches to a Gaussian (normal) distribution in low-frequency regime. In the present paper, we extend the GTLF [35] in which we have combined statistical distribution factor and a controlling mechanism. We discuss the variation of controlling parameters with the increase of time difference between successive observations. This allows us to generate a number of theoretical curves for the same system by varying the time difference between successive observations. The comparison with experimental curves, particularly the data approaching the normal distribution in the low-frequency regime give more critical test of the theory. We also present a possible physical basis for the parameters of this controlling mechanism. Finally, we apply the present distribution in some physical and financial systems.

In order to discuss a given system completely through GTLF, we need five parameters. α and γ are obtained from the central part of the high-frequency regime in which power-law (Lévy) distribution is observed. lC and k are obtained through standard deviation and from the point at which actual distribution begins to deviate from Lévy distribution. These parameters depend on the time-dependent physical limitations, i.e. physical capacity or boundary conditions. L can be estimated via its behavior in low-frequency regime which in turn depends on overall time-independent boundary conditions. In the present paper, we have developed a complete theory of the gradually truncated Lévy flight (GTLF) distribution which gives universal statistical behavior of physical as well as social complex systems and is valid both at small and large scales. Gaussian distribution is an approximate case for larger scales, which is a basic requirement in Statistical Mechanics. Through GTLF, we can completely analyze time series observed in various social and physical systems. Knowledge of the parameters of the distribution and their variations can probe the dynamical behavior of the system and provide a framework within which to develop further microscopic models of the system.