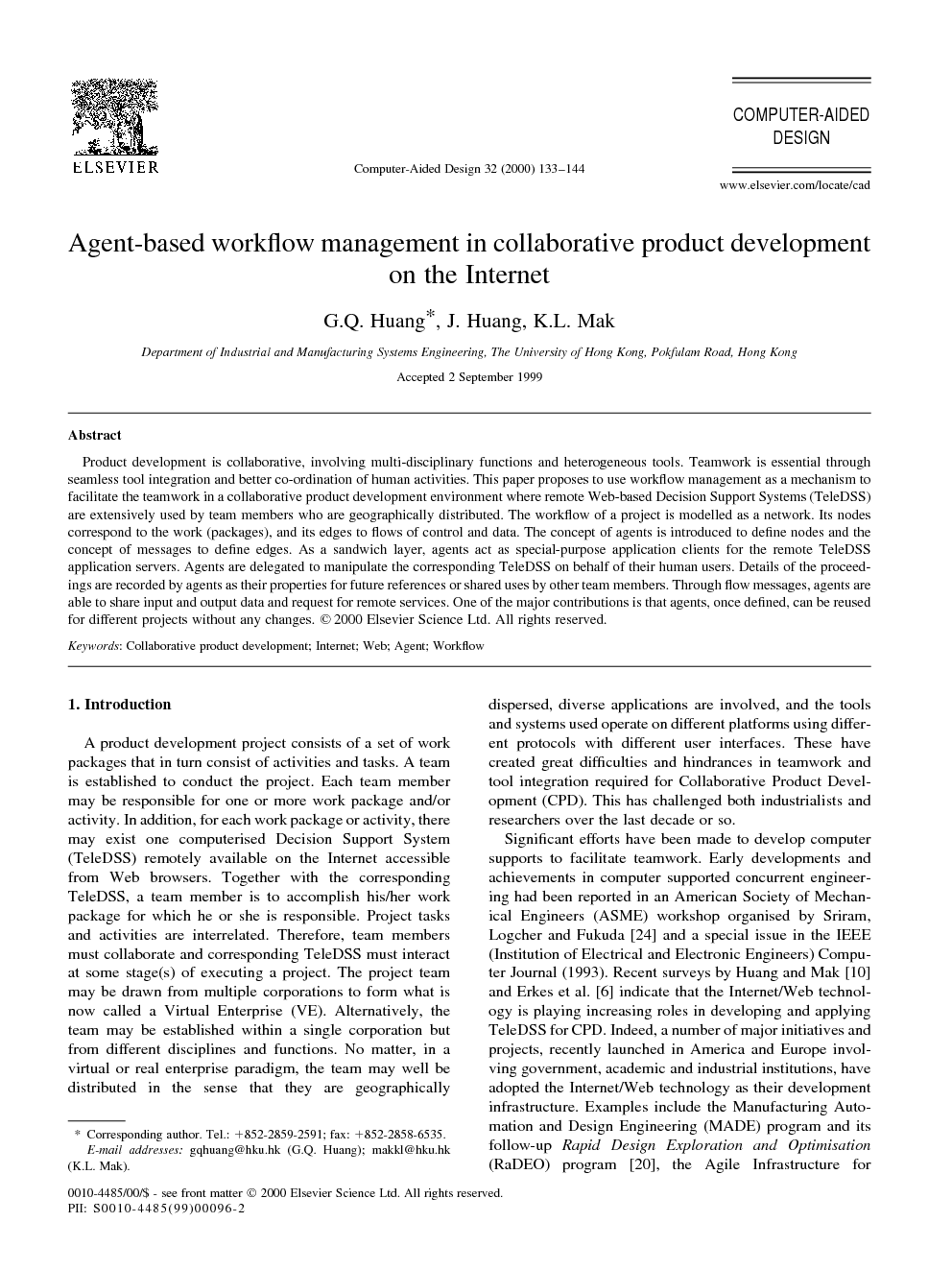 Product development is collaborative, involving multi-disciplinary functions and heterogeneous tools. Teamwork is essential through seamless tool integration and better co-ordination of human activities. This paper proposes to use workflow management as a mechanism to facilitate the teamwork in a collaborative product development environment where remote Web-based Decision Support Systems (TeleDSS) are extensively used by team members who are geographically distributed. The workflow of a project is modelled as a network. Its nodes correspond to the work (packages), and its edges to flows of control and data. The concept of agents is introduced to define nodes and the concept of messages to define edges. As a sandwich layer, agents act as special-purpose application clients for the remote TeleDSS application servers. Agents are delegated to manipulate the corresponding TeleDSS on behalf of their human users. Details of the proceedings are recorded by agents as their properties for future references or shared uses by other team members. Through flow messages, agents are able to share input and output data and request for remote services. One of the major contributions is that agents, once defined, can be reused for different projects without any changes.

A product development project consists of a set of work packages that in turn consist of activities and tasks. A team is established to conduct the project. Each team member may be responsible for one or more work package and/or activity. In addition, for each work package or activity, there may exist one computerised Decision Support System (TeleDSS) remotely available on the Internet accessible from Web browsers. Together with the corresponding TeleDSS, a team member is to accomplish his/her work package for which he or she is responsible. Project tasks and activities are interrelated. Therefore, team members must collaborate and corresponding TeleDSS must interact at some stage(s) of executing a project. The project team may be drawn from multiple corporations to form what is now called a Virtual Enterprise (VE). Alternatively, the team may be established within a single corporation but from different disciplines and functions. No matter, in a virtual or real enterprise paradigm, the team may well be distributed in the sense that they are geographically dispersed, diverse applications are involved, and the tools and systems used operate on different platforms using different protocols with different user interfaces. These have created great difficulties and hindrances in teamwork and tool integration required for Collaborative Product Development (CPD). This has challenged both industrialists and researchers over the last decade or so. Significant efforts have been made to develop computer supports to facilitate teamwork. Early developments and achievements in computer supported concurrent engineering had been reported in an American Society of Mechanical Engineers (ASME) workshop organised by Sriram, Logcher and Fukuda [24] and a special issue in the IEEE (Institution of Electrical and Electronic Engineers) Computer Journal (1993). Recent surveys by Huang and Mak [10] and Erkes et al. [6] indicate that the Internet/Web technology is playing increasing roles in developing and applying TeleDSS for CPD. Indeed, a number of major initiatives and projects, recently launched in America and Europe involving government, academic and industrial institutions, have adopted the Internet/Web technology as their development infrastructure. Examples include the Manufacturing Automation and Design Engineering (MADE) program and its follow-up Rapid Design Exploration and Optimisation (RaDEO) program [20], the Agile Infrastructure for Manufacturing Systems (AIMS) project [1], the Technologies Enabling Agile Manufacturing (TEAM) program [25], the Global Engineering Networking (GEN) project [9], and Production Planning and Management in an Extended Enterprise (PRODNET) project [19]. More projects are emerging in other countries and regions. Demonstrative systems are being developed. CyberCut [23] and MADEFAST [5] were two well-known early experiments. Roy et al. [22] have also presented experimental workbenches for Web-based design to production, including activities such as conceptual and detail product design, process planning, Design for Manufacture, NC (Numerical Control) programming and rapid prototyping. Significant progress has been achieved in developing and applying Group or Team Decision Support Systems (GDSS). Web-based teamwork frameworks have emerged from two directions. One is from Computer Supported Collaborative Work (CSCW) and the other is from Workflow Management (WFM). The aim of applying the Web technology in CSCW is to develop Web-based framework or architecture to support teamwork or group decision-making. Participants are typically human users, rather than computer systems. One example of Web-based CSCW is the Web implementation of the GroupSystems methodology [21]. The Web technology has been applied for WFM. Resulting frameworks not only involve human participants but also software systems. WebWork [14] is an example of Web-based WFM systems based on the METEOR WFM methodology. In parallel, research on Distributed Artificial Intelligence (DAI) has resulted in Multiple Agent Systems (MAS) that can be used for enabling Web-based CPD [17]. On basis of the findings from the research into agent-based collaborative engineering, CSCW, WFM, and Web-based DSS in product design and manufacture, this research proposes a Web-based framework to facilitate, rather than automate, teamwork in CPD where TeleDSS are extensively used at geographically distributed locations. This paper focuses on the aspect of WFM, including defining, co-ordinating and monitoring the flows of work, information and control between multiple TeleDSS. The concept of agents is proposed and incorporated into the workflow network model. The project workflow integrates the tools and team members towards a common goal of the product development project. It plays significant roles in facilitating better teamwork for CPD in a Web-based environment.

This paper has described a Web-based framework for CPD. The framework integrates the concept of agents into WFM. The workflow of a product development project is represented in the network model. Network nodes represent work packages while edges represent the logical flow of work, i.e. flow of control and data. These familiar notations widely used in conventional project management are adopted in the workflow model so that user can learn them easily and quickly with minimum overheads. Furthermore, new constructs are introduced to deal with the situation where Web-based decision support systems (TeleDSS) are extensively used in product development process. A new agent model is proposed. Agents add a sandwich layer between the human users and remote services. Each agent is assumed to be responsible for one work package/activity of the project. Agents prepare input data, call the remote services, and then collect output data. All these data are captured as agent properties that are in turn recorded in a central database. This database provides opportunities for the users to trace back previous decisions and for agents to share data during collaborative process. One important contribution is the integration of the agent concept into WFM. Initially, agents are configured into a network model according to the dependency relationships between the work packages/activities. Such flows of control between agents are used to trigger the messages defined as flows of data between agents. It is through these messages that agents share their properties to collaborate. The separation of work from flow is a unique feature of our proposed agent-based WFM framework in contrast with most multi-agent systems. One of the most significant advantages of separation is that agents can be defined for specific remote services on the Web but independent of specific projects. Same agents may be reused in the workflow of different projects without any changes. It is necessary to define only the flows between them. Having highlighted its major advantages, our proposed framework has its own limitations. At this moment, agents are used to define work packages that may be further decomposed into lower-level tasks and activities. These would form internal workflow within individual remote services. Such intra-agent workflow is not considered at present. Instead, only inter-agent workflow is included. Another major issue is dependencies between agents, i.e. flows of control and data. There are static dependencies specifying predecessors and successors, and there are dependencies that are dynamically generated during the course of decision-making. At present, only predefined static dependencies are included and dynamic dependencies may be investigated as follow-up activities of this project in the future. Future work would focus on developing an initial prototype system that fully demonstrates the ideas. Implementation considerations have been taken when proposing the methodological framework. Most of the ideas are in fact based on our past experience in developing Web-based applications in CPD. In the medium terms, illustrative case studies must be implemented to demonstrate the working process. Strengths and weaknesses would be identified for further refinement of the methodology and the system. In the longer terms, investigations should be carried out into the possibilities of extending the agent model into a general-purpose client development environment.