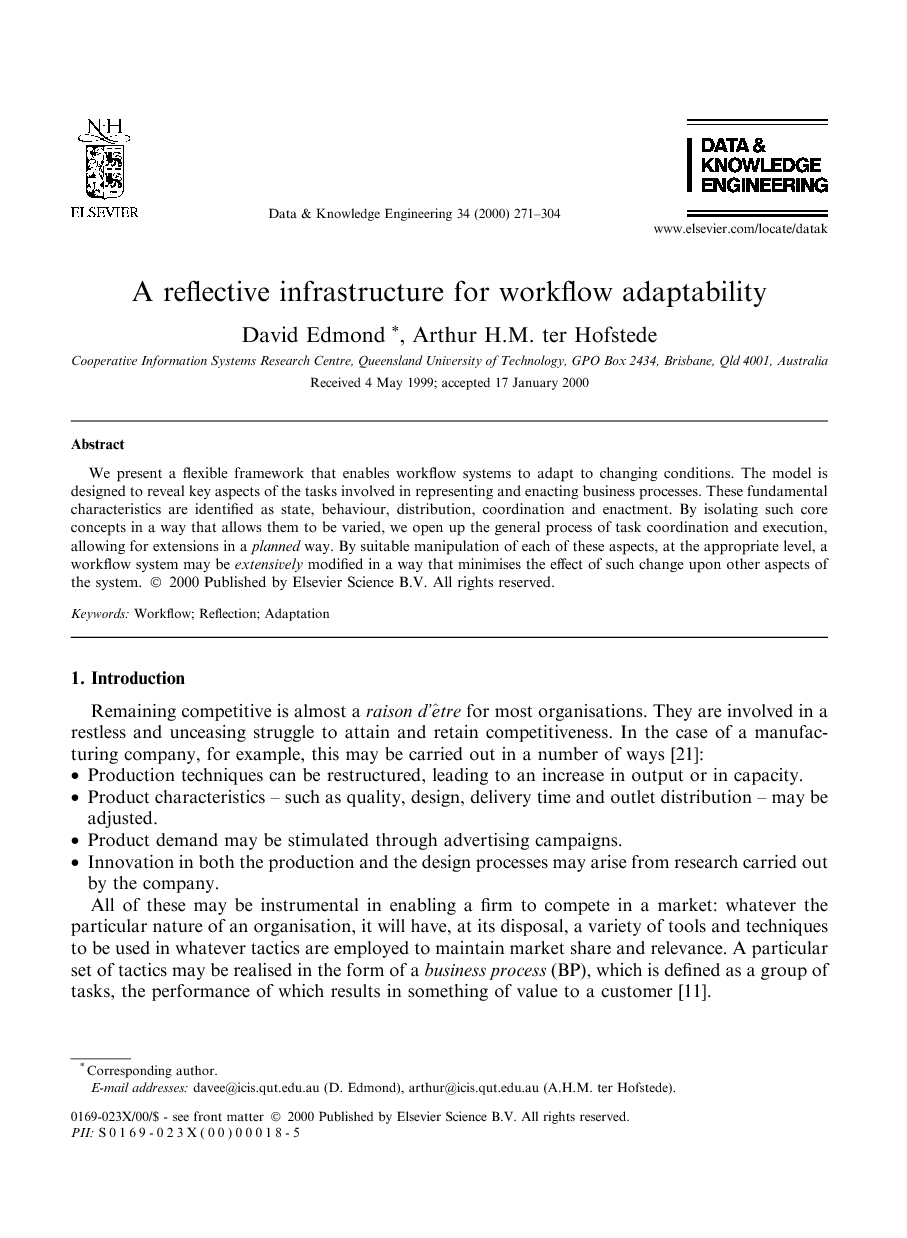 We present a flexible framework that enables workflow systems to adapt to changing conditions. The model is designed to reveal key aspects of the tasks involved in representing and enacting business processes. These fundamental characteristics are identified as state, behaviour, distribution, coordination and enactment. By isolating such core concepts in a way that allows them to be varied, we open up the general process of task coordination and execution, allowing for extensions in a planned way. By suitable manipulation of each of these aspects, at the appropriate level, a workflow system may be extensively modified in a way that minimises the effect of such change upon other aspects of the system.

In this article, we have discussed the View the MathML source model and how, through its reflective capabilities, a flexible infrastructure for workflow systems may be achieved. The philosophy of the model follows the observation that, essentially, there are two applications of reflection: representing the functionality of a system, and representing its implementation. Hence we might expect two basic categories of metaobject [10]. • There will be ones that contribute towards the specification of an object and which provide a declarative description of an object and its behaviour. • There will be ones that describe aspects of the implementation of an object. Using this prescription, the five metaobjects that form the heart of the model – state, behaviour, location, coordination and enactment – capture domain and operational knowledge, as well as allowing task-oriented activities to be monitored. Isolating key facets, in such a way that they may be inspected and adjusted, opens up the process of task coordination and specification, and enables extensions in an open and clearly-specified way. Metaobject protocols provide a means of expressing the execution semantics of objects: a reflective object protocol for workflow systems offers a flexible framework for providing structured descriptions and coordinated execution of the tasks involved. Through such protocols, the View the MathML source model provides: • A metalevel architecture for workflow systems that allows an appropriate abstraction of evolution in workflow systems. • A set of possible rules for governing the evolution of a workflow specification. • An approach to the control of the process of evolution itself. • A set of rules governing the enactment of a workflow instance. • A set of rules governing the evolution of an instance, in the light of changes to its schema. Together, these features allow the rigorous evolution of accurate and reliable workflow systems, and hence, of the corresponding business processes. The advantages that we perceive in our approach are: that the model is built upon a small number of well-established concepts; that merely by repeated application of these few ideas, key aspects of a workflow system may be addressed; and that by enabling the modification of these key areas, extensive workflow adaptability is achieved. Furthermore, because the model is founded upon familiar formalisms, and these formalisms may be applied at many different levels, a deeper understanding of workflow systems can be achieved.