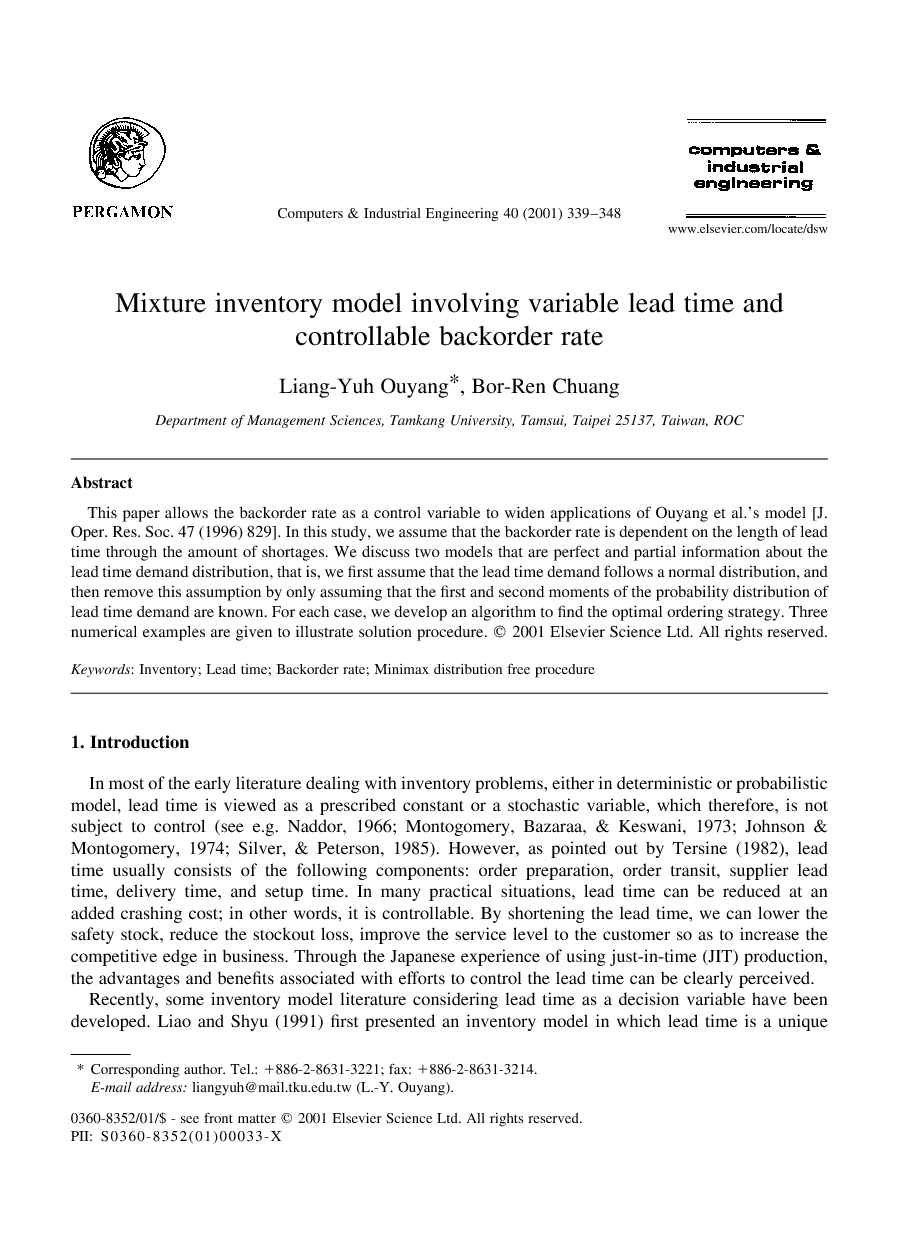 This paper allows the backorder rate as a control variable to widen applications of Ouyang et al.'s model [J. Oper. Res. Soc. 47 (1996) 829]. In this study, we assume that the backorder rate is dependent on the length of lead time through the amount of shortages. We discuss two models that are perfect and partial information about the lead time demand distribution, that is, we first assume that the lead time demand follows a normal distribution, and then remove this assumption by only assuming that the first and second moments of the probability distribution of lead time demand are known. For each case, we develop an algorithm to find the optimal ordering strategy. Three numerical examples are given to illustrate solution procedure.

In most of the early literature dealing with inventory problems, either in deterministic or probabilistic model, lead time is viewed as a prescribed constant or a stochastic variable, which therefore, is not subject to control (see e.g. Naddor, 1966, Montgomery et al., 1973, Johnson and Montgomery, 1974 and Silver and Peterson, 1985). However, as pointed out by Tersine (1982), lead time usually consists of the following components: order preparation, order transit, supplier lead time, delivery time, and setup time. In many practical situations, lead time can be reduced at an added crashing cost; in other words, it is controllable. By shortening the lead time, we can lower the safety stock, reduce the stockout loss, improve the service level to the customer so as to increase the competitive edge in business. Through the Japanese experience of using just-in-time (JIT) production, the advantages and benefits associated with efforts to control the lead time can be clearly perceived. Recently, some inventory model literature considering lead time as a decision variable have been developed. Liao and Shyu (1991) first presented an inventory model in which lead time is a unique decision variable and the order quantity is predetermined. Later, Ben-Daya and Raouf (1994) extended Liao and Shyu's (1991) model by allowing both the lead time and the order quantity as decision variables. In a recent paper, Ouyang et al. (1996) considered an inventory model with a mixture of backorders and lost sales to generalize Ben-Daya and Raouf's (1994) model, where the backorder rate is fixed. In this study, we seek to extend Ouyang et al.'s (1996) model, and propose more general model that allow the backorder rate as a control variable. Under most market behaviors, we can often observe that many products of famous brands or fashionable commodities such as certain brand gum shoes, hi-fi equipment, and clothes may lead to a situation in which customers prefer their demands to be backordered while shortages occur. Certainly, if the quantity of shortages is accumulated to a degree that exceeds the waiting patience of customers, some may refuse the backorder case. This phenomenon reveals that, as shortages occur, the longer the length of lead time is, the larger the amount of shortages is, the smaller the proportion of customers can wait, and hence the smaller the backorder rate would be. Under the situation, for a vendor, how to control an appropriate length of lead time to determine a target value of backorder rate so as to minimize the inventory relevant cost and increase the competitive edge in business is worth discussing. Consequently, we here assume that the backorder rate is dependent on the length of lead time through the amount of shortages. In this paper, we start with a lead time demand that follows a normal distribution, and try to determine the optimal ordering policy. We next relax this assumption by only assuming that the first and second moments of the probability distribution of the lead time demand to be known and finite, and then solve this inventory model by using the minimax distribution free approach. This paper is organized as follows. In the Section 2, the model that the lead time demand has perfect information is formulated. And the model of partial information for the lead time demand is examined in Section 3. Three numerical examples are provided to illustrate solution procedure in Section 4, and Section 5 contains some concluding remarks and future research.

The purpose of this study is to present a mixture (Q,L) inventory model involving variable lead time and controllable backorder rate to extend that of Ouyang et al. (1996). In the real market as unsatisfied demands occur, the longer the length of lead time is, the smaller the proportion of backorder would be. Considering the reason, we assume that the backorder rate is dependent on the length of lead time through the amount of shortages. We first assume that the lead time demand follows a normal distribution, and then relax the assumption about probability distributional form of the lead time demand and apply the minimax distribution free procedure to solve the problem. In future research on this problem, it would be of interest to treat the reorder point as a decision variable.