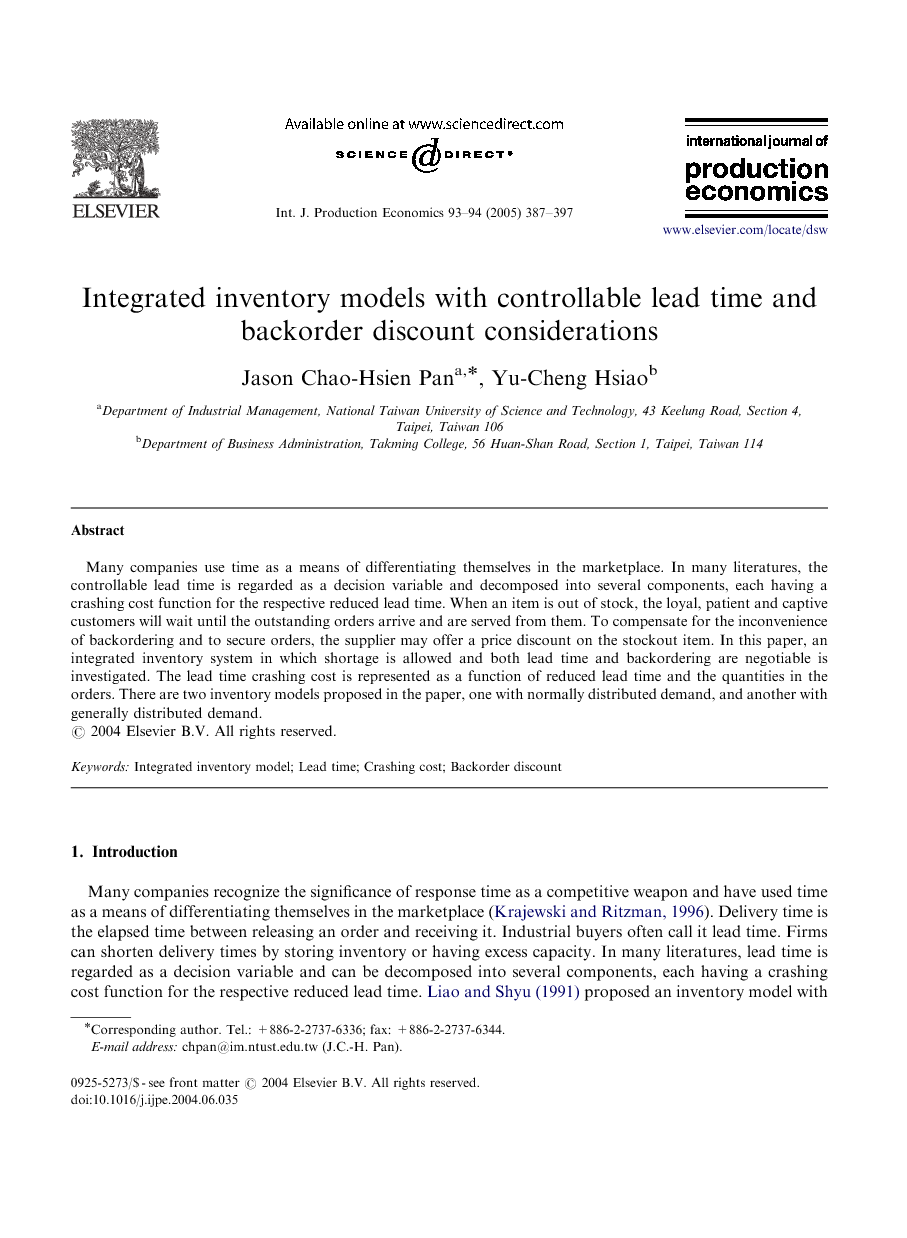 Many companies use time as a means of differentiating themselves in the marketplace. In many literatures, the controllable lead time is regarded as a decision variable and decomposed into several components, each having a crashing cost function for the respective reduced lead time. When an item is out of stock, the loyal, patient and captive customers will wait until the outstanding orders arrive and are served from them. To compensate for the inconvenience of backordering and to secure orders, the supplier may offer a price discount on the stockout item. In this paper, an integrated inventory system in which shortage is allowed and both lead time and backordering are negotiable is investigated. The lead time crashing cost is represented as a function of reduced lead time and the quantities in the orders. There are two inventory models proposed in the paper, one with normally distributed demand, and another with generally distributed demand.

Many companies recognize the significance of response time as a competitive weapon and have used time as a means of differentiating themselves in the marketplace (Krajewski and Ritzman, 1996). Delivery time is the elapsed time between releasing an order and receiving it. Industrial buyers often call it lead time. Firms can shorten delivery times by storing inventory or having excess capacity. In many literatures, lead time is regarded as a decision variable and can be decomposed into several components, each having a crashing cost function for the respective reduced lead time. Liao and Shyu (1991) proposed an inventory model with predetermined order quantity and normally distributed demand with lead time being the variable to minimize the expected total cost. Ben–Daya and Raouf (1994) presented more general models by including both lead time and order quantity as decision variables. Based on Ben-Daya and Raouf model (1994), Ouyang et al. (1996) took the item shortage issue into consideration and treated the total stockout to be a mixture of backorders and lost sales. Ouyang and Wu (1998) assumed the lead time demand to be any cumulative distribution with known and finite first and second moments, and developed a procedure to find the optimal lead time and the optimal order quantity for the problem. The lead time reducing cost is generally regarded as a function of the number of orders only (Liao and Shyu, 1991; Ben-Daya and Raouf, 1994; Ouyang et al., 1996; Ouyang and Wu, 1998); however, part of it may also depend upon the item quantities in the orders. Pan et al. (2001) proposed that the transportation cost, the overtime wages and extra inventory holding costs for expedition are all proportional to the item quantities rushed. Therefore, the crashing cost is made up of a fixed portion and a variable portion proportional to the quantity in the rushed order. A stockout occurs whenever insufficient stock exists to fulfill a replenishment order. During the stockout period, either all the demand is backordered, in which all customers wait until their demand is satisfied; or all the demand is lost. However, in many real inventory systems, demand can be captive partially. For customers whose needs are not crucial at that time can wait for the item to be satisfied, while others who cannot wait will fill their demands from some other sources. The cost for a lost sale ranges form profit loss on the sale to some unspecifiable loss of good will. On the other hand, the backordering could result in handling cost, expediting cost, and frequently special shipping cost to reduce the lead time. In order to compensate customers for the inconvenience of waiting, the idleness of equipment, or even lost production during the stockout period, the supplier may offer a variable price discount on the stockout item depending on the seriousness of the backorder condition. Thus, both the backorder discount and the lead time appear to be negotiable in such a way that the supplier may cut down the present and future profit losses and the customers may be able to get the item as soon as possible to resume the production (Pan and Hsiao, 2001). This paper extends the work of Ouyang et al. (1996) by considering a continuous review inventory system in which shortage is allowed and the total amount of stockout is a combination of backorder and lost sale. It is assumed that the supplier may offer a backorder price discount to the patient customers with outstanding orders during the shortage period to secure customer orders. Furthermore, it is assumed that the inventory lead time can be reduced and the crashing cost is represented as a function of reduced lead time and the quantities in the orders. There are two inventory models discussed in the paper, one with normally distributed demand, and another with generally distributed demand.

Time-based competition focuses on the reduction of overall system response time and inventory lead time reduction has been one of the favorite topics for both researchers and practitioners. Under probabilistic demand, inventory shortage is unavoidable. In order to make up for the inconvenience and even the losses of royal and patient customers, the supplier may offer a backorder price discount to secure orders during the shortage period. This paper extends the work of Ouyang et al. (1996) by proposing that both the lead time and the backorder price discount to be negotiable and the lead time crashing cost to be represented as a function of both the order quantity and the reduced lead time.