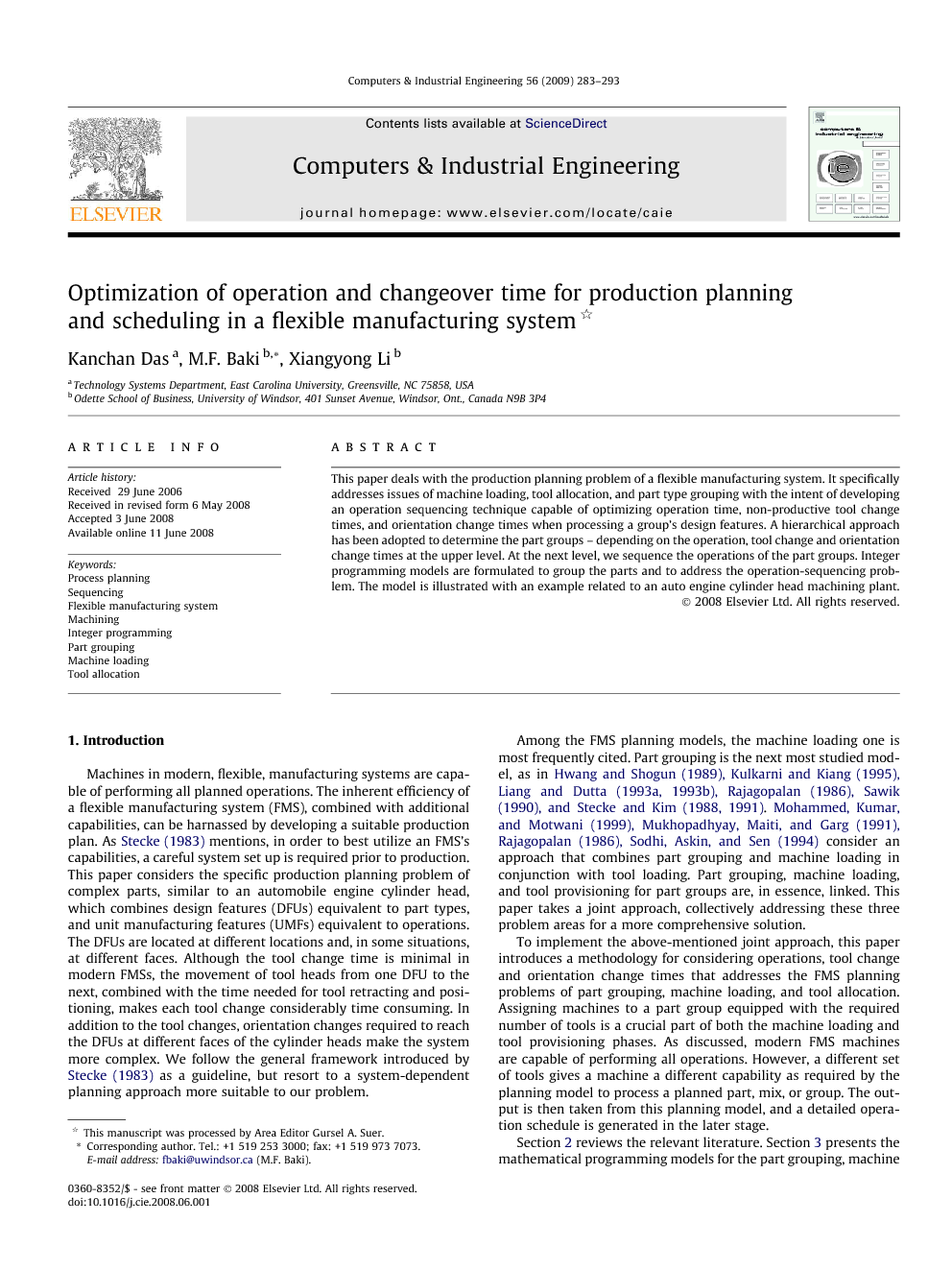 This paper deals with the production planning problem of a flexible manufacturing system. It specifically addresses issues of machine loading, tool allocation, and part type grouping with the intent of developing an operation sequencing technique capable of optimizing operation time, non-productive tool change times, and orientation change times when processing a group’s design features. A hierarchical approach has been adopted to determine the part groups – depending on the operation, tool change and orientation change times at the upper level. At the next level, we sequence the operations of the part groups. Integer programming models are formulated to group the parts and to address the operation-sequencing problem. The model is illustrated with an example related to an auto engine cylinder head machining plant.

Machines in modern, flexible, manufacturing systems are capable of performing all planned operations. The inherent efficiency of a flexible manufacturing system (FMS), combined with additional capabilities, can be harnassed by developing a suitable production plan. As Stecke (1983) mentions, in order to best utilize an FMS’s capabilities, a careful system set up is required prior to production. This paper considers the specific production planning problem of complex parts, similar to an automobile engine cylinder head, which combines design features (DFUs) equivalent to part types, and unit manufacturing features (UMFs) equivalent to operations. The DFUs are located at different locations and, in some situations, at different faces. Although the tool change time is minimal in modern FMSs, the movement of tool heads from one DFU to the next, combined with the time needed for tool retracting and positioning, makes each tool change considerably time consuming. In addition to the tool changes, orientation changes required to reach the DFUs at different faces of the cylinder heads make the system more complex. We follow the general framework introduced by Stecke (1983) as a guideline, but resort to a system-dependent planning approach more suitable to our problem. Among the FMS planning models, the machine loading one is most frequently cited. Part grouping is the next most studied model, as in Hwang and Shogun, 1989, Kulkarni and Kiang, 1995, Liang and Dutta, 1993a, Liang and Dutta, 1993b, Rajagopalan, 1986, Sawik, 1990, Stecke and Kim, 1988 and Stecke and Kim, 1991. Mohammed et al., 1999, Mukhopadhyay et al., 1991, Rajagopalan, 1986 and Sodhi et al., 1994 consider an approach that combines part grouping and machine loading in conjunction with tool loading. Part grouping, machine loading, and tool provisioning for part groups are, in essence, linked. This paper takes a joint approach, collectively addressing these three problem areas for a more comprehensive solution. To implement the above-mentioned joint approach, this paper introduces a methodology for considering operations, tool change and orientation change times that addresses the FMS planning problems of part grouping, machine loading, and tool allocation. Assigning machines to a part group equipped with the required number of tools is a crucial part of both the machine loading and tool provisioning phases. As discussed, modern FMS machines are capable of performing all operations. However, a different set of tools gives a machine a different capability as required by the planning model to process a planned part, mix, or group. The output is then taken from this planning model, and a detailed operation schedule is generated in the later stage. Section 2 reviews the relevant literature. Section 3 presents the mathematical programming models for the part grouping, machine loading, tool allocation, and scheduling, and Section 4 provides examples that illustrate the planning and scheduling model. Conclusions are given in Section 5.

Our model introduces a new approach to part grouping, tool allocation, and machine loading components for FMS planning problems – providing a way to optimize the tool change and orientation change times. Our approach will improve the overall performance of user organization by reducing non-productive times, such as the time taken to make tool and orientation changes. This study solves FMS planning problems at higher levels and determines the optimal sequencing of UMFs for each group in the second level. Where only a limited number of UMFs (as partitioned by the part grouping model) are involved in the sequencing part of the model, the computational effort required for the operational level (sequencing problem) problem is also significantly reduced. A numerical example is provided to demonstrate the applicability of the proposed planning and sequencing models. This model may be considered computationally feasible and may be solved for problem sizes similar to the example by commercially available solvers, like LINGO 9.0. Our research acknowledges that not experimenting with real, industrial-sized problems creates limitations and, as such, further exploration in this respect may be considered for future study.