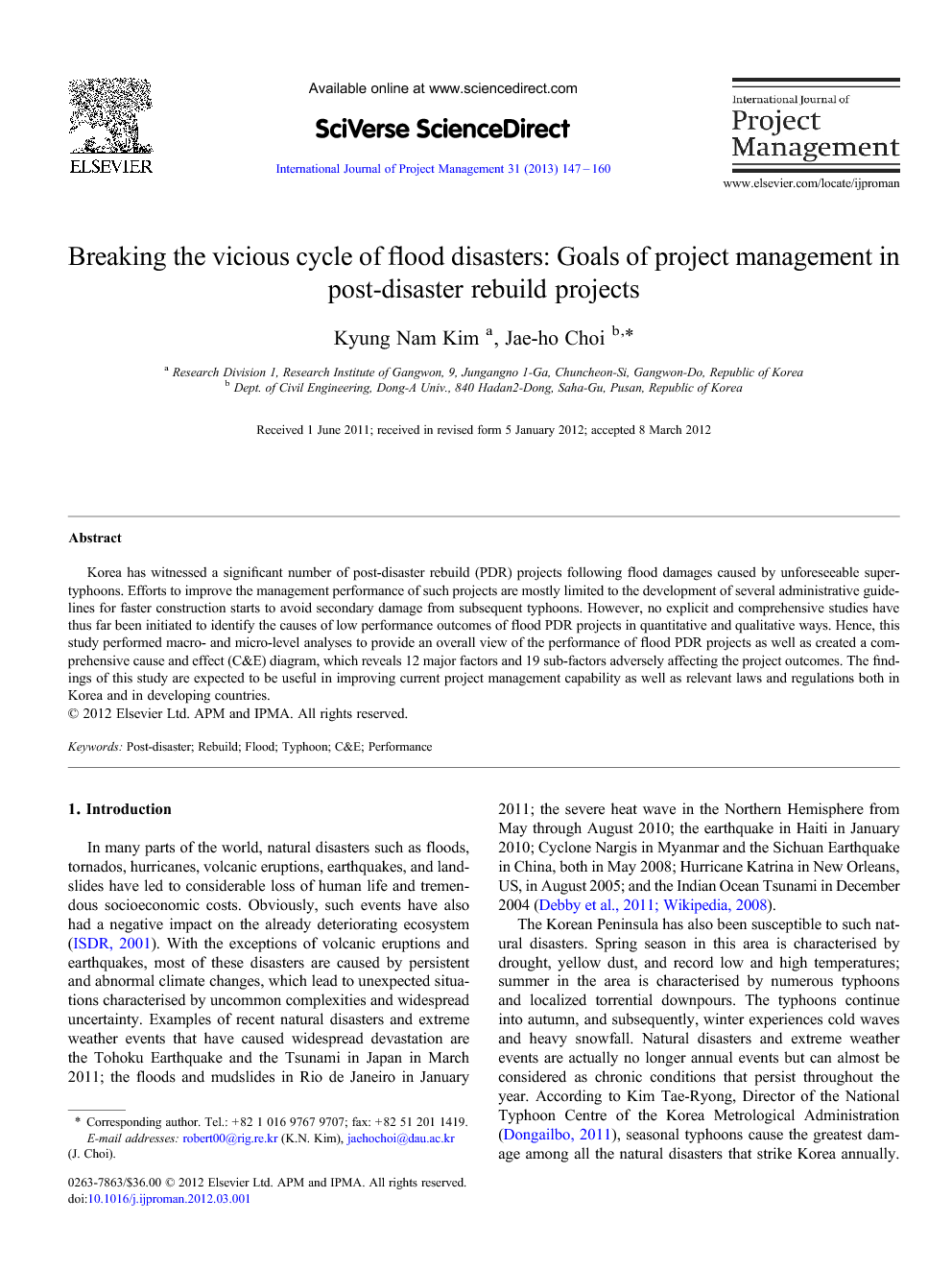 Korea has witnessed a significant number of post-disaster rebuild (PDR) projects following flood damages caused by unforeseeable super-typhoons. Efforts to improve the management performance of such projects are mostly limited to the development of several administrative guidelines for faster construction starts to avoid secondary damage from subsequent typhoons. However, no explicit and comprehensive studies have thus far been initiated to identify the causes of low performance outcomes of flood PDR projects in quantitative and qualitative ways. Hence, this study performed macro- and micro-level analyses to provide an overall view of the performance of flood PDR projects as well as created a comprehensive cause and effect (C&E) diagram, which reveals 12 major factors and 19 sub-factors adversely affecting the project outcomes. The findings of this study are expected to be useful in improving current project management capability as well as relevant laws and regulations both in Korea and in developing countries.

In Korea, efforts to improve the efficiency of flood PDR projects are so far limited mostly to the development of a series of administrative guidelines for faster construction starts and regulatory requirements to ensure transparent utilization of budget. No explicit and comprehensive studies have been conducted to identify the causes of low management performance of flood PDR projects in quantitative and qualitative ways. The macro- and micro-level analyses in this study show that the current disaster prevention system in Korea falls short of meeting the objectives of flood PDR projects: preventative, permanent, and eco-friendly design and construction within the given cost and schedule constraints. The quantitative analyses (i.e. the macro and micro-level analyses) based on the selected PDR projects, all of which were launched after the torrential typhoon Rusa in 2002, provide information that needs to be investigated further in order to improve the current management performance of flood PDR projects. In addition, the qualitative analysis by means of interviews and questionnaire surveys administered to chief project officers and external technical project engineers who directly participated in the selected projects revealed 12 major factors and 19 sub-factors adversely affecting project outcomes according to the project life cycle. The C&E diagram was used to describe these factors and sub-factors. The diagram clarifies important challenges faced by and roles of the project management team that should be taken into account for improving current unsatisfactory outcomes of flood PDR projects. A key finding of the C&E diagram is that the primary goal of project management should be to break the identified vicious cycle in flood PDR projects. The individual elements that constitute the vicious cycle (i.e. long lead time before design contracting, absence of supporting laws that permit design contracting before budget allocation, lengthy design time, large delay in design submission, lengthy and varied design review time, late issuance of project tenders, delay in construction start, secondary damage from subsequent typhoon, and inclusion of the non-working period of the following year's winter season in the calculation) should be managed and controlled with a priority for effective PDR project execution, as they are highly related to the time aspect of the project, which is normally acknowledged to be more important than other performance criteria in PDR projects. However, this study insists that in a typical contractual structure of a PDR project—which includes the components of a responsible government, construction supervision companies, local small engineering firms and contractors, and the central government's financial and administrative supports, project outcomes may not be as effective as that when using third-party construction management or involving external technical project experts from the PDR planning phase immediately after disaster strikes. Local municipalities susceptible to disaster damage need to reassess their project management capability in order to be able to achieve their goal of disaster prevention and should consider acquiring required functional support of external technical experts in a selective way to mitigate the inevitable effects of natural disasters. The authors also suggest that in order to meet the objectives of a PDR project a project manager may take modularity and mass customization perspectives as there is a close relationship between the types of catastrophes and projects. The standardized design and construction method can be a key driver behind adopting modularity concept in a PDR project in which many similar types of sub-projects are existing. This study has found that two critical future researches aiming to meet the objectives of a PDR project should be focused on how to increase the standardized design and construction works according to the increased importance of industry consensus standardized restoration illustrated by Rapp (2011), and how to design and incorporate the integrated project information retrieval and sharing system into entire processes over the life cycle of the PDR project with the technical and administrative support from private engineering and construction engineers (Wilkinson et al., 2006). The BIM (Building Information Modelling) technology can be regarded as a practical tool for realizing modularity concept in a very large and complex PDR project. The BIM technology can be extended and linked to the automated cost estimation and generation of standardized drawings for effective PDR project planning and designing, thereby reducing time delay and uncertainty problems in a PDR project. The current weak technological linkage is placed on how to effectively use the images of damaged structures acquired from laser-scanning or stereo visioning systems for developing a BIM model. The sharing and propagation of successful PDR projects that took advantage of the standardized project planning and design methods is also recommended. The provision of technical engineers with expertise on the use of BIM and analysis of geospatial data in each municipality is the organizational pattern shift required for rapid and preventative disasters recovery in the changing world weather.