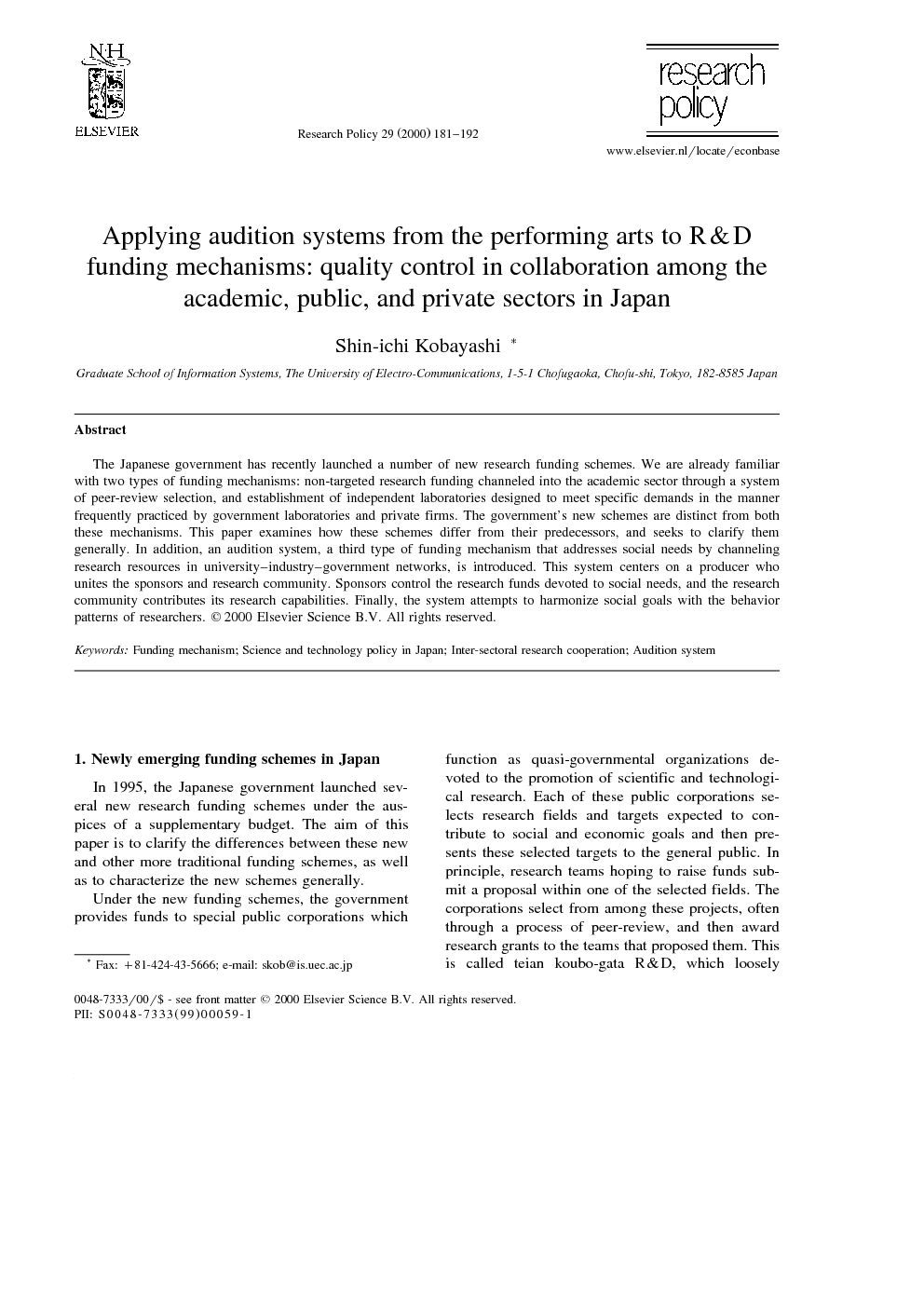 The Japanese government has recently launched a number of new research funding schemes. We are already familiar with two types of funding mechanisms: non-targeted research funding channeled into the academic sector through a system of peer-review selection, and establishment of independent laboratories designed to meet specific demands in the manner frequently practiced by government laboratories and private firms. The government's new schemes are distinct from both these mechanisms. This paper examines how these schemes differ from their predecessors, and seeks to clarify them generally. In addition, an audition system, a third type of funding mechanism that addresses social needs by channeling research resources in university–industry–government networks, is introduced. This system centers on a producer who unites the sponsors and research community. Sponsors control the research funds devoted to social needs, and the research community contributes its research capabilities. Finally, the system attempts to harmonize social goals with the behavior patterns of researchers.

In 1995, the Japanese government launched several new research funding schemes under the auspices of a supplementary budget. The aim of this paper is to clarify the differences between these new and other more traditional funding schemes, as well as to characterize the new schemes generally. Under the new funding schemes, the government provides funds to special public corporations which function as quasi-governmental organizations devoted to the promotion of scientific and technological research. Each of these public corporations selects research fields and targets expected to contribute to social and economic goals and then presents these selected targets to the general public. In principle, research teams hoping to raise funds submit a proposal within one of the selected fields. The corporations select from among these projects, often through a process of peer-review, and then award research grants to the teams that proposed them. This is called teian koubo-gata R&D, which loosely translates to R&D that invites public proposals and participation. Other factors affecting current funding schemes are the Science and Technology Basic Law enacted in 1995 (STA, 1995), and the Science and Technology Basic Plan formulated by the government based on the Law in 1996 (STA, 1996). Under both the Law and the Plan, the Japanese government shifted R&D priorities towards projects focusing on social and economic contributions. The teian koubo-gata R&D funding schemes are now viewed as measures to cope with these new policy ends. Under the new schemes, the government does not organize its own R&D, but utilizes existing research potential in sectors where the government remains solely in charge of the sponsors. The research teams are usually inter-sectoral ones whose researchers come from universities, private firms, and public laboratories. These types of funding schemes are becoming increasingly common. Currently, seven ministries and agencies have funding programs of this type. In only 3 years, the budget for these programs has grown to over ¥500 billion, or almost one-half of the amount dispersed through the Grant-in-Aid program, the principal source of funding to academic research activities. For a clearer understanding of these new schemes, let us examine some typical cases. The following is a brief introduction of some of the programs implemented by the Japan Science and Technology Corporation (JST) and the Japan Society for the Promotion of Science (JSPS).

This paper has turned its attention to funding mechanisms and characterized the audition system as a method of tying together social R&D needs and research resources. The audition system centers on the producer, who ties together the sponsors who control the research funds directly and indirectly required to respond to social and economic needs, and the existing research community, which has the capability to implement research. At the stage when funds are raised and researchers from various sectors are selected for participation, the sponsor and research candidates carry out an ex ante evaluation of the research proposal. At the same time, the producer decides on the composition of the research group to be entrusted with the success of the performance. This mechanism is also a means of harmonization between the different behavior patterns of researchers and research organizations in the academic, public and private sectors, and social and economic goals. Several new funding mechanisms which utilize, although unintentionally, the mechanisms described above have recently appeared in Japan. In the teian koubo-gata research funding program, the producer and researchers usually belong to the same community. In JSPS's Research for the Future Program, the producer is from the same community as the researchers, but his or her role is similar to that of a funding agency. In contrast, perhaps the most important aspect of the audition system, in terms of meeting the needs of citizens, is its emphasis on so-called community-based research (Sclove, 1995). It should be noted, of course, that the audition system described here is an abstract concept and varies in many respects from these new funding mechanisms as actually practiced. It would be useful to examine the relationship between the audition system and similar schemes in the US or Europe. For example, mechanisms similar to those described here were adopted by the Industry/University Cooperative Research Centers Program founded in the 1970s by the National Science Foundation of the USA (Hetzner et al., 1989). And the procedures applied to organize new research units of the Centre National de la Recherche Scientifique (CNRS) in France would seem to have characteristics in common with the audition system, although these research units tend to focus on more academic activities. Particularly in the case of the mixed research units, in which CNRS realizes collaborations with other research institutes, comparison to the audition system seems apt. And what of the funding mechanisms adopted by the British research councils? Although the scope of the present paper does not allow for a detailed comparison in these cases, the models presented here should be widely applicable to the study of funding schemes worldwide, and it is hoped that they will be applied to future research. The popularity of Mode 2 research activities can be expected to increase in conjunction with the growing social demands being placed on R&D, the increasing financial restrictions in government budgets, and the maturation of science bases worldwide. The audition system can also be expected to grow in importance. But it is crucial that these three different R&D configurations be applied appropriately. This is especially true in the public sector, which must decide between two distinct policies, i.e., to pursue its own R&D activities, which are public in nature and cannot be entrusted to the market mechanism, or to configure R&D activities through the use of an existing research base. Equally important, we must recognize that the audition system is supported by twin research bases, the peer-review system and the in-house research system. The government must therefore provide guidelines for realizing smooth and efficient R&D configurations based on the audition system by developing a system that enables collaboration among diverse organizations, such as an information network and deregulation of systems that provides access to existing resources in the academic, public, and private sectors. Universities should positively participate in R&D configurations based on the audition system to accomplish social and economic goals in alignment with academic autonomy. However, it should be noted that we still lack sufficient experience with this type of funding mechanism. Henceforth, we should investigate the performance of the mechanism, improvements necessary to boost the performance, and so on. Also, with investigating real cases, we should discuss which areas, types, scales and scopes of different kinds of research activities are more suitable for the audition system.