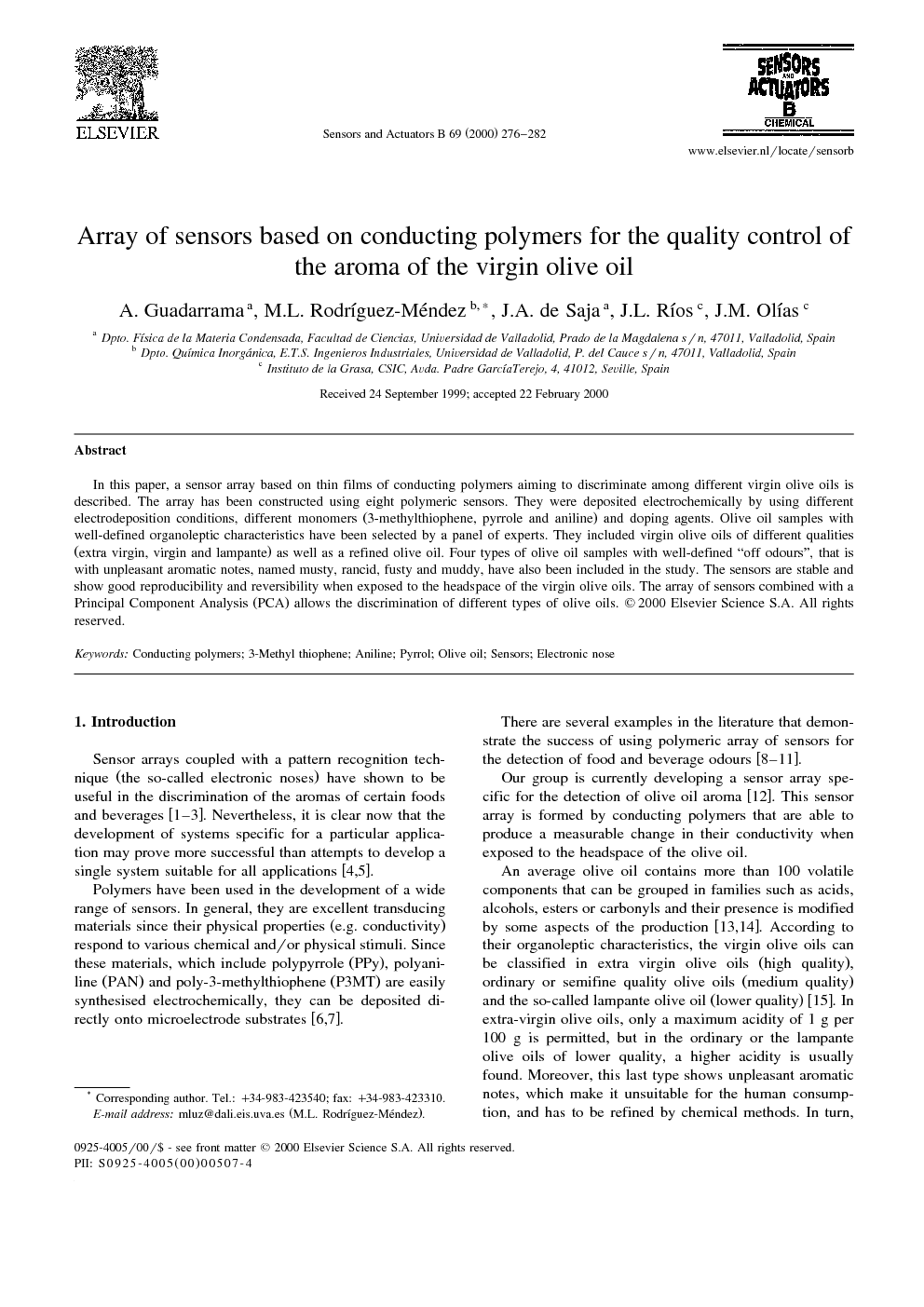 In this paper, a sensor array based on thin films of conducting polymers aiming to discriminate among different virgin olive oils is described. The array has been constructed using eight polymeric sensors. They were deposited electrochemically by using different electrodeposition conditions, different monomers (3-methylthiophene, pyrrole and aniline) and doping agents. Olive oil samples with well-defined organoleptic characteristics have been selected by a panel of experts. They included virgin olive oils of different qualities (extra virgin, virgin and lampante) as well as a refined olive oil. Four types of olive oil samples with well-defined “off odours”, that is with unpleasant aromatic notes, named musty, rancid, fusty and muddy, have also been included in the study. The sensors are stable and show good reproducibility and reversibility when exposed to the headspace of the virgin olive oils. The array of sensors combined with a Principal Component Analysis (PCA) allows the discrimination of different types of olive oils.

Sensor arrays coupled with a pattern recognition technique (the so-called electronic noses) have shown to be useful in the discrimination of the aromas of certain foods and beverages [1], [2] and [3]. Nevertheless, it is clear now that the development of systems specific for a particular application may prove more successful than attempts to develop a single system suitable for all applications [4] and [5]. Polymers have been used in the development of a wide range of sensors. In general, they are excellent transducing materials since their physical properties (e.g. conductivity) respond to various chemical and/or physical stimuli. Since these materials, which include polypyrrole (PPy), polyaniline (PAN) and poly-3-methylthiophene (P3MT) are easily synthesised electrochemically, they can be deposited directly onto microelectrode substrates [6] and [7]. There are several examples in the literature that demonstrate the success of using polymeric array of sensors for the detection of food and beverage odours [8], [9], [10] and [11]. Our group is currently developing a sensor array specific for the detection of olive oil aroma [12]. This sensor array is formed by conducting polymers that are able to produce a measurable change in their conductivity when exposed to the headspace of the olive oil. An average olive oil contains more than 100 volatile components that can be grouped in families such as acids, alcohols, esters or carbonyls and their presence is modified by some aspects of the production [13] and [14]. According to their organoleptic characteristics, the virgin olive oils can be classified in extra virgin olive oils (high quality), ordinary or semifine quality olive oils (medium quality) and the so-called lampante olive oil (lower quality) [15]. In extra-virgin olive oils, only a maximum acidity of 1 g per 100 g is permitted, but in the ordinary or the lampante olive oils of lower quality, a higher acidity is usually found. Moreover, this last type shows unpleasant aromatic notes, which make it unsuitable for the human consumption, and has to be refined by chemical methods. In turn, the unpleasant notes can be classified as “fusty”, “muddy”, “musty”, “rancid” and “winey”, following the classification of the International Olive Oil Council [16]. One of the main problems when testing or training such an array of sensors is the need to have available well characterised samples. This implies a degree of difficulty since the samples have to be carefully selected and evaluated by a panel test. Moreover, once selected, the samples must be stored under strict conditions (i.e. avoiding the light) since an inappropriate storage may modify the organoleptic characteristics of the sample under study. With conducting polymer-coated microelectrode sensors, a number of electrochemical options are available which allow the rapid and simple modification of the response of the sensors. In this work, a series of sensors based on PPy, PAN and P3MT have been prepared using different experimental conditions. The response of individual sensors towards a selection of volatile components (VOCs) present in the headspace of the olive oil has been evaluated. For this purpose, and in order to take into account the effects of the matrix in the odour release of individual chemical components, an odourless olive oil called “flat oil” has been used as a matrix where the selected VOCs were solved. An array has been constructed using sensors that showed a certain degree of selectivity towards the VOCs usually present in the headspace of the olive oil and that also presented good characteristics of stability, reproducibility and reversibility. The array has been exposed to the headspace of different classes of virgin olive oils with well-defined organoleptic characteristics (including “off” odours). In order to evaluate the capabilities of discrimination of the array of sensors, the Principal Component Analysis (PCA) has been conducted.

A sensor array based on thin films of conducting polymers focused on the detection of olive oil aroma has been described. The polymeric sensors under study exhibited different selectivity towards volatile components that are usually present in the olive oil headspace and which are responsible of the olive oil aroma. The responses were fast, reversible and repeatable. The array of sensors showed a degree of selectivity towards olive oils of different qualities. Moreover, the application of a pattern recognition technique allows the differentiation and the identification of olive oils with well-defined off odours. From these results, it can be concluded that the features obtained can be considered as a “fingerprint” of these types of oils. More work has to be done to extend the ability of the array in classifying defective olive oils and extra virgin olive oils simultaneously. The correct selection and characterisation of the samples is of key importance to perform a correct training of the array. The importance of the contribution of the experts in the field of the olive oils will never be emphasised enough.