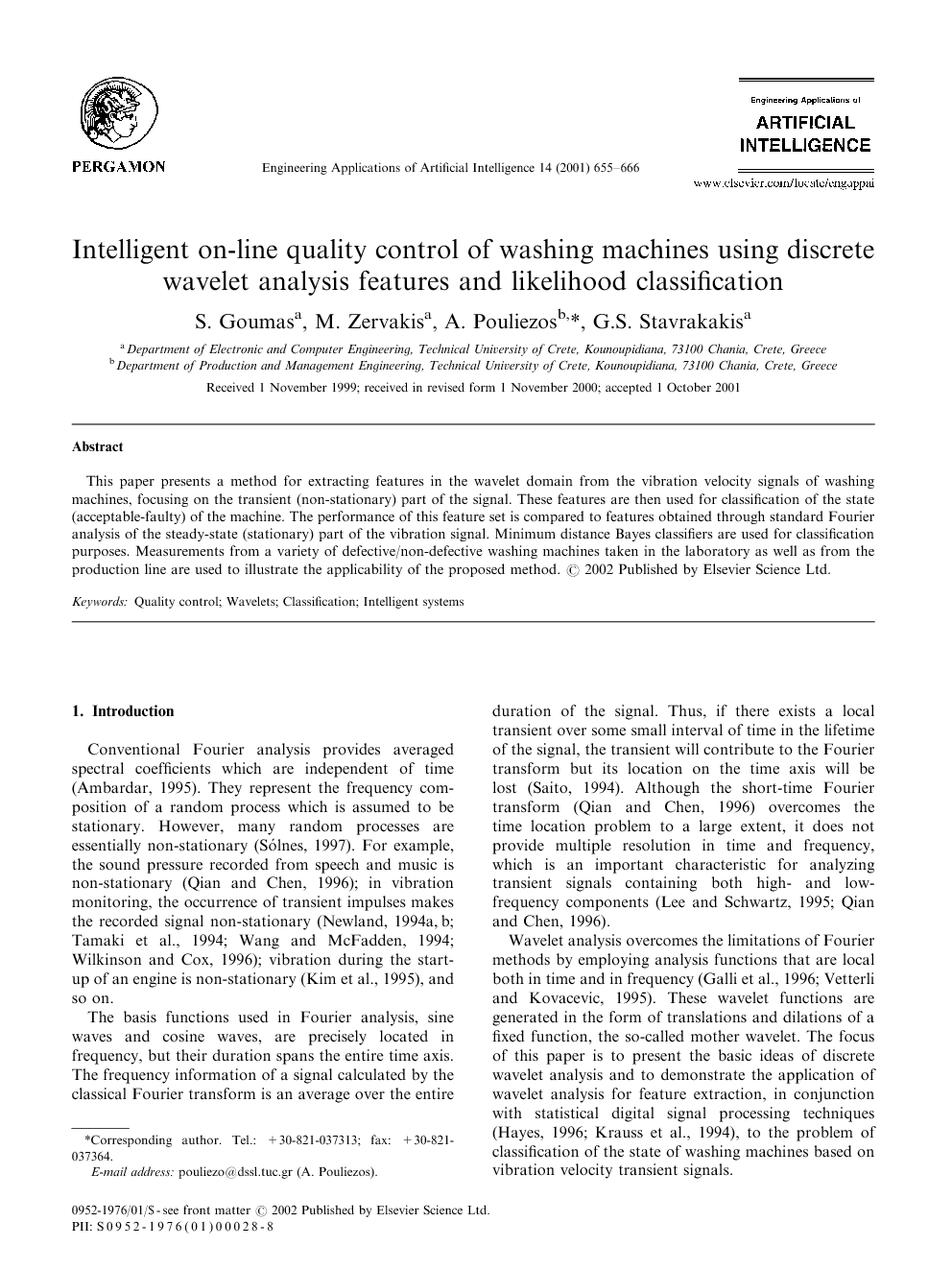 This paper presents a method for extracting features in the wavelet domain from the vibration velocity signals of washing machines, focusing on the transient (non-stationary) part of the signal. These features are then used for classification of the state (acceptable-faulty) of the machine. The performance of this feature set is compared to features obtained through standard Fourier analysis of the steady-state (stationary) part of the vibration signal. Minimum distance Bayes classifiers are used for classification purposes. Measurements from a variety of defective/non-defective washing machines taken in the laboratory as well as from the production line are used to illustrate the applicability of the proposed method.

Conventional Fourier analysis provides averaged spectral coefficients which are independent of time (Ambardar, 1995). They represent the frequency composition of a random process which is assumed to be stationary. However, many random processes are essentially non-stationary (Sólnes, 1997). For example, the sound pressure recorded from speech and music is non-stationary (Qian and Chen, 1996); in vibration monitoring, the occurrence of transient impulses makes the recorded signal non-stationary (Newland (1994a) and Newland (1994b); Tamaki et al., 1994; Wang and McFadden, 1994; Wilkinson and Cox, 1996); vibration during the start-up of an engine is non-stationary (Kim et al., 1995), and so on. The basis functions used in Fourier analysis, sine waves and cosine waves, are precisely located in frequency, but their duration spans the entire time axis. The frequency information of a signal calculated by the classical Fourier transform is an average over the entire duration of the signal. Thus, if there exists a local transient over some small interval of time in the lifetime of the signal, the transient will contribute to the Fourier transform but its location on the time axis will be lost (Saito, 1994). Although the short-time Fourier transform (Qian and Chen, 1996) overcomes the time location problem to a large extent, it does not provide multiple resolution in time and frequency, which is an important characteristic for analyzing transient signals containing both high- and low-frequency components (Lee and Schwartz, 1995; Qian and Chen, 1996). Wavelet analysis overcomes the limitations of Fourier methods by employing analysis functions that are local both in time and in frequency (Galli et al., 1996; Vetterli and Kovacevic, 1995). These wavelet functions are generated in the form of translations and dilations of a fixed function, the so-called mother wavelet. The focus of this paper is to present the basic ideas of discrete wavelet analysis and to demonstrate the application of wavelet analysis for feature extraction, in conjunction with statistical digital signal processing techniques (Hayes, 1996; Krauss et al., 1994), to the problem of classification of the state of washing machines based on vibration velocity transient signals.

In this paper it is investigated that the applicability of features extracted from wavelet coefficients in the problem of pattern recognition. These features can be used on their own or in conjunction with features extracted from the Fourier transform. The proposed method is tested on real data taken from a production line of washing machines. The aim is to classify produced machines according to their mechanical health state. Results show a promise in the use of wavelet-born features, but their performance is inferior to that of Fourier-based features. This could be due to the transient signal not carrying separation information or the inappropriateness of the proposed features. Further research will help in clarifying these issues.