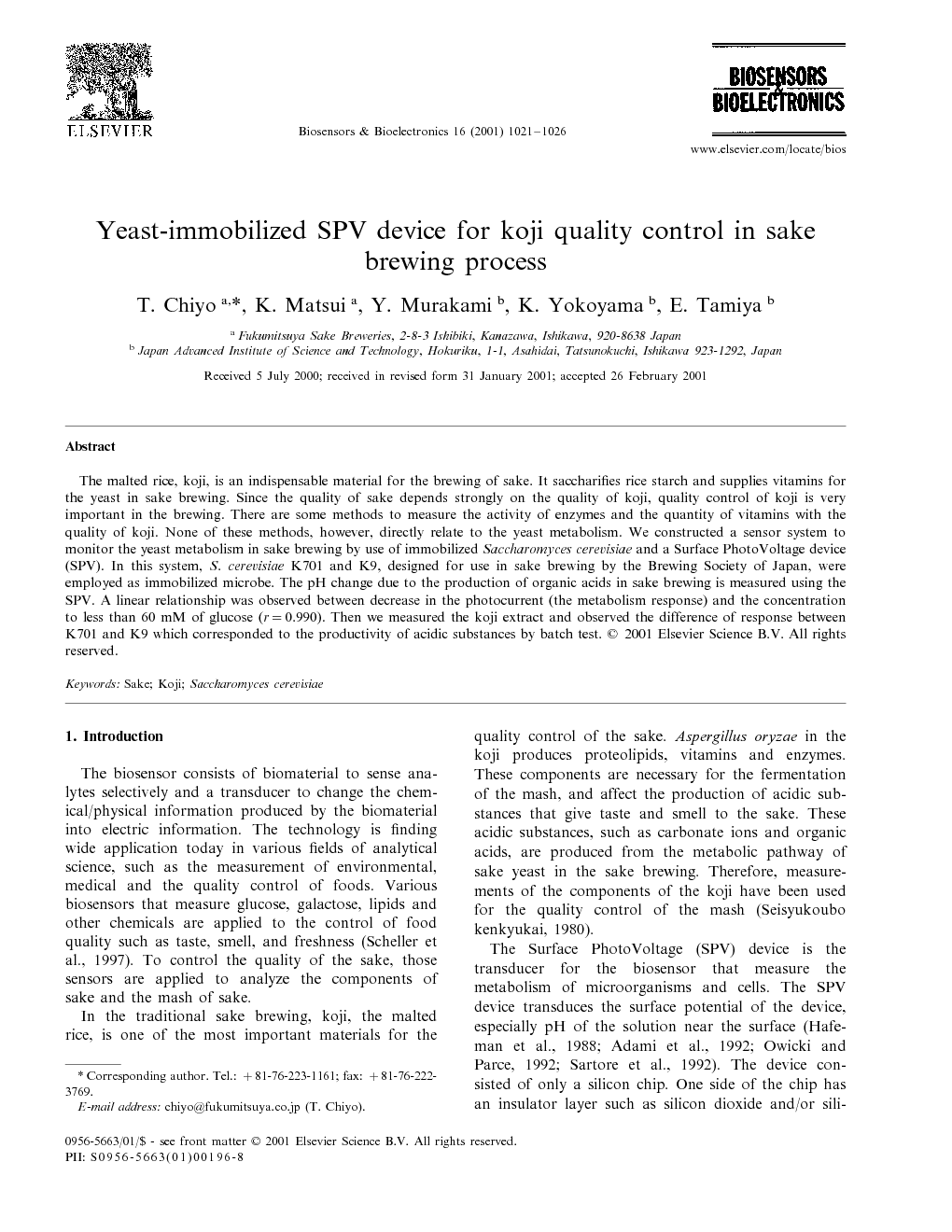 The malted rice, koji, is an indispensable material for the brewing of sake. It saccharifies rice starch and supplies vitamins for the yeast in sake brewing. Since the quality of sake depends strongly on the quality of koji, quality control of koji is very important in the brewing. There are some methods to measure the activity of enzymes and the quantity of vitamins with the quality of koji. None of these methods, however, directly relate to the yeast metabolism. We constructed a sensor system to monitor the yeast metabolism in sake brewing by use of immobilized Saccharomyces cerevisiae and a Surface PhotoVoltage device (SPV). In this system, S. cerevisiae K701 and K9, designed for use in sake brewing by the Brewing Society of Japan, were employed as immobilized microbe. The pH change due to the production of organic acids in sake brewing is measured using the SPV. A linear relationship was observed between decrease in the photocurrent (the metabolism response) and the concentration to less than 60 mM of glucose (r=0.990). Then we measured the koji extract and observed the difference of response between K701 and K9 which corresponded to the productivity of acidic substances by batch test.

The biosensor consists of biomaterial to sense analytes selectively and a transducer to change the chemical/physical information produced by the biomaterial into electric information. The technology is finding wide application today in various fields of analytical science, such as the measurement of environmental, medical and the quality control of foods. Various biosensors that measure glucose, galactose, lipids and other chemicals are applied to the control of food quality such as taste, smell, and freshness (Scheller et al., 1997). To control the quality of the sake, those sensors are applied to analyze the components of sake and the mash of sake. In the traditional sake brewing, koji, the malted rice, is one of the most important materials for the quality control of the sake. Aspergillus oryzae in the koji produces proteolipids, vitamins and enzymes. These components are necessary for the fermentation of the mash, and affect the production of acidic substances that give taste and smell to the sake. These acidic substances, such as carbonate ions and organic acids, are produced from the metabolic pathway of sake yeast in the sake brewing. Therefore, measurements of the components of the koji have been used for the quality control of the mash (Seisyukoubo kenkyukai, 1980). The Surface PhotoVoltage (SPV) device is the transducer for the biosensor that measure the metabolism of microorganisms and cells. The SPV device transduces the surface potential of the device, especially pH of the solution near the surface (Hafeman et al., 1988, Adami et al., 1992, Owicki and Parce, 1992 and Sartore et al., 1992). The device consisted of only a silicon chip. One side of the chip has an insulator layer such as silicon dioxide and/or silicon nitride as sensor side. The other side (back side) has a partially deposited metal layer for ohmic contact and the other part has no typical layer. Illumination of the backside of the SPV device induces photovoltage. When only sensor side of the SPV device is immersed in the analyte solution, and the potential of the solution is biased against the bulk silicon of the device using the ohmic contact, the silicon device acts as MIS (metal insulator semiconductor) structure. Since the depletion layer at the surface of the device has certain capacitance depending on the surface potential, the modulated photovoltage induces a photocurrent that depends on the sum of the bias potential and the surface potential of the device. Thus, modulated illumination induces modulated photovoltage and AC photocurrent. The SPV device has advantages against other pH sensors. For example, (1) the fabrication process is simple; (2) by multiplexing different light sources in different locations, the device can be multisensor without additional process complexity; and (3) encapsulation is easier and less critical. The SPV devices have been used in some research such as the chemical sensor to measure pH and ion concentrations, detection of bacterial growth, quantification of enzyme-linked immunoassays (Libby and Wada, 1989 and Briggs and Panfili, 1991), and measurement of metabolism of animal cell (Parce et al., 1989, Owicki et al., 1990, McConnell et al., 1992, Wada et al., 1993 and Chan et al., 1995). Thus, when the sake yeast is immobilized on the sensor side of the SPV device, the system is expected to sense the biological information of the koji extract solution for the quality control of the sake. In this research, we constructed the biosensor system that consists of the SPV device and yeast layer. The yeast for sake brewing was employed for this purpose. First, we confirmed that the sensor indicated the metabolism of the yeast by the change of the AC photocurrent. Second, the response of the sensor in the measurement of the koji extract was compared with the response of the glucose solution. This sensor system will not only give us the important information in the sake brewing processes, but can be applied for the quality control of other fermentation processes.

In this research, we employed the SPV method for the measurement of acidic substance, and combined it with a microbial membrane to construct a sensor system that estimate the quality of koji. This system responds to the production of acidic substances due to the metabolism of the sake yeast. However, the longer the measurement of the photocurrent takes, the more the response become unstable. Therefore, the sample solution was pumped into the flow cell for 5 min in order to get stable response. As a result, the response became stable, and the system indicated the linear relationship between the response and the glucose concentration from 10 to 60 mM. Then we measured the response of the koji, which was sampled from sake breweries, extract solution with the sensor. The system indicated the metabolism of the yeast against not only glucose but other substances. The response of S. cerevisiae K701 against substances except for glucose was more than the one of K9 relatively. It is consistent with their capacity for the producing acidic substances. This sensor will be able to measure the koji quality easily and fast. The construction of the database from the quality data and the knowledge of the sake master make it possible to forecast the condition of the sake mash at the end of fermentation which takes a few weeks. Thus, the system was expected to estimate not only the quality of the koji but the process for fermenting with the microorganisms.