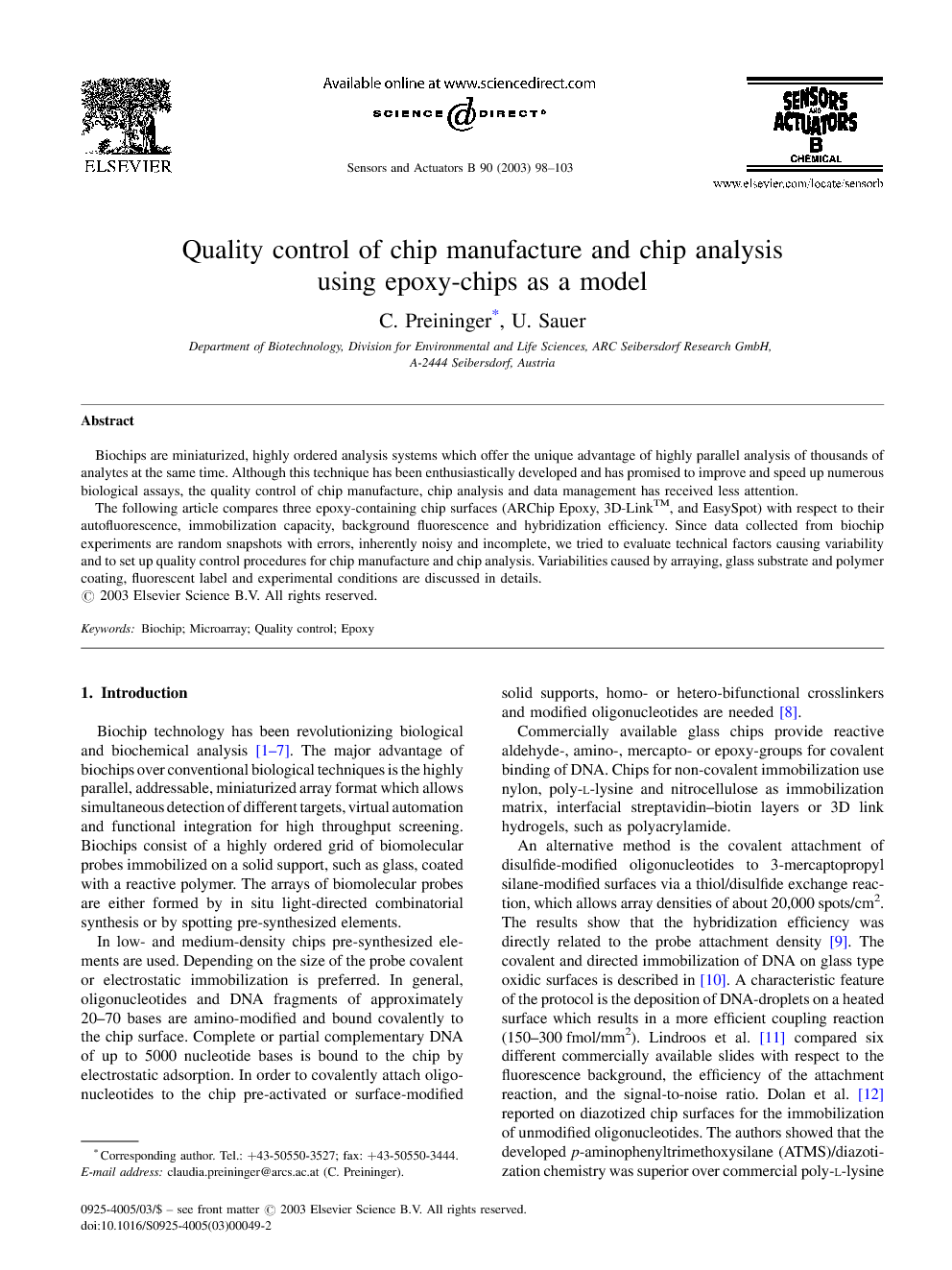 Biochips are miniaturized, highly ordered analysis systems which offer the unique advantage of highly parallel analysis of thousands of analytes at the same time. Although this technique has been enthusiastically developed and has promised to improve and speed up numerous biological assays, the quality control of chip manufacture, chip analysis and data management has received less attention. The following article compares three epoxy-containing chip surfaces (ARChip Epoxy, 3D-Link™, and EasySpot) with respect to their autofluorescence, immobilization capacity, background fluorescence and hybridization efficiency. Since data collected from biochip experiments are random snapshots with errors, inherently noisy and incomplete, we tried to evaluate technical factors causing variability and to set up quality control procedures for chip manufacture and chip analysis. Variabilities caused by arraying, glass substrate and polymer coating, fluorescent label and experimental conditions are discussed in details.

Biochip technology has been revolutionizing biological and biochemical analysis [1], [2], [3], [4], [5], [6] and [7]. The major advantage of biochips over conventional biological techniques is the highly parallel, addressable, miniaturized array format which allows simultaneous detection of different targets, virtual automation and functional integration for high throughput screening. Biochips consist of a highly ordered grid of biomolecular probes immobilized on a solid support, such as glass, coated with a reactive polymer. The arrays of biomolecular probes are either formed by in situ light-directed combinatorial synthesis or by spotting pre-synthesized elements. In low- and medium-density chips pre-synthesized elements are used. Depending on the size of the probe covalent or electrostatic immobilization is preferred. In general, oligonucleotides and DNA fragments of approximately 20–70 bases are amino-modified and bound covalently to the chip surface. Complete or partial complementary DNA of up to 5000 nucleotide bases is bound to the chip by electrostatic adsorption. In order to covalently attach oligonucleotides to the chip pre-activated or surface-modified solid supports, homo- or hetero-bifunctional crosslinkers and modified oligonucleotides are needed [8]. Commercially available glass chips provide reactive aldehyde-, amino-, mercapto- or epoxy-groups for covalent binding of DNA. Chips for non-covalent immobilization use nylon, poly-l-lysine and nitrocellulose as immobilization matrix, interfacial streptavidin–biotin layers or 3D link hydrogels, such as polyacrylamide. An alternative method is the covalent attachment of disulfide-modified oligonucleotides to 3-mercaptopropyl silane-modified surfaces via a thiol/disulfide exchange reaction, which allows array densities of about 20,000 spots/cm2. The results show that the hybridization efficiency was directly related to the probe attachment density [9]. The covalent and directed immobilization of DNA on glass type oxidic surfaces is described in [10]. A characteristic feature of the protocol is the deposition of DNA-droplets on a heated surface which results in a more efficient coupling reaction (150–300 fmol/mm2). Lindroos et al. [11] compared six different commercially available slides with respect to the fluorescence background, the efficiency of the attachment reaction, and the signal-to-noise ratio. Dolan et al. [12] reported on diazotized chip surfaces for the immobilization of unmodified oligonucleotides. The authors showed that the developed p-aminophenyltrimethoxysilane (ATMS)/diazotization chemistry was superior over commercial poly-l-lysine and silylated slides with regard to probe concentration and fluorescence background. When using polyamidoamine (PAMAM) dendrimers containing 64 primary amino groups as linkers, the signal intensity could be increased significantly compared with amino- and epoxy-silanized surfaces [13]. Zhao et al. [14] described the efficient binding of oligodeoxyribonucleotides modified with multiple phosphorothioate moieties to bromoacetamidosilane-coated slides. As obvious from the cited literature, the sensitivity and fluorescence background of biochips critically rely on the effective immobilization of biomolecular probes on the chip. As a matter of different surface chemistries probe concentration, probe length and print buffer need to be optimized for a high quality chip performance. Slide autofluorescence, reproducibility of arraying, spot morphology, binding efficiency and probe purification are also crucial for the accuracy and reliability of chip analysis data. In the present paper, we compare the ARChip Epoxy to two competitors (3D-Link™ and EasySpot) with respect to the slide autofluorescence, immobilization capacity, background fluorescence, spacer length and signal-to-noise ratio. We discuss several technical factors that cause variability disguising actual differences in signal intensities. Because there are no standards available yet in chip technology, the chip surfaces are qualified by hybridization assays performed with the same target, and under the same hybridization and scanning conditions.

This work compares three amino-reactive chip surfaces (ARChip Epoxy, 3D-Link™, and EasySpot) containing epoxy-groups for binding of biomolecular probes. ARChip Epoxy was superior over the competitor products regarding immobilization capacity and signal-to-noise ratio. EasySpot slides showed the best slide-to-slide reproducibility and the most homogeneous surface after blocking and washing. The autofluorescence at λex=635 and 532 nm was lowest for ARChip 3 and 3D-Link™ slides. Criteria for a controlled experiment were pointed out and technical factors, such as reproducible arraying and efficient incorporation of fluorescent label, were discussed as two of numerous sources of variability. In our future work we will evaluate other technical factors causing variability and try to set up guide lines for quality controlled chip manufacture and chip analysis to make chip data reliable and comparable over different slides and experiments.