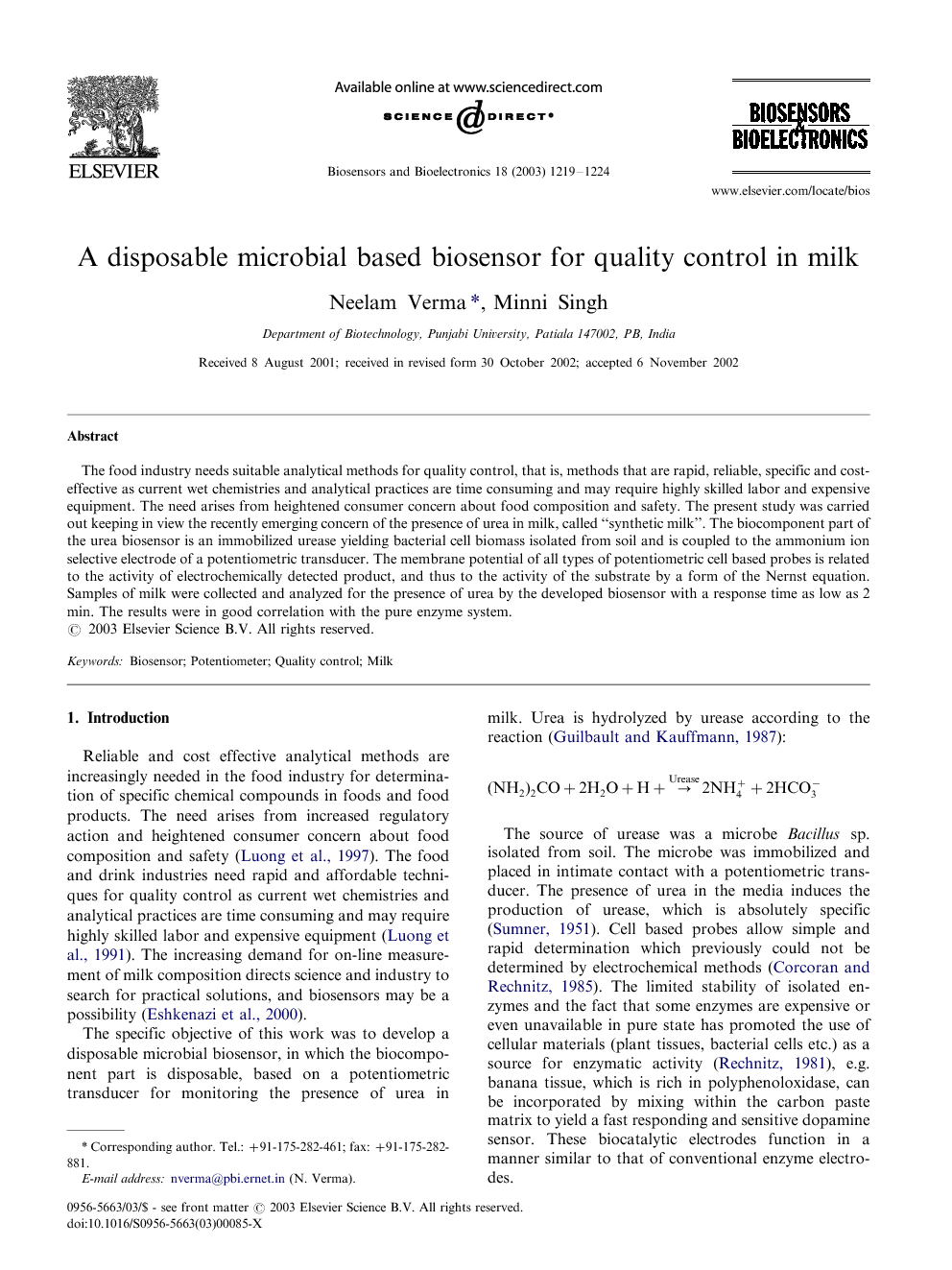 The food industry needs suitable analytical methods for quality control, that is, methods that are rapid, reliable, specific and cost-effective as current wet chemistries and analytical practices are time consuming and may require highly skilled labor and expensive equipment. The need arises from heightened consumer concern about food composition and safety. The present study was carried out keeping in view the recently emerging concern of the presence of urea in milk, called “synthetic milk”. The biocomponent part of the urea biosensor is an immobilized urease yielding bacterial cell biomass isolated from soil and is coupled to the ammonium ion selective electrode of a potentiometric transducer. The membrane potential of all types of potentiometric cell based probes is related to the activity of electrochemically detected product, and thus to the activity of the substrate by a form of the Nernst equation. Samples of milk were collected and analyzed for the presence of urea by the developed biosensor with a response time as low as 2 min. The results were in good correlation with the pure enzyme system.

Reliable and cost effective analytical methods are increasingly needed in the food industry for determination of specific chemical compounds in foods and food products. The need arises from increased regulatory action and heightened consumer concern about food composition and safety (Luong et al., 1997). The food and drink industries need rapid and affordable techniques for quality control as current wet chemistries and analytical practices are time consuming and may require highly skilled labor and expensive equipment (Luong et al., 1991). The increasing demand for on-line measurement of milk composition directs science and industry to search for practical solutions, and biosensors may be a possibility (Eshkenazi et al., 2000). The specific objective of this work was to develop a disposable microbial biosensor, in which the biocomponent part is disposable, based on a potentiometric transducer for monitoring the presence of urea in milk. Urea is hydrolyzed by urease according to the reaction (Guilbault and Kauffmann, 1987). The source of urease was a microbe Bacillus sp. isolated from soil. The microbe was immobilized and placed in intimate contact with a potentiometric transducer. The presence of urea in the media induces the production of urease, which is absolutely specific (Sumner, 1951). Cell based probes allow simple and rapid determination which previously could not be determined by electrochemical methods (Corcoran and Rechnitz, 1985). The limited stability of isolated enzymes and the fact that some enzymes are expensive or even unavailable in pure state has promoted the use of cellular materials (plant tissues, bacterial cells etc.) as a source for enzymatic activity (Rechnitz, 1981), e.g. banana tissue, which is rich in polyphenoloxidase, can be incorporated by mixing within the carbon paste matrix to yield a fast responding and sensitive dopamine sensor. These biocatalytic electrodes function in a manner similar to that of conventional enzyme electrodes. Milk has been referred to as a human's most nearly perfect food from a nutritional standpoint. Its wholesomeness and acceptability depend on the strictest sanitary control, and the sanitary practices employed by the dairy industry (Potter and Hotchkiss, 1995). The average percentage composition of milk is water (82.4%), protein (4.7%), fat (7.4%), lactose (4.6%) and ash (0.78%). The inorganic constituents of ash are Ca (131), Mg (13), Na (54), K (143) and P(100) mg/100 g (Kirk and Sawyer, 1991). The present study was carried out keeping in view the recently emerging concern of the presence of urea in milk. Urea is not a natural constituent of milk and is present as an adulterant. Its presence in milk of dairy cattle could be attributed to excessive N uptake (Broderick and Clayton, 1997) and the rumen efflux of crude protein intake (Hof et al., 1997). The above factors can account for the presence of urea in the range of 1.66–2.66 mM (low milk urea nitrogen (MUN)) and 2.83–4.16 mM (high MUN) (Melendez et al., 2000). A presence of high MUN reduces fertility rates in dairy cattle (Butler et al., 1996). The fact that the developed biosensor has been applied only to the analysis of urea in milk is because the composition of the contents is known. Milk can be considered as containing three basic components namely water, fat and solid-not-fat (SNF). The organic matter in the SNF consists mainly of casein and whey proteins together with lactose and lactic and citric acids. The average protein content of cow, human and buffalo milk are 3.3, 2.0 and 4.7%, respectively. The amino acids have different % compositions in these proteins, like tryptophan present is 26.3±4.8 mg/1.7 g protein. We studied the interference caused by tryptophan. Even at 65-fold concentration there is a negligible increase in release of NH4+ of 0.67 μM. The amino acid degradation occurs in the mitochondrial matrix for which it would have to permeate through cell wall, cell membrane, cytosol and mitochondrial membrane. Thereafter, the glutamate transaminase would catalyze the transfer of the amino group to alpha-ketoglutarate to form glutamate which then undergoes oxidative deamination, catalyzed by glutamate dehydrogenase to release ammonium ion which would require a greater response time in comparison to 2 min of response time of the biosensor developed by us. Regarding the interference caused by other nitrogenous compounds like creatine and creatinine, the culture is not positive for deaminases as per the biochemical report of identification. Also, these compounds are prevelant in clinical samples. By further improvement of the present sensor its applications can be broadened, for now it has been confined to analysis of milk samples only.

We have developed a microbial based biosensor to determine the presence of urea in milk. A good correlation of results was obtained with pure enzyme system and the spectrophotometric methods. However, it is worth the mention that since milk is a complex system it contains many interferents which makes conventional methods less reliable. We conclude that the present biosensor has the advantages of specificity, portability, simplicity, reliability and continuous real time analysis.