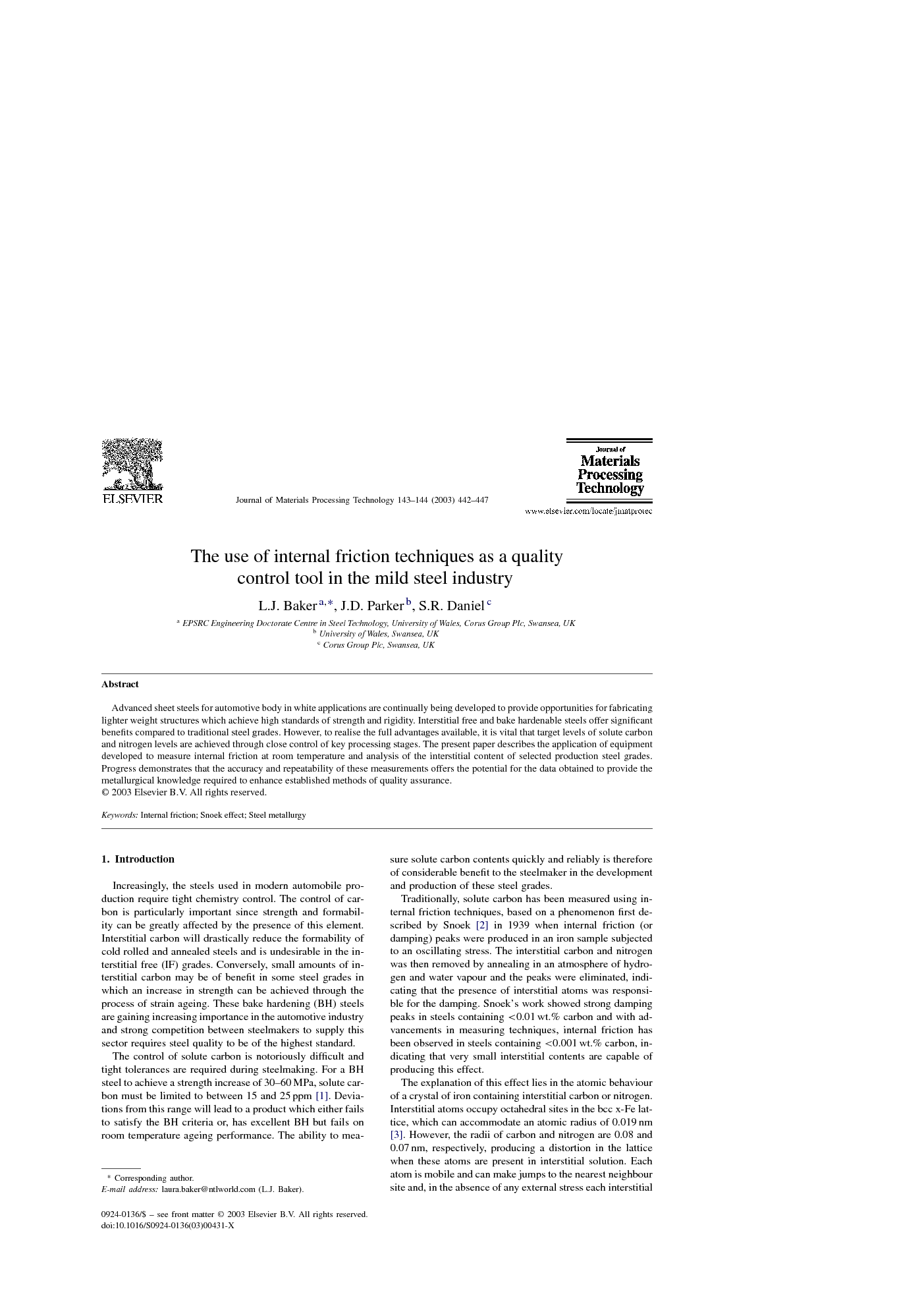 Advanced sheet steels for automotive body in white applications are continually being developed to provide opportunities for fabricating lighter weight structures which achieve high standards of strength and rigidity. Interstitial free and bake hardenable steels offer significant benefits compared to traditional steel grades. However, to realise the full advantages available, it is vital that target levels of solute carbon and nitrogen levels are achieved through close control of key processing stages. The present paper describes the application of equipment developed to measure internal friction at room temperature and analysis of the interstitial content of selected production steel grades. Progress demonstrates that the accuracy and repeatability of these measurements offers the potential for the data obtained to provide the metallurgical knowledge required to enhance established methods of quality assurance.

Increasingly, the steels used in modern automobile production require tight chemistry control. The control of carbon is particularly important since strength and formability can be greatly affected by the presence of this element. Interstitial carbon will drastically reduce the formability of cold rolled and annealed steels and is undesirable in the interstitial free (IF) grades. Conversely, small amounts of interstitial carbon may be of benefit in some steel grades in which an increase in strength can be achieved through the process of strain ageing. These bake hardening (BH) steels are gaining increasing importance in the automotive industry and strong competition between steelmakers to supply this sector requires steel quality to be of the highest standard. The control of solute carbon is notoriously difficult and tight tolerances are required during steelmaking. For a BH steel to achieve a strength increase of 30–60 MPa, solute carbon must be limited to between 15 and 25 ppm [1]. Deviations from this range will lead to a product which either fails to satisfy the BH criteria or, has excellent BH but fails on room temperature ageing performance. The ability to measure solute carbon contents quickly and reliably is therefore of considerable benefit to the steelmaker in the development and production of these steel grades. Traditionally, solute carbon has been measured using internal friction techniques, based on a phenomenon first described by Snoek [2] in 1939 when internal friction (or damping) peaks were produced in an iron sample subjected to an oscillating stress. The interstitial carbon and nitrogen was then removed by annealing in an atmosphere of hydrogen and water vapour and the peaks were eliminated, indicating that the presence of interstitial atoms was responsible for the damping. Snoek’s work showed strong damping peaks in steels containing <0.01 wt.% carbon and with advancements in measuring techniques, internal friction has been observed in steels containing <0.001 wt.% carbon, indicating that very small interstitial contents are capable of producing this effect. The explanation of this effect lies in the atomic behaviour of a crystal of iron containing interstitial carbon or nitrogen. Interstitial atoms occupy octahedral sites in the bcc x-Fe lattice, which can accommodate an atomic radius of 0.019 nm [3]. However, the radii of carbon and nitrogen are 0.08 and 0.07 nm, respectively, producing a distortion in the lattice when these atoms are present in interstitial solution. Each atom is mobile and can make jumps to the nearest neighbour site and, in the absence of any external stress each interstitial site has equal probability of occupation, as the associated lattice distortion is the same. If, however, an external stress is applied in one direction, the corresponding interstice becomes enlarged and acts as a preferential site for interstitial atoms through the reduction in lattice strain. The accumulation of atoms in these interstices will produce a net strain in that direction comprising an elastic and anelastic component. The anelastic strain component will develop over a characteristic time period, τ, which when measured as a function of applied stress frequency or temperature gives rise to the Snoek peak illustrated in Fig. 1. The interstitial carbon peak will typically have a maximum at ∼0.1 Hz at room temperature allowing it to be easily distinguished from other damping phenomena. The internal friction, Q−1, can be described by the Debye relationship [4]: equation(1) View the MathML source where ζ is the radian frequency of the vibration and is equal to 2ζf, where f the frequency of vibration, τ the relaxation time and Δ the relaxation strength. The relaxation strength is proportional to the number of interstitial atoms involved in the stress-induced ordering so that a direct calculation of the interstitial content of the sample can be made. This calculation inevitably involves the use of a proportionality factor, A, of the type in the following equation: equation(2) View the MathML source The development of modern internal friction equipment has made the measurement of damping relatively simple, however, there is still much debate over the determination of the constant, A, in Eq. (2). This constant may be dependent on metallurgical factors such as crystallographic texture, grain size, dislocation density and concentration of substitutional atoms. It is also highly dependent on the type of equipment used and the temperature of the measurement. It is the aim of the work described here to assess the practical implications of these metallurgical factors on the analysis of interstitial contents with a view to simplifying the measurement process for use in an industrial context.

The work presented here has shown that internal friction can be reliably measured using the equipment described and that interstitial contents can be determined using a constant with the value 3.7×10−5 wt. ppm−1. The maximum height of the internal friction peak was found to vary significantly with changes in material sampling. Variation in sample orientation resulted in an increase in internal friction of up to 30%, the maximum being observed in samples taken at 45° to the rolling direction. This was attributed to changes in crystallographic texture aligned with the stress axis, resulting in differing amounts of relaxation. Internal friction was also seen to decrease with increases in temper rolling, which was attributed to an increase in dislocation density. Although internal friction was found to vary in this way, converting the data to solute carbon contents, produced a variation of <4 ppm which is within the accepted chemistry range. It is concluded then that although factors such as crystallographic texture and temper rolling reduction influence the measurement of internal friction, when considering the solute carbon content, the variation becomes negligible. Internal friction techniques, such as the one described, therefore, can offer a viable method for determining the solute carbon content of commercially produced strip steel samples.