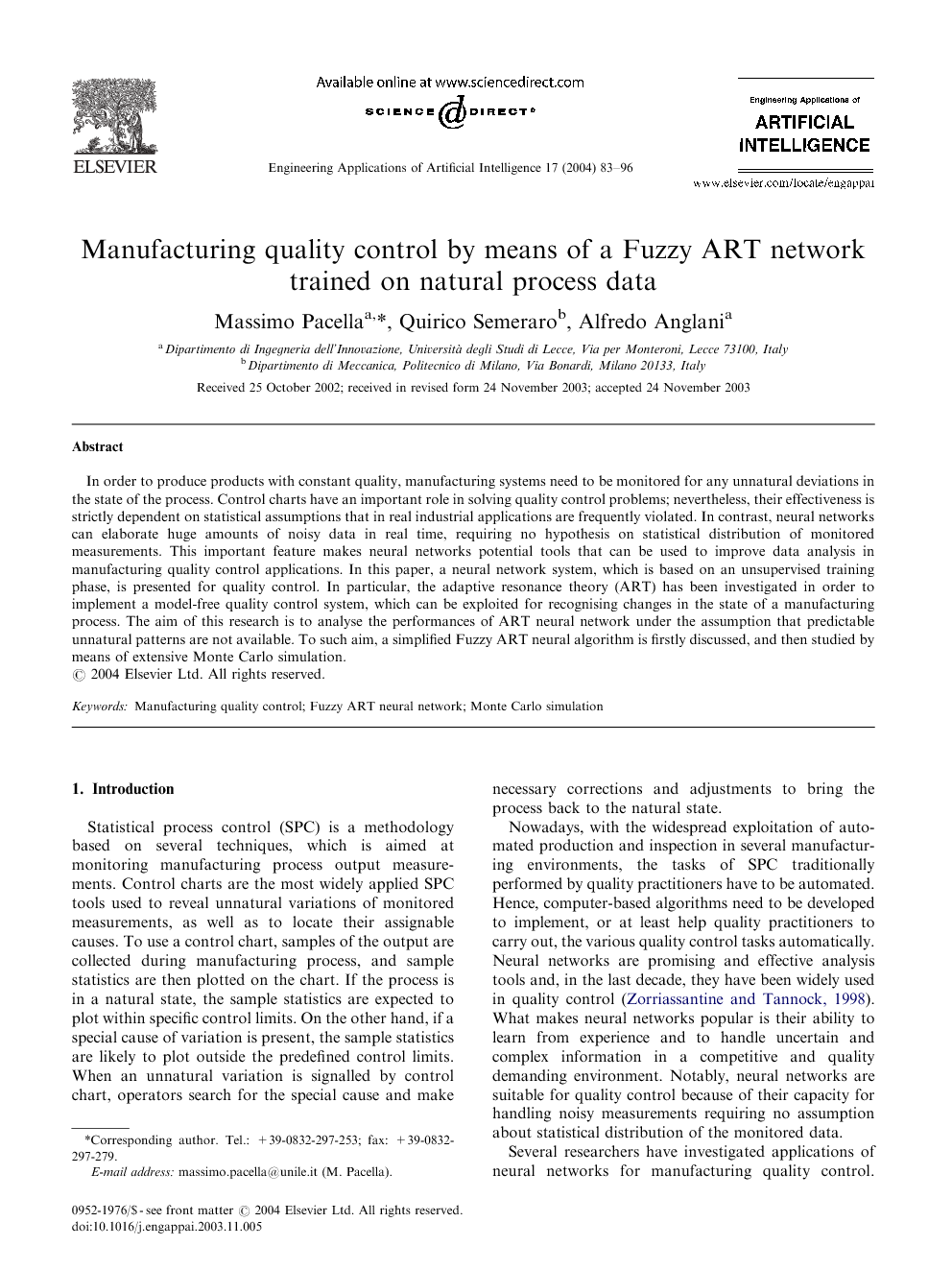 In order to produce products with constant quality, manufacturing systems need to be monitored for any unnatural deviations in the state of the process. Control charts have an important role in solving quality control problems; nevertheless, their effectiveness is strictly dependent on statistical assumptions that in real industrial applications are frequently violated. In contrast, neural networks can elaborate huge amounts of noisy data in real time, requiring no hypothesis on statistical distribution of monitored measurements. This important feature makes neural networks potential tools that can be used to improve data analysis in manufacturing quality control applications. In this paper, a neural network system, which is based on an unsupervised training phase, is presented for quality control. In particular, the adaptive resonance theory (ART) has been investigated in order to implement a model-free quality control system, which can be exploited for recognising changes in the state of a manufacturing process. The aim of this research is to analyse the performances of ART neural network under the assumption that predictable unnatural patterns are not available. To such aim, a simplified Fuzzy ART neural algorithm is firstly discussed, and then studied by means of extensive Monte Carlo simulation.

Statistical process control (SPC) is a methodology based on several techniques, which is aimed at monitoring manufacturing process output measurements. Control charts are the most widely applied SPC tools used to reveal unnatural variations of monitored measurements, as well as to locate their assignable causes. To use a control chart, samples of the output are collected during manufacturing process, and sample statistics are then plotted on the chart. If the process is in a natural state, the sample statistics are expected to plot within specific control limits. On the other hand, if a special cause of variation is present, the sample statistics are likely to plot outside the predefined control limits. When an unnatural variation is signalled by control chart, operators search for the special cause and make necessary corrections and adjustments to bring the process back to the natural state. Nowadays, with the widespread exploitation of automated production and inspection in several manufacturing environments, the tasks of SPC traditionally performed by quality practitioners have to be automated. Hence, computer-based algorithms need to be developed to implement, or at least help quality practitioners to carry out, the various quality control tasks automatically. Neural networks are promising and effective analysis tools and, in the last decade, they have been widely used in quality control (Zorriassantine and Tannock, 1998). What makes neural networks popular is their ability to learn from experience and to handle uncertain and complex information in a competitive and quality demanding environment. Notably, neural networks are suitable for quality control because of their capacity for handling noisy measurements requiring no assumption about statistical distribution of the monitored data. Several researchers have investigated applications of neural networks for manufacturing quality control. Pugh (1991) proposed the first reported neural network for quality control. The multi-layer perceptron (MLP) network, trained by means of the supervised back-propagation (BP) learning algorithm (Bishop, 1995), has been used to detect mean shifts. Guo and Dooley (1992), and Smith (1994) trained an MLP BP network for identifying positive shifts in both mean and variance. Cheng (1995) later, trained an MLP BP neural network for identifying positive/negative shifts and upward/downward trends of the process mean as well. Guh and Tannock (1999) developed an MLP BP neural network approach for concurrent unnatural pattern recognition. Cook et al. (2001) discussed the development of an MLP BP neural network to identify changes in the variance of serially correlated process parameters. The MLP BP network has been exploited successfully in pattern recognition, but the slowness in training still poses some inconveniences for practical applications. Indeed, the convergence of the BP algorithm requires a huge number of iterations, as well as an adequate number of training examples. Therefore, other feed-forward neural networks for quality control have been proposed in the literature. For example, Cook and Chiu (1998), in order to recognise mean shifts in auto-correlated manufacturing process parameters, proposed a radial basis function (RBF) neural network system. A shared feature of the most diffused neural methods for quality control is the exploitation of supervised training algorithms. The use of these techniques is based on the hypothesis that user knows in advance the group of unnatural patterns that must be discovered by neural network. A prior knowledge of pattern shapes is essential for generating training data that mimic the actual unnatural outcomes. However, in real industrial cases, unnatural process outcomes cannot be manifested by the appearance of predictable patterns, thus mathematical models are not readily available or they cannot be formulated. The present paper proposes a different neural network approach for process monitoring, when no previous knowledge on the distribution of unnatural data is available. The proposed approach is based on the adaptive resonance theory (ART) neural network that is capable of fast, stable and cumulative learning. The ART network is a neural algorithm, which is used to cluster arbitrary data into groups with similar features. Al-Ghanim (1997) presented an ART1 neural network (the binary version of the ART algorithm) as a means to distinguish natural from unnatural variations in the outcomes of a generic manufacturing process. The author proposed to train the ART1 network using a set of natural data patterns produced by the monitored process. During the training phase, the network clusters natural patterns of data into groups with similar features, and when it is confronted by a new input, it produces a response that indicates which cluster the pattern belongs to (if any). Therefore, the neural network is not intended to indicate the type of unnatural pattern detected in process outputs. It provides an indication that a structural change in process outputs has occurred when input pattern does not fit to any of the learned natural categories. The use of a neural system that monitors process outputs without a prior knowledge of unnatural patterns is appealing in real industrial applications. Indeed, only knowledge of the natural behaviour of the process is required in order to train the neural network. Furthermore, the neural network can operate in a plastic mode (i.e. a continuous and cumulative training mode) as long as new patterns are presented to it. The remainder of this paper is structured as follows. The ART is presented in Section 2. The reference test case is illustrated in Section 3. The proposed Fuzzy ART neural system and the training/testing algorithms are discussed in 4 and 5, respectively. Then, simulation methodology and experimental results are both provided in Section 6. Finally, the last section gives conclusions and discusses some directions for further research.

With the advanced data-collection systems (e.g. coordinate measure machine, machine vision system and scanning laser system), and the movements towards computer-integrated manufacturing (CIM), a large amount of measurements on each product can be obtained at the point of manufacture. In this new manufacturing scenario, a demand exists for the automation of SPC implementation. New methods should be developed in order to accommodate rapid data inputs rates, to utilise data from each product manufactured and, in general, to take advantage of this newly available data. In this work, a new neural technique has been investigated as promising tool for the above-mentioned purposes. In particular, a Fuzzy ART neural system has been presented for manufacturing quality monitoring. The proposed neural system is mainly intended for identifying unnatural process behaviour by detecting changes in the state of the process. Several characteristics of the Fuzzy ART neural network make it a practical tool for quality control applications over supervised ones. The most evident is the short learning time required by the proposed approach. Since the maximum vigilance parameter has been exploited for network learning, the number of list presentations required to achieve a training of the network can be reduced to only one. Once a pattern is presented to the neural network, it is stored into a specific category and no more iteration is required to learn it. As an example of computational time, by means the proposed PLP learning approach, the neural network requires around 2 min to perform training for 7500 patterns of 75 points on a Pentium III 800 MHz. Potential industrial applications of the proposed approach are continuous product manufacturing operations, including the manufacture of paper and wood products, chemicals, and cold-rolled steel products. In these cases, with the widespread exploitation of automated production and inspection, the tasks of SPC traditionally performed by quality practitioners have to be automated. Computer-based algorithms need to be developed to implement the various quality control tasks automatically. In addition, data collected at regular time intervals, by automatic sensors, can be serially correlated. Consequently, the strength of traditional SPC control charts to identify the presence of assignable causes is weakened or invalidated. The main advantage of the proposed system over others neural techniques is that it does not require previous information about unnatural pattern appearances, related mathematical models, or probability distribution functions. The proposed system can be potentially adopted to signal any kinds of unnatural pattern, so it provides a powerful diagnostic tool for detecting assignable causes in real processes. Therefore, the proposed method can be potentially used for identifying changes in the process parameters in the presence of correlation and it allows improved process control in continuous manufacturing operations. There are three main possible directions for future research. First, the effect of departures from normality and independence for the reference manufacturing process must be thoroughly investigated. Second, the neural network system can be improved in order to recognise not just generic unnatural data, but also specific unnatural patterns. Third, the applicability of the proposed method can be extended and analysed in the case of multivariate processes.