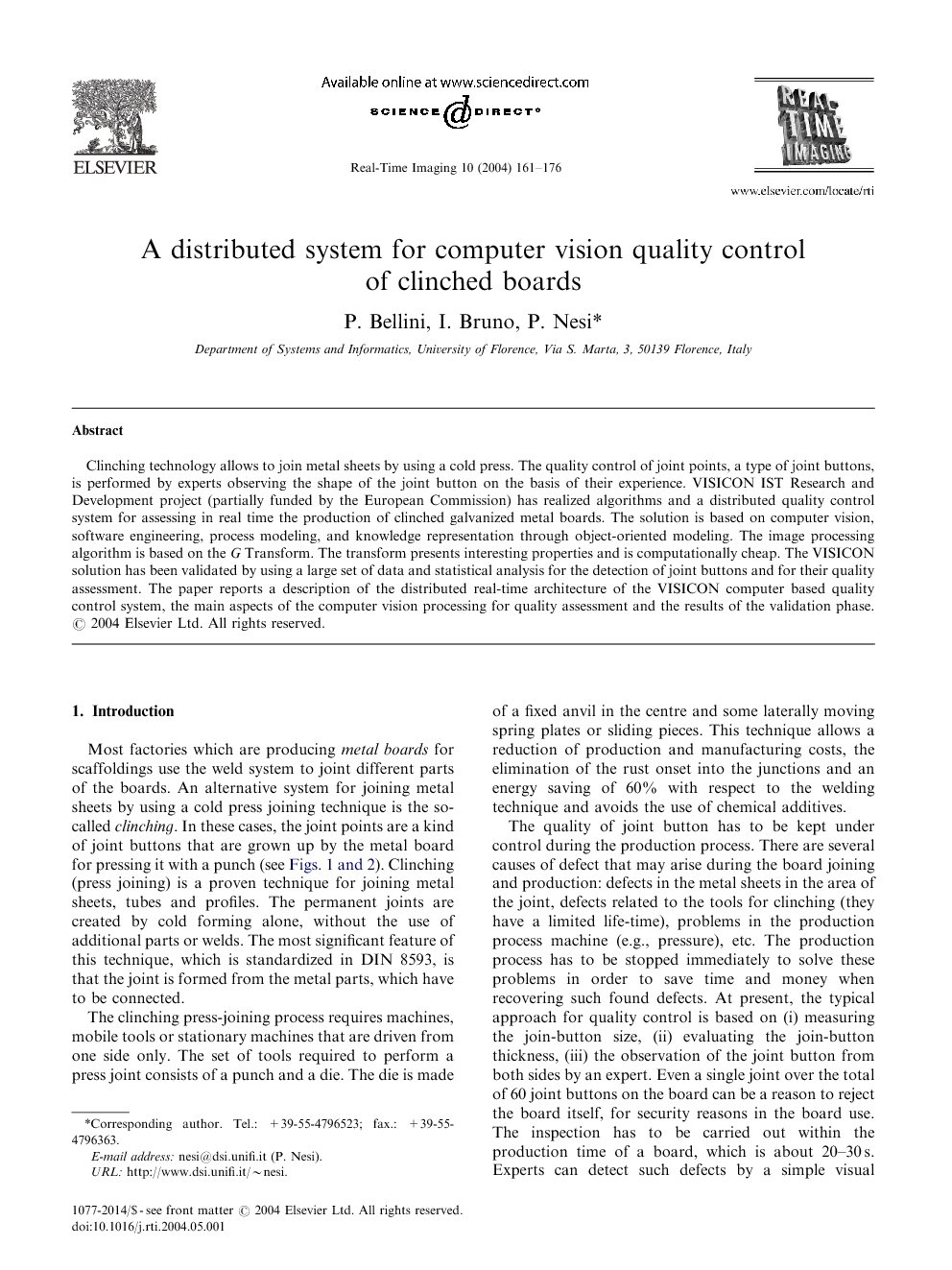 Clinching technology allows to join metal sheets by using a cold press. The quality control of joint points, a type of joint buttons, is performed by experts observing the shape of the joint button on the basis of their experience. VISICON IST Research and Development project (partially funded by the European Commission) has realized algorithms and a distributed quality control system for assessing in real time the production of clinched galvanized metal boards. The solution is based on computer vision, software engineering, process modeling, and knowledge representation through object-oriented modeling. The image processing algorithm is based on the G Transform. The transform presents interesting properties and is computationally cheap. The VISICON solution has been validated by using a large set of data and statistical analysis for the detection of joint buttons and for their quality assessment. The paper reports a description of the distributed real-time architecture of the VISICON computer based quality control system, the main aspects of the computer vision processing for quality assessment and the results of the validation phase.

Most factories which are producing metal boards for scaffoldings use the weld system to joint different parts of the boards. An alternative system for joining metal sheets by using a cold press joining technique is the so-called clinching. In these cases, the joint points are a kind of joint buttons that are grown up by the metal board for pressing it with a punch (see Fig. 1 and Fig. 2). Clinching (press joining) is a proven technique for joining metal sheets, tubes and profiles. The permanent joints are created by cold forming alone, without the use of additional parts or welds. The most significant feature of this technique, which is standardized in DIN 8593, is that the joint is formed from the metal parts, which have to be connected.The clinching press-joining process requires machines, mobile tools or stationary machines that are driven from one side only. The set of tools required to perform a press joint consists of a punch and a die. The die is made of a fixed anvil in the centre and some laterally moving spring plates or sliding pieces. This technique allows a reduction of production and manufacturing costs, the elimination of the rust onset into the junctions and an energy saving of 60% with respect to the welding technique and avoids the use of chemical additives. The quality of joint button has to be kept under control during the production process. There are several causes of defect that may arise during the board joining and production: defects in the metal sheets in the area of the joint, defects related to the tools for clinching (they have a limited life-time), problems in the production process machine (e.g., pressure), etc. The production process has to be stopped immediately to solve these problems in order to save time and money when recovering such found defects. At present, the typical approach for quality control is based on (i) measuring the join-button size, (ii) evaluating the join-button thickness, (iii) the observation of the joint button from both sides by an expert. Even a single joint over the total of 60 joint buttons on the board can be a reason to reject the board itself, for security reasons in the board use. The inspection has to be carried out within the production time of a board, which is about 20–30 s. Experts can detect such defects by a simple visual inspection on the buttons. This aspect convinced us to start researching a vision-based solution for automating this process. In this paper, VISICON (VIsion System Inspection for CONtrol of Clinched Boards) FP5 IST Research and Development project, partially funded by the European Commission, is presented. VISICON proposes a solution for realising a distributed quality control system for the controlled production of clinched galvanized metal boards for civil constructions, scaffolding. They are used by carpenters to move from one place to another, when building and/or restoring walls, etc. VISICON architecture consists of a set of CCD cameras managed by industrial computers which are controlled by a quality control server for managing the whole process. The image analysis and a priori-knowledge about the joint buttons structure and their position on the board allow deciding whether the joints of metal boards are defective or not. In this manner, the quality of boards and the production efficiency is improved, thus reducing the number of defective boards. The solution integrates aspects of software engineering, process modeling, and knowledge representation and computer vision by using an object-oriented modeling [1] and [2]. The computer vision algorithms are based on the G Transform that allows the detection and the assessment of circular shapes. The realization of distributed computer vision architectures is becoming very relevant for the realization of real-time processing systems [3], [4], [5], [6] and [7]. The paper is organized as follows. In Section 2, the VISICON architecture is reported by describing both hardware and software aspects. Section 3 describes the Object-Oriented data model used for modeling software on quality control supervisor and on local image inspectors. Furthermore, the synchronization process and model for the estimation of the overall quality are reported. In Section 4, details regarding the computer vision algorithms and process are reported. Section 5 presents the experimental results with their corresponding statistical analysis and configuration details. Conclusions are drawn in Section 6.

VISICON is a general-purpose distributed quality control system based on computer vision. The VISICON architecture allows the real-time evaluation of boards with multiple clinched areas, by delegating to a variable number of industrial PCs the image processing aspects, together with the corresponding computational cost. This allows scaling the system on the basis of the production line speed and end-user's quality requirements. The developed architecture is strongly modular and easily customisable to other industrial applications. The number of Local Inspectors may vary depending on the board model and production line speed, so each customer can scale the system on the basis of his needs. Image acquisition is performed under controlled conditions, inside a dark tunnel enclosing sources of diffused light. A specifically defined transform detects radially symmetric shapes like joint buttons. Its calculation can be performed in real time for both the effective joint point detection and quality assessment. VISICON solution has been studied with respect to the actual industrial situation of several potential partners and with a special attention devoted to a real end user, like Ediltavole. It is a SME which produces boards for the frames of buildings in the centre of Italy. A typical factory has three clinching machines, working on three turns per day on 5 days per week, for a total production of about 15,000 boards per week. About 1–2% of these boards are defected by inaccurate metal sheets positioning or clinching machine failures, but about 95% of the defective boards can be corrected and delivered on the market by clinching them again with acceptable results but spending time and money. Thus, the wasted material can be estimated in about 11 boards per week. People charged with the task of detecting clinching defects, in time for stopping the production; do work several man hours per week. Therefore, time and costs related to these people can be saved as well, with the proposed solution. In addition, some man hours per week are spent to clinch again defective boards for recovering the 95% of defective boards. A prototype quality-control system using four industrial PCs and 12 CCD Cameras has been tested on some thousands of boards on a real production line. It has successfully provided an on-line, continuous control of quality recognising defective boards with a better than 90% accuracy. Joint detection performance exceeded 99% and this result applies also to overall board quality control. In the case of a major fault it is very important to stop the clinching machine to avoid the production of other joints. The costs of a stopped production are lower than those faced when recovering errors on badly produced boards.