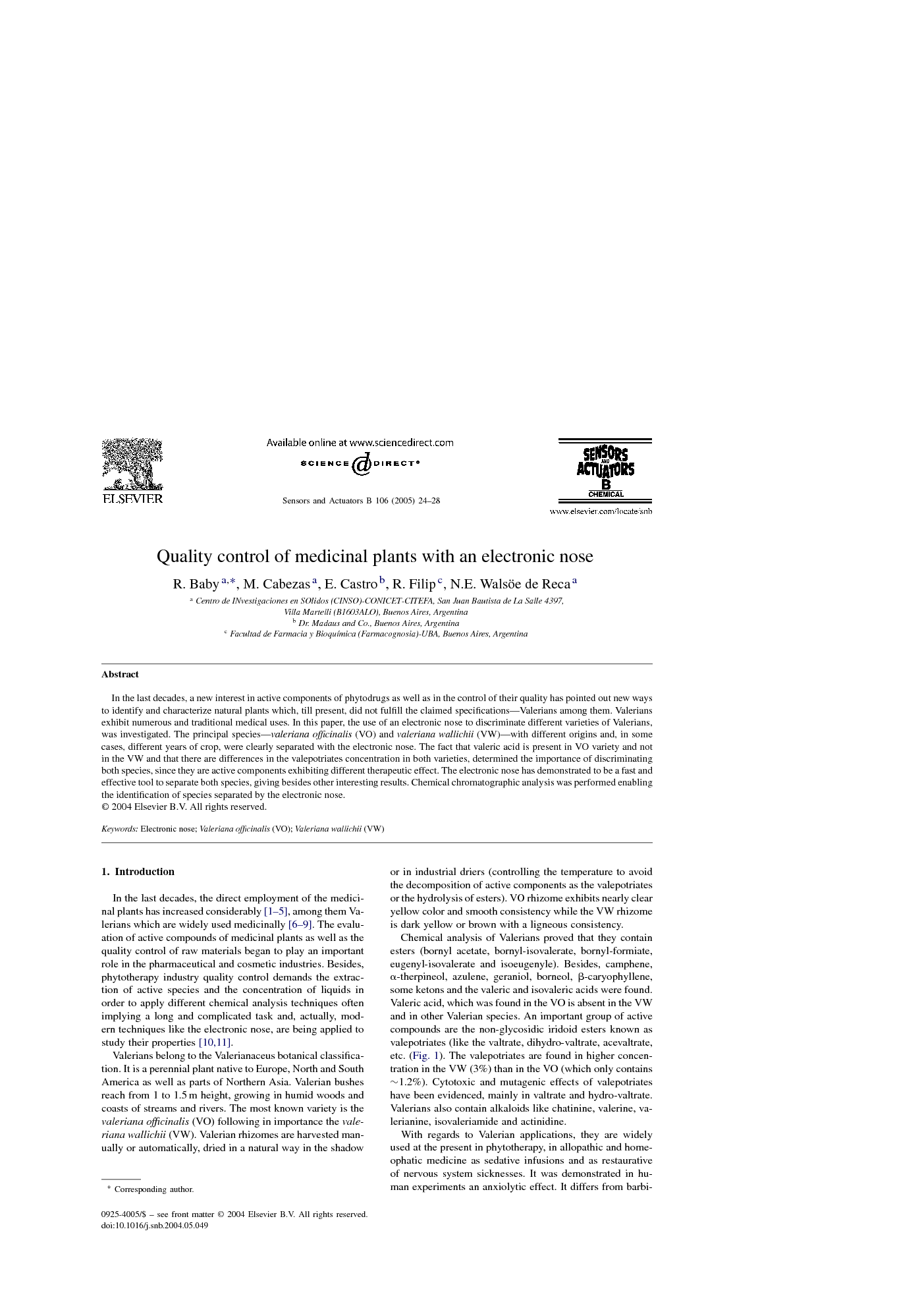 In the last decades, a new interest in active components of phytodrugs as well as in the control of their quality has pointed out new ways to identify and characterize natural plants which, till present, did not fulfill the claimed specifications—Valerians among them. Valerians exhibit numerous and traditional medical uses. In this paper, the use of an electronic nose to discriminate different varieties of Valerians, was investigated. The principal species—valeriana officinalis (VO) and valeriana wallichii (VW)—with different origins and, in some cases, different years of crop, were clearly separated with the electronic nose. The fact that valeric acid is present in VO variety and not in the VW and that there are differences in the valepotriates concentration in both varieties, determined the importance of discriminating both species, since they are active components exhibiting different therapeutic effect. The electronic nose has demonstrated to be a fast and effective tool to separate both species, giving besides other interesting results. Chemical chromatographic analysis was performed enabling the identification of species separated by the electronic nose.

In the last decades, the direct employment of the medicinal plants has increased considerably [1], [2], [3], [4] and [5], among them Valerians which are widely used medicinally [6], [7], [8] and [9]. The evaluation of active compounds of medicinal plants as well as the quality control of raw materials began to play an important role in the pharmaceutical and cosmetic industries. Besides, phytotherapy industry quality control demands the extraction of active species and the concentration of liquids in order to apply different chemical analysis techniques often implying a long and complicated task and, actually, modern techniques like the electronic nose, are being applied to study their properties [10] and [11]. Valerians belong to the Valerianaceus botanical classification. It is a perennial plant native to Europe, North and South America as well as parts of Northern Asia. Valerian bushes reach from 1 to 1.5 m height, growing in humid woods and coasts of streams and rivers. The most known variety is the valeriana officinalis (VO) following in importance the valeriana wallichii (VW). Valerian rhizomes are harvested manually or automatically, dried in a natural way in the shadow or in industrial driers (controlling the temperature to avoid the decomposition of active components as the valepotriates or the hydrolysis of esters). VO rhizome exhibits nearly clear yellow color and smooth consistency while the VW rhizome is dark yellow or brown with a ligneous consistency. Chemical analysis of Valerians proved that they contain esters (bornyl acetate, bornyl-isovalerate, bornyl-formiate, eugenyl-isovalerate and isoeugenyle). Besides, camphene, α-therpineol, azulene, geraniol, borneol, β-caryophyllene, some ketons and the valeric and isovaleric acids were found. Valeric acid, which was found in the VO is absent in the VW and in other Valerian species. An important group of active compounds are the non-glycosidic iridoid esters known as valepotriates (like the valtrate, dihydro-valtrate, acevaltrate, etc. (Fig. 1). The valepotriates are found in higher concentration in the VW (3%) than in the VO (which only contains ∼1.2%). Cytotoxic and mutagenic effects of valepotriates have been evidenced, mainly in valtrate and hydro-valtrate. Valerians also contain alkaloids like chatinine, valerine, valerianine, isovaleriamide and actinidine.With regards to Valerian applications, they are widely used at the present in phytotherapy, in allopathic and homeophatic medicine as sedative infusions and as restaurative of nervous system sicknesses. It was demonstrated in human experiments an anxiolytic effect. It differs from barbiturics because they do not interact with alcohol or produce hang-over when weaking up in the morning. It is also weakly hypotensor and antispasmodic (intestinal cramps, digestive problems, muscle cramps related to stresses, etc.) and exhibits diuretic properties. In this paper, the use of an electronic nose to discriminate different varities of Valerians, was investigated. Valerians species with different origins and, in some cases, different years of crop, were separated with an electronic nose. The fact that valeric acid is present in VO variety and not in the VW and that, there are differences in the valepotriates concentration, determined the importance of discriminating both species exhibiting different therapeutic activity. The electronic nose has demonstrated to be a fast and effective tool to separate both species giving, besides, other interesting results.

Comparative analysis, as obtained by the electronic nose and chromatography, enabled to discriminate valeriana officinalis and valeriana wallichii types, to classify a non-specified specimen as belonging to the VW variety and to agree that another non-specified specimen belonged to a different Valerian form. Considering that the chromatographic analysis demands a longer time to separate the VO and VW varieties (specimens and reactifs preparation, chemical development and data evaluation), the electronic nose has proved to be a fast tool to discriminate not only both species, but to separate specimens from different origin or crop belonging to the same Valerian variety. In spite of both species generally regarded as safe from the toxicity point of view, the interest to separate both varieties rise from their different concentration of active compounds, like valeric acid and valepotriates and because their sedative effects are still going to be studied and quantified. It is not proved, till now, that these herbal sedatives cause physical addiction but, they have to be used with caution since they may lead to emotional dependence.