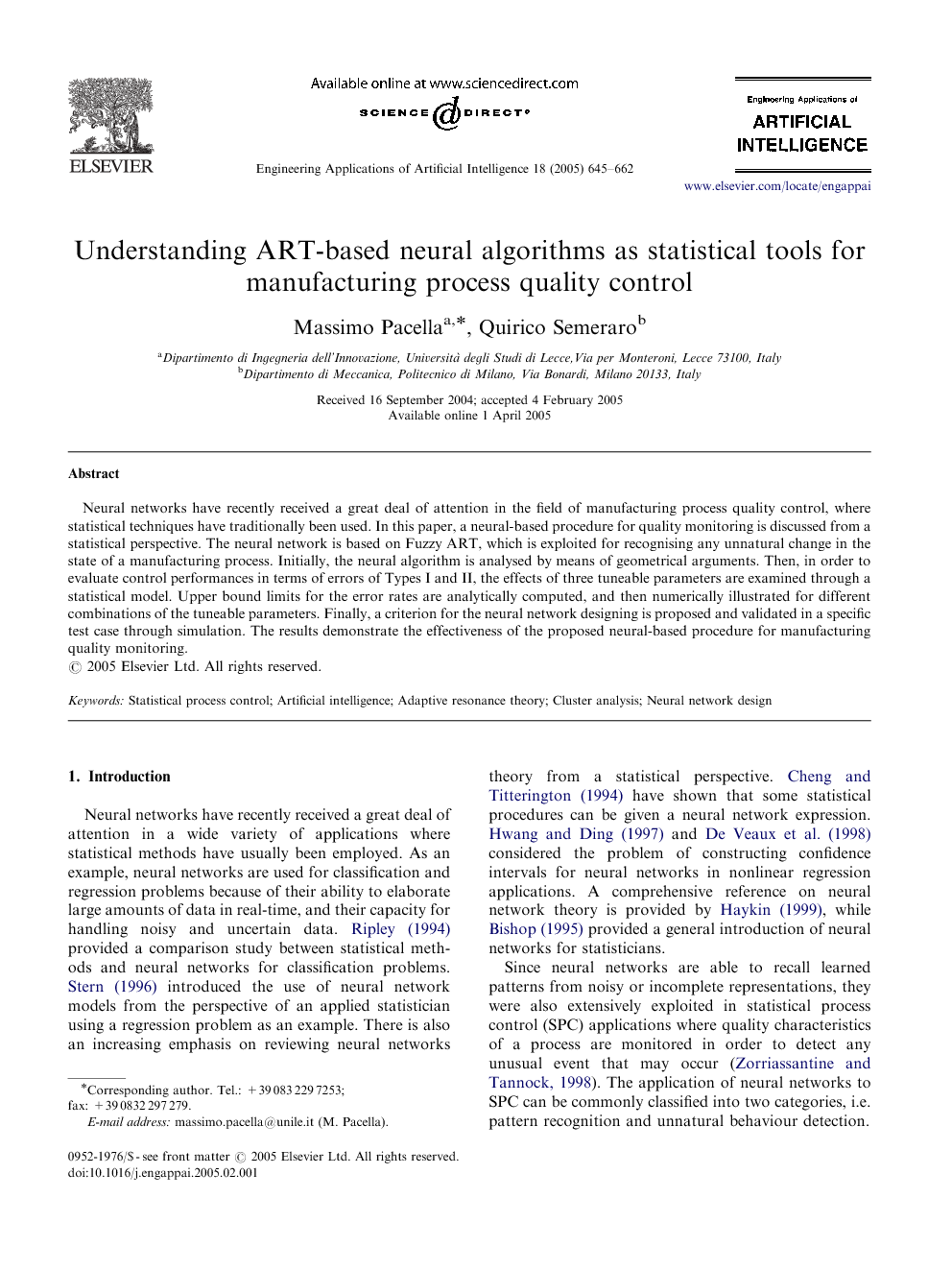 Neural networks have recently received a great deal of attention in the field of manufacturing process quality control, where statistical techniques have traditionally been used. In this paper, a neural-based procedure for quality monitoring is discussed from a statistical perspective. The neural network is based on Fuzzy ART, which is exploited for recognising any unnatural change in the state of a manufacturing process. Initially, the neural algorithm is analysed by means of geometrical arguments. Then, in order to evaluate control performances in terms of errors of Types I and II, the effects of three tuneable parameters are examined through a statistical model. Upper bound limits for the error rates are analytically computed, and then numerically illustrated for different combinations of the tuneable parameters. Finally, a criterion for the neural network designing is proposed and validated in a specific test case through simulation. The results demonstrate the effectiveness of the proposed neural-based procedure for manufacturing quality monitoring.

With the widespread exploitation of automated production and inspection in several industrial applications, the tasks of SPC, traditionally performed by quality practitioners, have to be automated. As an example, applications based on continuous product manufacturing operations, including the manufacture of paper and wood products, chemicals, and cold-rolled steel products require computer-based algorithms that implement various quality control tasks automatically. This paper is focused on an ART-based neural network for automating quality control of manufacturing processes and is mainly intended to provide a basic description of such a network to quality practitioners with a statistical background. We achieve this by deriving a statistical model of Fuzzy ART algorithm in a very specific case in order to understand the capabilities and potentials of neural networks for manufacturing quality control. The analysed neural approach is mainly intended for identifying unnatural process behaviour by detecting changes in the state of the process. This method is quite simple to implement, and the training set can be limited to a single ideal pattern. Some important details of the proposed neural-based control schema are discussed through geometrical concepts, while the effects of three tuneable parameters on the performance are analytically examined by means of a probabilistic model. The performances of the control system reported in the paper are obtained analytically and the problem of predicting neural network performance, as upper bound limits for the errors of Types I and II, is considered. Taking advantage of the statistical analysis described in the present work, a promising future direction of research can be related to the design of a Fuzzy ART control procedure in which the values of the tuneable parameters is achieved by optimising (i.e. minimising) a specific cost function.