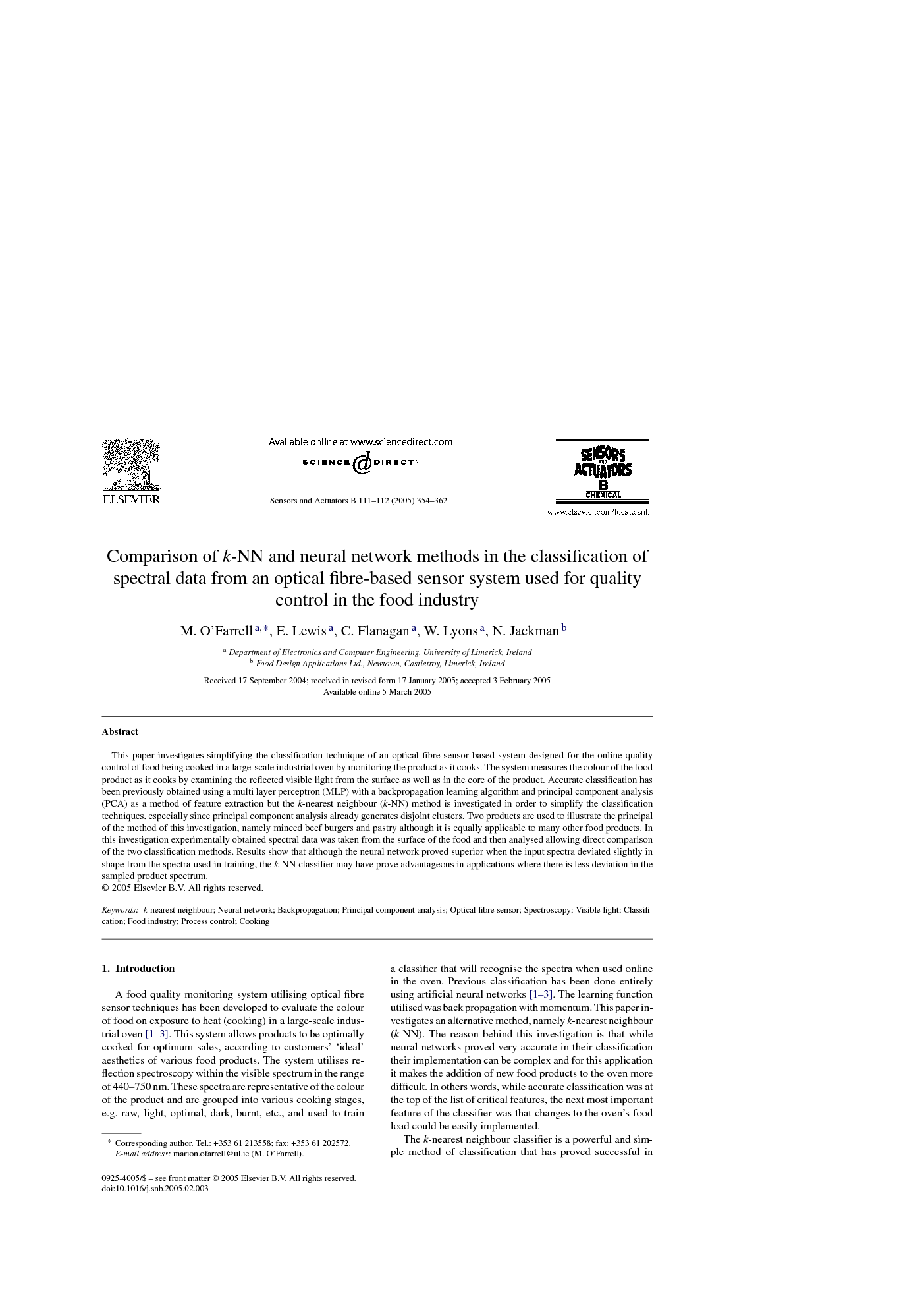 This paper investigates simplifying the classification technique of an optical fibre sensor based system designed for the online quality control of food being cooked in a large-scale industrial oven by monitoring the product as it cooks. The system measures the colour of the food product as it cooks by examining the reflected visible light from the surface as well as in the core of the product. Accurate classification has been previously obtained using a multi layer perceptron (MLP) with a backpropagation learning algorithm and principal component analysis (PCA) as a method of feature extraction but the k-nearest neighbour (k-NN) method is investigated in order to simplify the classification techniques, especially since principal component analysis already generates disjoint clusters. Two products are used to illustrate the principal of the method of this investigation, namely minced beef burgers and pastry although it is equally applicable to many other food products. In this investigation experimentally obtained spectral data was taken from the surface of the food and then analysed allowing direct comparison of the two classification methods. Results show that although the neural network proved superior when the input spectra deviated slightly in shape from the spectra used in training, the k-NN classifier may have prove advantageous in applications where there is less deviation in the sampled product spectrum.

A food quality monitoring system utilising optical fibre sensor techniques has been developed to evaluate the colour of food on exposure to heat (cooking) in a large-scale industrial oven [1], [2] and [3]. This system allows products to be optimally cooked for optimum sales, according to customers’ ‘ideal’ aesthetics of various food products. The system utilises reflection spectroscopy within the visible spectrum in the range of 440–750 nm. These spectra are representative of the colour of the product and are grouped into various cooking stages, e.g. raw, light, optimal, dark, burnt, etc., and used to train a classifier that will recognise the spectra when used online in the oven. Previous classification has been done entirely using artificial neural networks [1], [2] and [3]. The learning function utilised was back propagation with momentum. This paper investigates an alternative method, namely k-nearest neighbour (k-NN). The reason behind this investigation is that while neural networks proved very accurate in their classification their implementation can be complex and for this application it makes the addition of new food products to the oven more difficult. In others words, while accurate classification was at the top of the list of critical features, the next most important feature of the classifier was that changes to the oven's food load could be easily implemented. The k-nearest neighbour classifier is a powerful and simple method of classification that has proved successful in many applications. k-NN classifiers have been widely used in medicine [4], face recognition [5], signature recognition [6], [7] and [8] and the food industry [9], [10], [11] and [12]. There have been many investigations into k-NN applied to spectral data [12], some specifically applying principal component analysis (PCA) to the raw spectral data in order to reduce the dimensionality of the problem and to create clusters [11]. The method of PCA is applied to the spectral data of this paper. Comparisons have also been made between neural networks, in particular using backpropagation algorithm, and k-NN as classifiers in the case of handwriting recognition [6], [7] and [8]. In the paper by Drouhard et al. [6] PCA was performed on data generated with directional probability density function and was then classified using both k-NN and back propagation network (BPN) classifiers. In this case both the BPN and k-NN performed equally well. In the paper by Pottier and Burel [8] these classifiers were also compared with the BPN giving an accuracy of 98.1% and the k-NN giving an accuracy of 96.3%. In the paper by Conde et al. [5] a neural network and k-NN classifier were compared in the application of face recognition. In this work principal component analysis was performed on grey scale images to reduce dimensionality and then a radial basis function (RBF) neural network was compared with a k-NN classifier. In this example an accuracy of 96.5% was achieved with k-NN, while the RBF achieved an accuracy of 92.16%. These papers all conclude that the k-NN performs very favourably when measured against the neural networks. A predicted comparison of k-NN versus neural networks for this application is given in Table 1. The most significant advantage of the k-NN classifier is that no training is required for classification. While the k-NN is computationally more resource intensive, with current advances in computers this is not a significant disadvantage. Also PCA ensures that each training pattern contains no redundant information thus significantly reducing the size of the required training set. The main threat to the k-NN classifier is the generalising capability of the neural network, which may result in a less accurate classification by the k-NN classifier. However, there is enough evidence Table 1 to provide the motivation to conduct an experiment to investigate if the simpler method of nearest neighbour classification could compare well with the previously reported neural network [1] and [2]. The principal component method has already been investigated and has been established as an efficient and effective method of feature extraction and dimension reduction [1], therefore using these principal components, a comparison can be made between the k-NN classifier and the back propagation neural network in categorising the various cooking stages of two food products, minced beef burgers and pastry.

From the tests conducted it was discovered that the performance of the neural network classifier proved superior, and that while, for the approximate classification k-NN may be entirely satisfactory and requires very simple computation, if a more intelligent interpretation is required then it is necessary to apply a more advanced technique in signal processing such as artificial neural networks. The performance of each classifier for the classification of each cooking stage in the food products is given in Table 4. This quantitative assessment of the various classifiers’ performance in this application has provided a valuable means for comparing the various techniques. This will provide useful data in assessing the applicability of simplified classification methods such as k-NN to other applications such as restricted food product sets where the requirement for such a high degree of generalisation is not a factor.