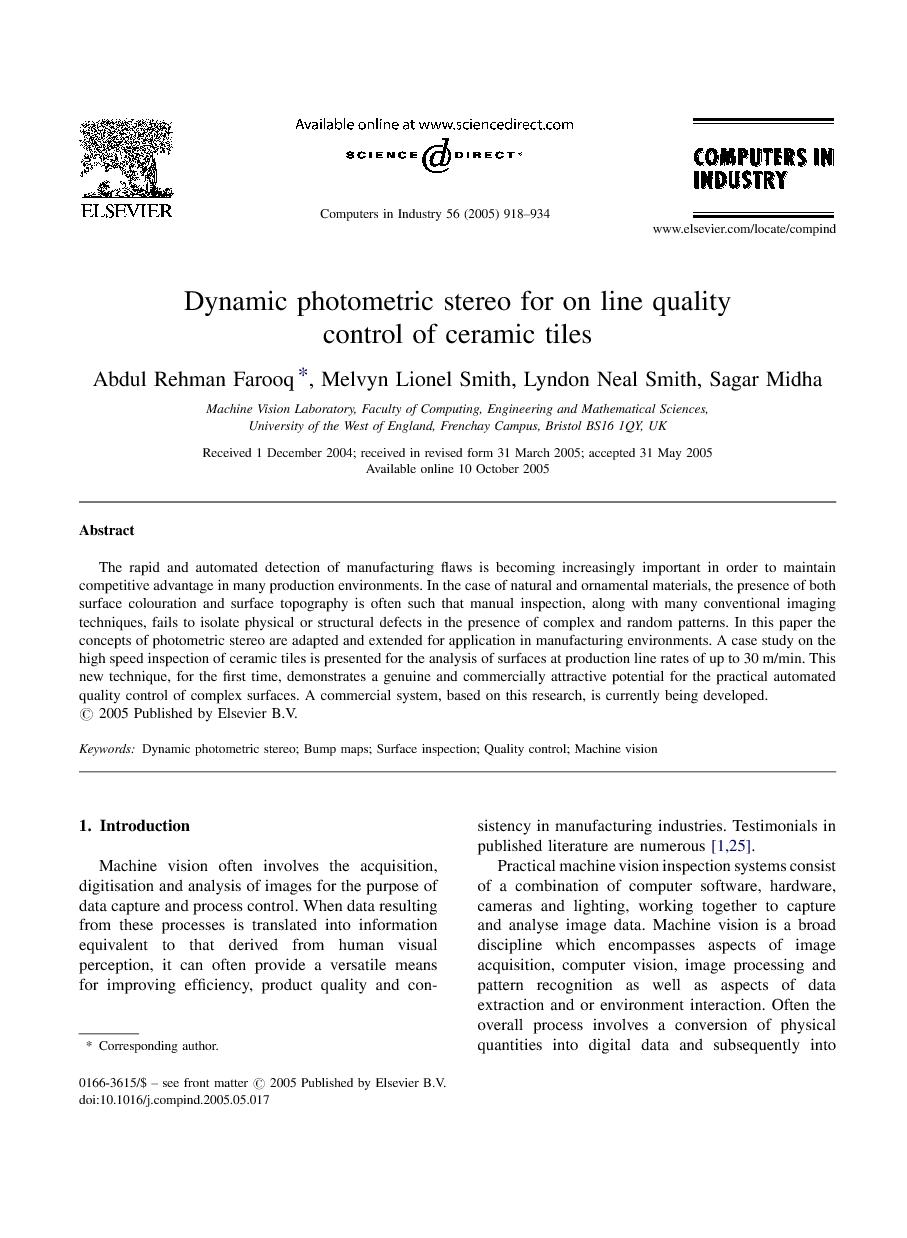 The rapid and automated detection of manufacturing flaws is becoming increasingly important in order to maintain competitive advantage in many production environments. In the case of natural and ornamental materials, the presence of both surface colouration and surface topography is often such that manual inspection, along with many conventional imaging techniques, fails to isolate physical or structural defects in the presence of complex and random patterns. In this paper the concepts of photometric stereo are adapted and extended for application in manufacturing environments. A case study on the high speed inspection of ceramic tiles is presented for the analysis of surfaces at production line rates of up to 30 m/min. This new technique, for the first time, demonstrates a genuine and commercially attractive potential for the practical automated quality control of complex surfaces. A commercial system, based on this research, is currently being developed.

An adaptation of photometric stereo has been presented for the on line analysis of difficult moving surfaces containing complex mixed two- and three-dimensional textures. The new method, spatially multiplexed photometric stereo, was based on projecting light onto separate regions of the inspection plane. Typical example applications are surprisingly common and include the processing of natural materials such as stone, timber, leather and fabrics, where stochastic 2D coloured patterns may be concomitant with 3D topographic textures. Problems also arise when defects such as cracks and scratches may be coincident with colouring defects. Examples include any process where surface topography and reflectance must be controlled and include painted, plated or printed finishes on metal or plastic components, in fact any process where two- and three-dimensional features are simultaneously present. Unfortunately, conventional imaging techniques are unable to reliably distinguish between these kinds of features, often leading to unsatisfactory performance through feature misinterpretation. Photometric stereo has been shown to offer a direct, implicit technique for recovering superimposed surface reflectance and geometrical information in isolation. However, limiting assumption forming the basis of CPS is that differing separate directional illumination configurations must be present in each of the acquired views. While this is readily achieved in the static scenario, either by moving the light sources or by switching on and off differing lights between image acquisition stages, in terms of practical application allowing potential for rapid or uncontrolled relative movement between the camera and the surface, this assumption is found to be the most restrictive. This coupled with the ability to simultaneously acquire images under different lighting configurations that forms the basis of realising the dynamic photometric stereo method. The new method combines the adeptness of photometric stereo for textural analysis with new theoretical mechanisms and practical hardware capable of imaging dynamic surfaces, providing a flexible and generic scanning system for the inspection of moving complex surfaces. Consideration of the geometries and behaviour of industrial lighting was taken into account resulting in equations for irradiance modelling of the line lights. A case study was used to demonstrate a potential area of application. The case study was used to practically simulate the on line inspection of ceramic biscuit tiles. 3D topographic ground truth data was generated for a selection of test tiles with a high precision 3D surface scanning CMM. This data was converted into bump map format and compared directly with data obtained using DPS. The largest average absolute error obtained was ∼2°, which is equivalent to 9 μm per 0.25 mm × 0.25 mm square patch (resolution), at a tile travel speed of 30 m/min. This provides a simple quantitative measure of the accuracy of the new system. It was highlighted how the resulting data from the process could be used to provide interaction with the manufacturing process in order to reduce wastage and improve manufacturing quality. A prototype system is currently being commercially developed.