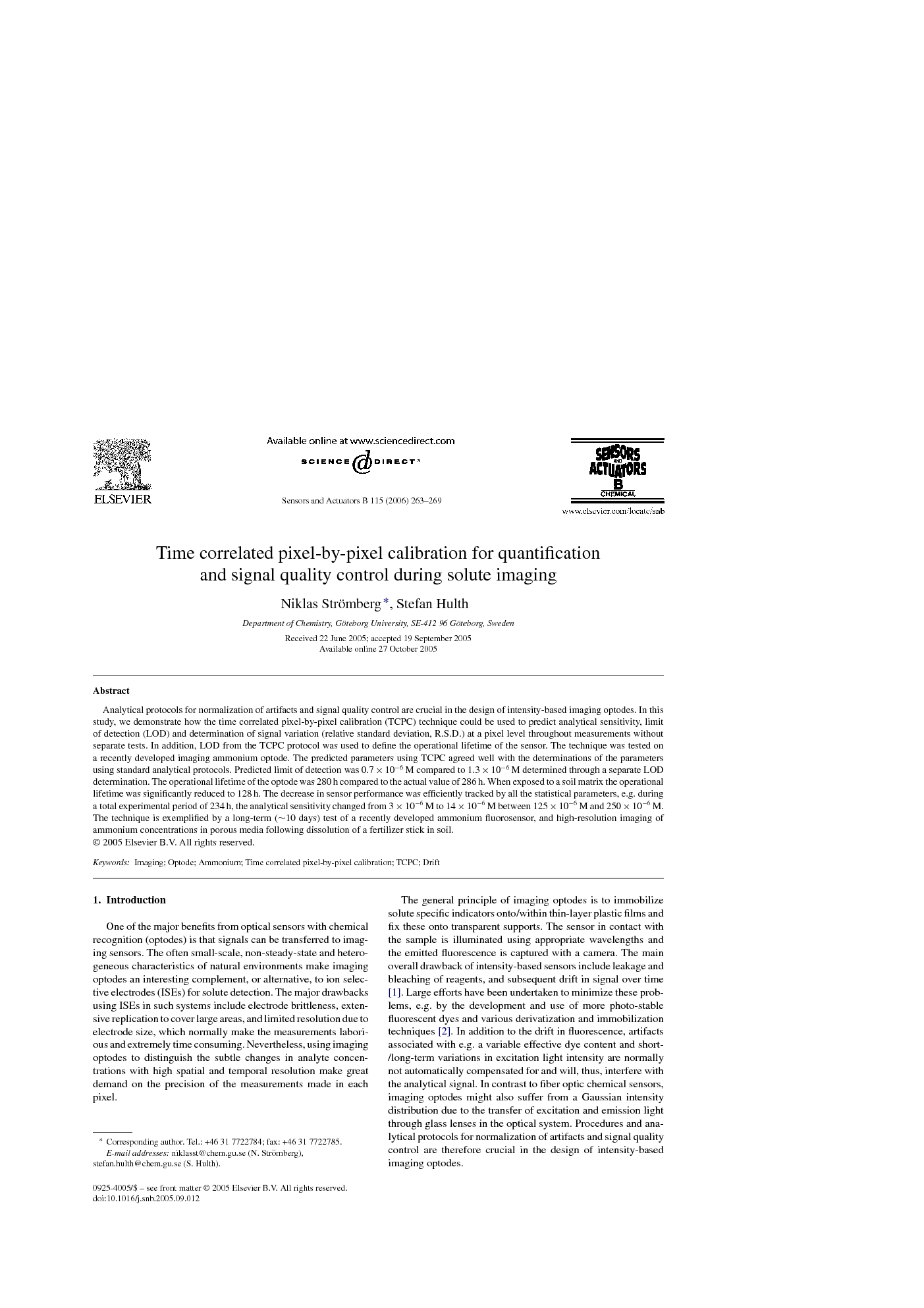 Analytical protocols for normalization of artifacts and signal quality control are crucial in the design of intensity-based imaging optodes. In this study, we demonstrate how the time correlated pixel-by-pixel calibration (TCPC) technique could be used to predict analytical sensitivity, limit of detection (LOD) and determination of signal variation (relative standard deviation, R.S.D.) at a pixel level throughout measurements without separate tests. In addition, LOD from the TCPC protocol was used to define the operational lifetime of the sensor. The technique was tested on a recently developed imaging ammonium optode. The predicted parameters using TCPC agreed well with the determinations of the parameters using standard analytical protocols. Predicted limit of detection was 0.7 × 10−6 M compared to 1.3 × 10−6 M determined through a separate LOD determination. The operational lifetime of the optode was 280 h compared to the actual value of 286 h. When exposed to a soil matrix the operational lifetime was significantly reduced to 128 h. The decrease in sensor performance was efficiently tracked by all the statistical parameters, e.g. during a total experimental period of 234 h, the analytical sensitivity changed from 3 × 10−6 M to 14 × 10−6 M between 125 × 10−6 M and 250 × 10−6 M. The technique is exemplified by a long-term (∼10 days) test of a recently developed ammonium fluorosensor, and high-resolution imaging of ammonium concentrations in porous media following dissolution of a fertilizer stick in soil.

One of the major benefits from optical sensors with chemical recognition (optodes) is that signals can be transferred to imaging sensors. The often small-scale, non-steady-state and heterogeneous characteristics of natural environments make imaging optodes an interesting complement, or alternative, to ion selective electrodes (ISEs) for solute detection. The major drawbacks using ISEs in such systems include electrode brittleness, extensive replication to cover large areas, and limited resolution due to electrode size, which normally make the measurements laborious and extremely time consuming. Nevertheless, using imaging optodes to distinguish the subtle changes in analyte concentrations with high spatial and temporal resolution make great demand on the precision of the measurements made in each pixel. The general principle of imaging optodes is to immobilize solute specific indicators onto/within thin-layer plastic films and fix these onto transparent supports. The sensor in contact with the sample is illuminated using appropriate wavelengths and the emitted fluorescence is captured with a camera. The main overall drawback of intensity-based sensors include leakage and bleaching of reagents, and subsequent drift in signal over time [1]. Large efforts have been undertaken to minimize these problems, e.g. by the development and use of more photo-stable fluorescent dyes and various derivatization and immobilization techniques [2]. In addition to the drift in fluorescence, artifacts associated with e.g. a variable effective dye content and short-/long-term variations in excitation light intensity are normally not automatically compensated for and will, thus, interfere with the analytical signal. In contrast to fiber optic chemical sensors, imaging optodes might also suffer from a Gaussian intensity distribution due to the transfer of excitation and emission light through glass lenses in the optical system. Procedures and analytical protocols for normalization of artifacts and signal quality control are therefore crucial in the design of intensity-based imaging optodes. For imaging devices, flat fielding [3] and pixel-by-pixel calibration [4] are widely used techniques to compensate for uneven illumination and individual pixel sensitivity, as well as for eventual aberrations in the optical system. However, drift in signal due to photo bleaching and dye leakage is normally not compensated for using these techniques. Ratiometric protocols generally compensate for short-term variations in e.g. excitation light intensity and uneven illumination [5], as well as a heterogeneous distribution of the indicator dye [6]. Additionally, it is generally assumed that fluorescent ratiometry will normalize signal drift over time [1]. Commonly, these sensing schemes make use of wavelength ratiometric probes that are specific to the analyte. A versatile alternative to wavelength ratiometric probes is to utilize the wavelength shift following the transfer of a solvent or potential sensitive indicator dye across a hydrophilic/hydrophobic interface when exposed to the analyte [7]. The fluorescence ratio encompasses the fluorescence emitted from dye molecules in either phase. This approach has been successfully used to image trans-membrane potentials of cells, cell organelles, and membrane vesicles [7], [8] and [9]. A ratiometric protocol using the solvent sensitive Merocyanine 540 (MC 540) has recently been developed, tested and thoroughly evaluated for an ammonium [5] fluorosensor. Despite normalization procedures aimed to compensate for the systematic drift during measurements, the sensor was found to encounter drawbacks associated with insufficient long-term stability and sensor drift over time (∼10 days). A similar drift in fluorescence ratio has also been recognized for the wavelength ratiometric calcium probe Indo-1 which drifted more than 15% following only 10 min of illumination [10]. These studies imply that ratiometric approaches not necessarily remove drift over time. In order to circumvent this problem, we previously introduced a time correlated pixel-by-pixel calibration (TCPC) procedure for imaging sensors that more or less completely removed time-dependent drift in response [11]. An additional feature of the used calibration technique was the unique possibility to determine the quality of the signal throughout measurements. The overall objective of this study was to demonstrate how the TCPC technique directly could be used to determine analytical sensitivity, limit of detection (LOD) and relative signal variation (i.e. relative standard deviation, R.S.D.) at a pixel level during measurements. In addition, LOD estimated from the calibration procedure was used to define the operational lifetime of the sensor. High-resolution imaging of ammonium concentrations in porous media following dissolution of a fertilizer stick in soil was used as a representative example of a sensor application including signal quality control of the sensing film.

Statistical parameters such as analytical sensitivity, limit of detection and relative signal variation were directly (automatically calculated through scripts) predicted throughout measurements using the TCPC protocol. The technique was found useful for sensor quality control to highlight low response-areas of the sensor foil and to estimate the smallest change in signal that could be detected at specific times. In addition, the technique facilitated unambiguous determination of the expected operational lifetime of individual sensor foils exposed to a specific matrix without a separate experiment. Evidently, the operational lifetime was found dependent on sample composition as there was a significant difference found in operational lifetime between sensors exposed to solution and soil, respectively. The predicted statistical parameters were most accurately determined using an indirect approach (using the drift in fluorescence ratio) rather than a direct calculation. Fluorescence ratio might drift significantly over time but even if there appears to be no drift in absolute terms, the S/N relation will definitely change over time. Regardless, time correlated pixel-by-pixel calibration provides analytical measures throughout the experiment and the total procedure efficiently removes artifacts as well as absolute drift if present.