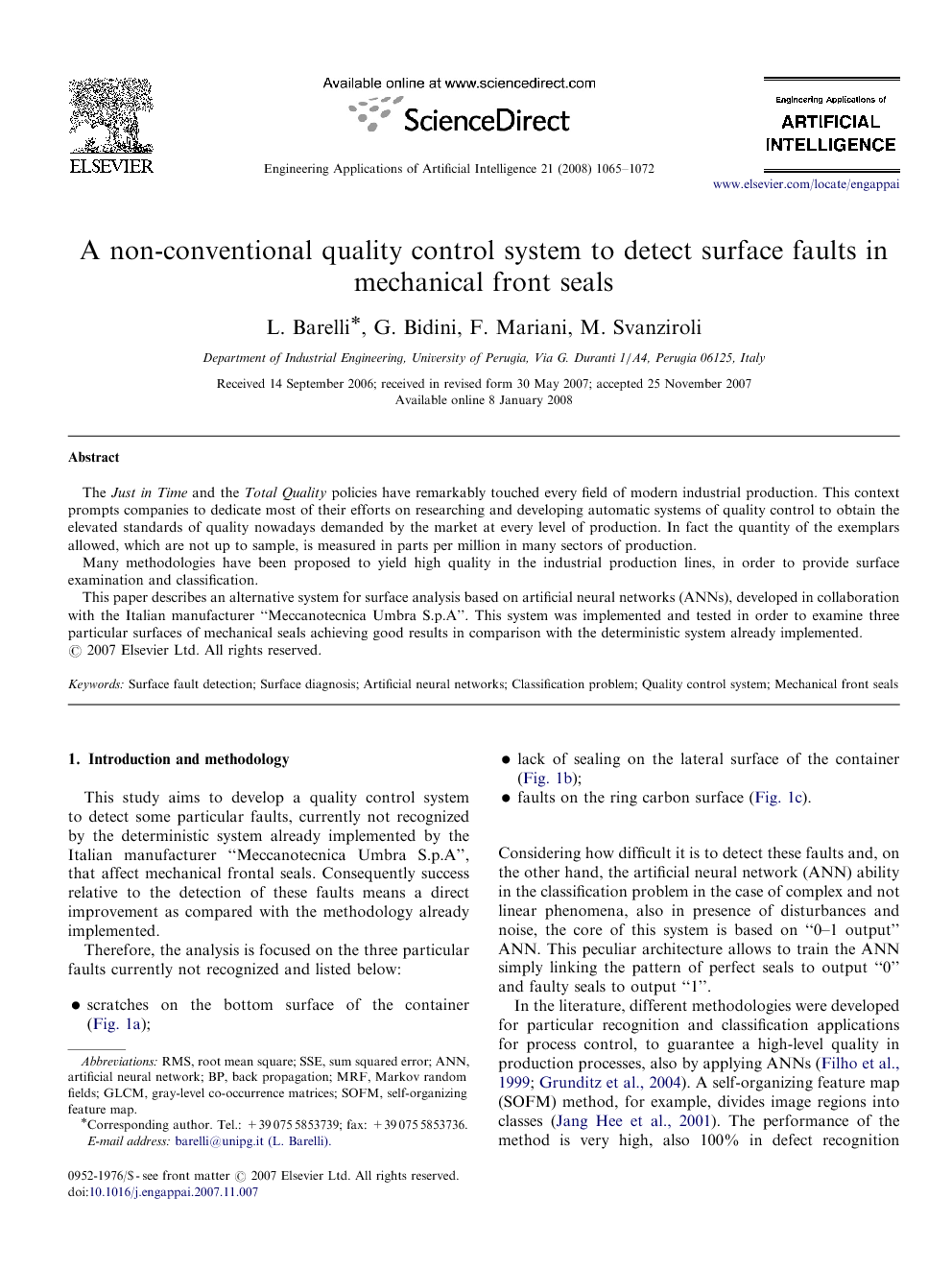 The Just in Time and the Total Quality policies have remarkably touched every field of modern industrial production. This context prompts companies to dedicate most of their efforts on researching and developing automatic systems of quality control to obtain the elevated standards of quality nowadays demanded by the market at every level of production. In fact the quantity of the exemplars allowed, which are not up to sample, is measured in parts per million in many sectors of production. Many methodologies have been proposed to yield high quality in the industrial production lines, in order to provide surface examination and classification. This paper describes an alternative system for surface analysis based on artificial neural networks (ANNs), developed in collaboration with the Italian manufacturer “Meccanotecnica Umbra S.p.A”. This system was implemented and tested in order to examine three particular surfaces of mechanical seals achieving good results in comparison with the deterministic system already implemented.

This study aims to develop a quality control system to detect some particular faults, currently not recognized by the deterministic system already implemented by the Italian manufacturer “Meccanotecnica Umbra S.p.A”, that affect mechanical frontal seals. Consequently success relative to the detection of these faults means a direct improvement as compared with the methodology already implemented. Therefore, the analysis is focused on the three particular faults currently not recognized and listed below: faults on the ring carbon surface (Fig. 1c). Considering how difficult it is to detect these faults and, on the other hand, the artificial neural network (ANN) ability in the classification problem in the case of complex and not linear phenomena, also in presence of disturbances and noise, the core of this system is based on “0–1 output” ANN. This peculiar architecture allows to train the ANN simply linking the pattern of perfect seals to output “0” and faulty seals to output “1”. In the literature, different methodologies were developed for particular recognition and classification applications for process control, to guarantee a high-level quality in production processes, also by applying ANNs (Filho et al., 1999; Grunditz et al., 2004). A self-organizing feature map (SOFM) method, for example, divides image regions into classes (Jang Hee et al., 2001). The performance of the method is very high, also 100% in defect recognition through visual inspection of textile products (Tolba and Abu-Rezeq, 1997), while it slightly drops when extending the problem to classify to the metallic and wooden surfaces categories. Moreover, Neural network classifiers to grade parts based on surface faults with spatial dependencies have been implemented in Schmoldt, 1994. This system is used in order to characterize and to classify faults on wooden surfaces. Other methodologies relates to the Markov random fields (MRF) (Stachowiak et al., 2005), applied also for the classification of the oxidation level of metallic surfaces, assigning each pattern to the respective category according to the nature of the imperfections; while to analyze texture the histograms and gray-level co-occurrence matrices (GLCM) methods are used too (Manish et al., 2004; Palm, 2004; Baykut et al., 2000). Both MRF and GLCM methods yields a correct classification rate greater than 80%. Moreover, the nearest neighbor method is particularly suitable to problems of classification (Godin et al., 2004). Therefore, the originality of this study is not so much in the application of ANN to classification problem for faults detection (or the development of learning algorithm modifications), but to the particular project of the solution, developed in agreement with phenomenon characteristics and constraints. In fact, system performances strictly depend on the parameters and indexes defined to characterize the phenomenon in reference to the faults presence or absence. The system analyzes a restricted area of the mentioned surfaces, because the study just wants to demonstrate the reliability of the approach. Subsequently, an automated system for the mechanical frontal seals movement will be designed to guarantee the repetition of the analysis on all the zones of the component surface. As concerns what discussed above, the first part of the paper illustrates how the digital images are treated and what kind of information is deduced from defective elements along with good ones. Such an image processing procedure must supply the parameters then elaborated by the ANN to evaluate the surface conformity. In order to carry out a supervised training on the basis of the experimental data deduced as detailed above, the authors have chosen the back propagation (BP) algorithm for training in consideration of its significant convergence performances in terms of both solution quality and reduced convergence time for the same error committed in the test. These characteristics have encouraged the authors to not execute a compared analysis of the performances concerning different training algorithms applied to the present case study. Therefore, by applying multilayer feedforward ANNs trained with BP algorithm, different network architectures have been tested to find the best configuration in terms of performances and quality of the solutions produced. The results supplied by the ANN are compared with suitable threshold values, defined for each fault typology, which discriminate the cases of faulty seal and not-faulty seal. The performances of the neural system have been finally verified also with noising images, in order to estimate the sensitivity of the system according to the quality of the acquired images. It must be noted that all the images used in the analysis were acquired by a common camera and not by means of a suitable vision system. Thus, also the quality of the original images is not very high and noise introduction was performed only for further sensitivity analysis of system performances.

Applied to all classes of analyzed defects, the implemented method achieves high level of accuracy for not-high quality input images and also in the case of supplementary low-level noise introduction. In fact, as seen in the previous paragraphs, the neural classifier, applied to the three defects (lack of seal, scratches on the metal surface and carbon ring defects), is able to separate 100% of faulty elements from the good ones. One more important aspect to underline is that, once the system has been trained, you have only one parameter to set up: the threshold of separation. This means that little time is needed to suit the system according to user's needs. In fact, if the user wants to change the selectivity of the system, only one parameter must be tuned; this characteristic makes this method truly user-friendly. As the efficiency of the method is proved, the step to take is to re-edit the software in a different ambient of development (such as C++) and to optimize it. The goal is to reduce the processing time as much as possible to line it up to the production time and test the method directly on-line.