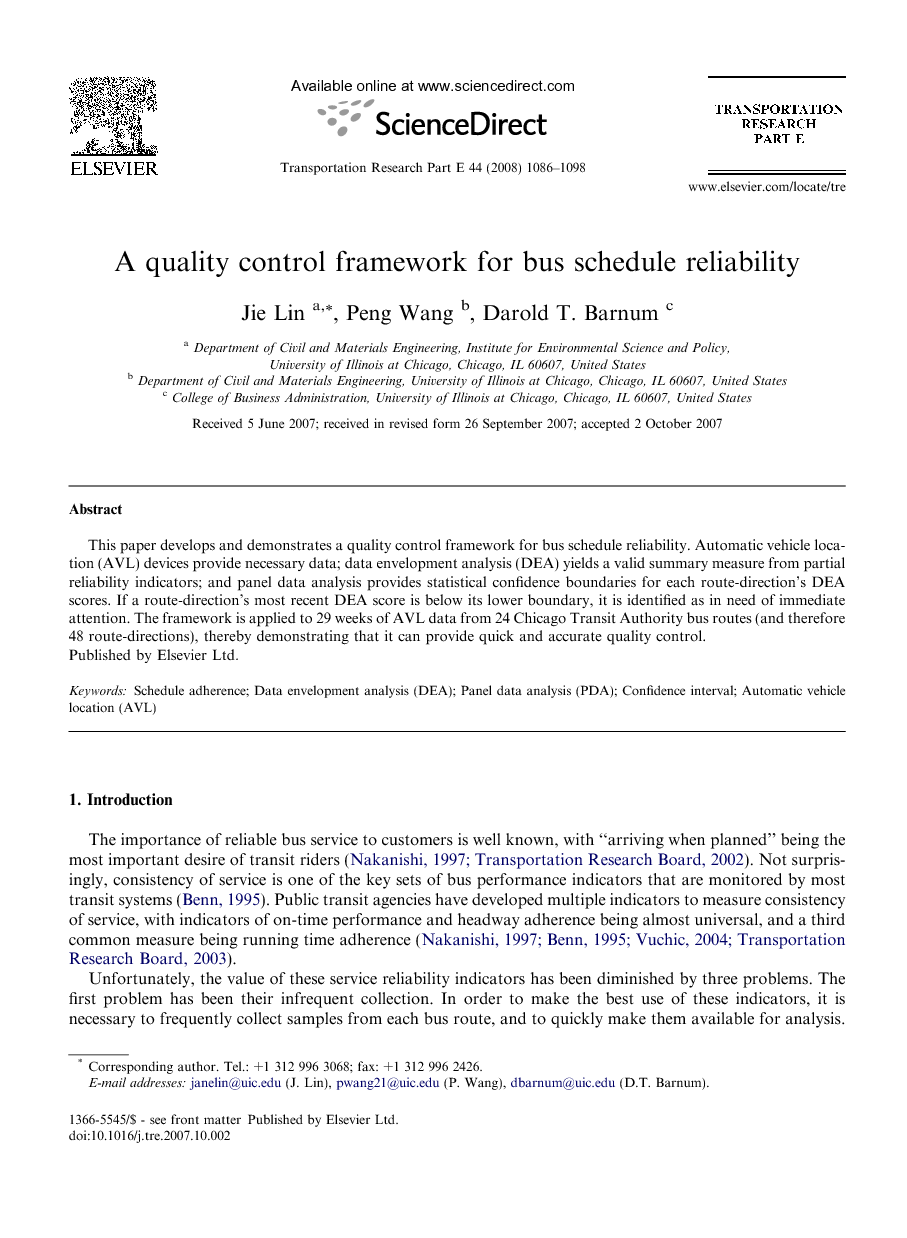 This paper develops and demonstrates a quality control framework for bus schedule reliability. Automatic vehicle location (AVL) devices provide necessary data; data envelopment analysis (DEA) yields a valid summary measure from partial reliability indicators; and panel data analysis provides statistical confidence boundaries for each route-direction’s DEA scores. If a route-direction’s most recent DEA score is below its lower boundary, it is identified as in need of immediate attention. The framework is applied to 29 weeks of AVL data from 24 Chicago Transit Authority bus routes (and therefore 48 route-directions), thereby demonstrating that it can provide quick and accurate quality control.

This study presented a Panel DEA framework for evaluating bus schedule adherence performance. The proposed framework was demonstrated with a case study using 24 CTA bus routes for a 29-week period between January and June 2006. The bus schedule adherence performance indicators, namely running time adherence and headway regularity, were derived from CTA’s archived bus AVL data. Compared to assessing bus schedule adherence based on partial performance indicators historically used by transit agencies, the Panel DEA-based framework demonstrates clear superiority in terms of providing a comprehensive performance measure that identifies problems quickly and accurately. The contributions of the paper to the transit literature are four-fold. First, this paper has demonstrated a new application of AVL data for transit operations. Because AVL data is continuously collected and quickly available, management can use the information to promptly address service reliability problems. Moreover, trend analysis and panel data analysis become practical when AVL data are available. Second, this paper presents a mathematically and economically plausible method to construct a comprehensive measure of service reliability from multiple partial reliability indicators, by using DEA. This DEA indicator is put into even better use than those in all past transit DEA studies because it not only identifies the benchmark DMUs but also prioritizes those in need of attention. Prior transit DEA studies have usually addressed the former but not the latter. In addition, the DEA indicator developed herein is a pure effectiveness measure in that it utilizes only outputs, instead of a ratio of outputs to inputs that have been employed in all past transit DEA studies. It is likely that there are other transit goals that could be best measured by considering only outputs rather than output–input ratios. Third, by coupling PDA with DEA, it has been demonstrated in this paper that the traditional deterministic DEA can be extended to stochastic DEA and thus statistical inferences can be made. This is the second application of Panel DEA to transit and the first to apply the methodology to performance evaluation of a transit agency’s subunits. Unlike all previous transit DEA papers, this paper is built upon the concept of quality control, realized by comparing each DMU’s current performance level to a statistical confidence interval based on its past performance. Lastly, this paper is among the first that have extended the use of DEA from the traditional comparisons among transit organizations to performance assessment of organizational subunits performing parallel activities. Nonetheless, there are limitations in this study that require further research. It is recognized that the four on-time performance indicators used in this study do not reflect every aspect of bus service reliability. For example, no measure of passenger related activity was considered. Nor have measures of traffic conditions or environmental factors been taken into consideration. The running time and headway based indicators were adopted mainly because they have been used by transit agencies (e.g., CTA) and they were readily derived from the archived AVL data. Some of the other measures may be derived from the bus automatic passenger count (APC) data; others may require different data sources such as traffic sensor data. The real-time AVL data is another source of data, which contain travel speed information. With more advanced data collection technologies available in public transportation systems, the framework presented in the paper should readily apply. Future research is also needed to identify causes for poor bus schedule reliability. This is outside the scope of this paper but no-doubt a close-to-the-heart issue to transit managers. Panel DEA tells which routes demand immediate attention; however, it does not identify the causes of the problems. Continuous research effort in the area is desired and will surely elevate the value of the research even further.