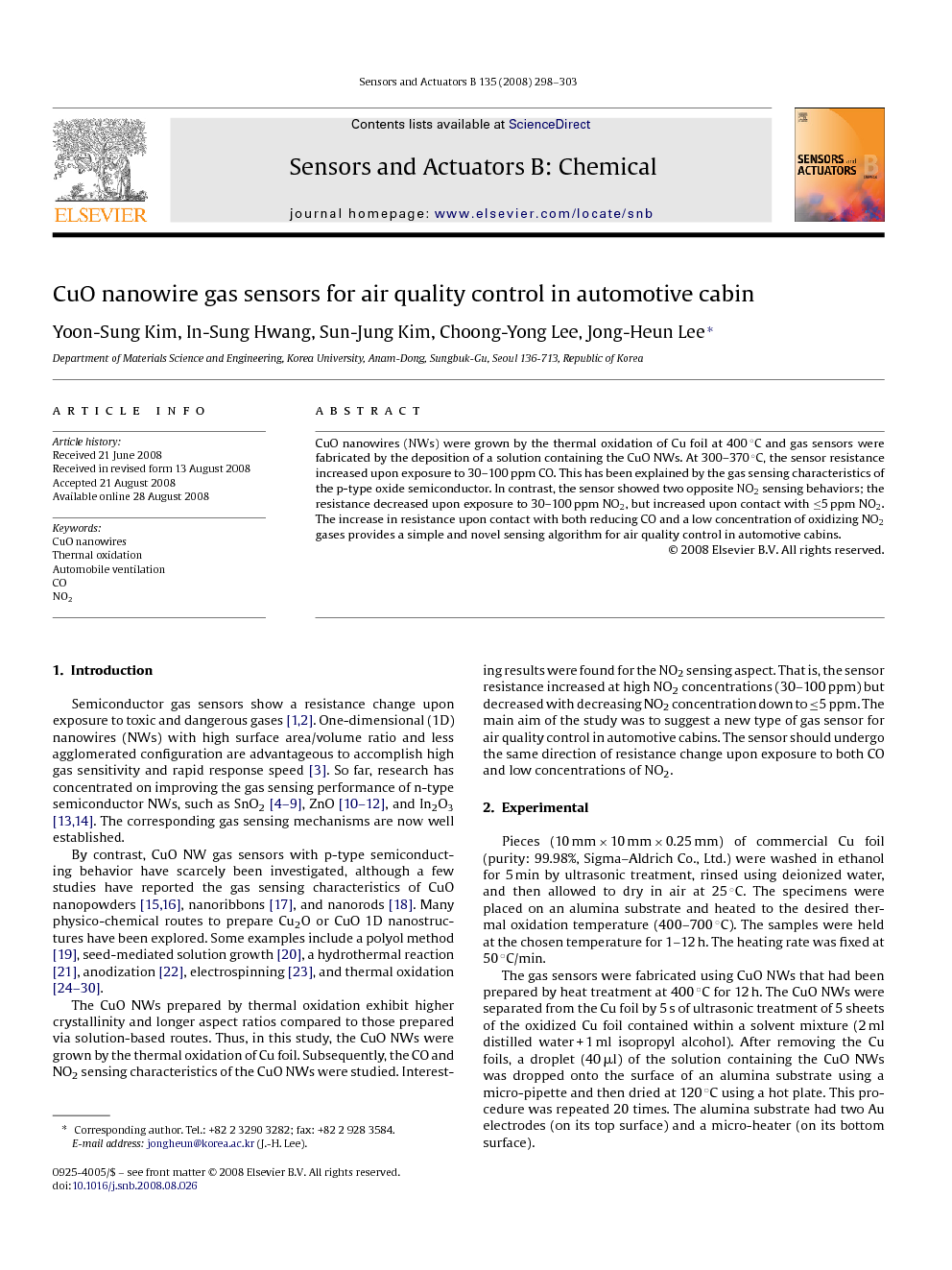 CuO nanowires (NWs) were grown by the thermal oxidation of Cu foil at 400 °C and gas sensors were fabricated by the deposition of a solution containing the CuO NWs. At 300–370 °C, the sensor resistance increased upon exposure to 30–100 ppm CO. This has been explained by the gas sensing characteristics of the p-type oxide semiconductor. In contrast, the sensor showed two opposite NO2 sensing behaviors; the resistance decreased upon exposure to 30–100 ppm NO2, but increased upon contact with ≤5 ppm NO2. The increase in resistance upon contact with both reducing CO and a low concentration of oxidizing NO2 gases provides a simple and novel sensing algorithm for air quality control in automotive cabins.

Semiconductor gas sensors show a resistance change upon exposure to toxic and dangerous gases [1] and [2]. One-dimensional (1D) nanowires (NWs) with high surface area/volume ratio and less agglomerated configuration are advantageous to accomplish high gas sensitivity and rapid response speed [3]. So far, research has concentrated on improving the gas sensing performance of n-type semiconductor NWs, such as SnO2[4], [5], [6], [7], [8] and [9], ZnO [10], [11] and [12], and In2O3[13] and [14]. The corresponding gas sensing mechanisms are now well established. By contrast, CuO NW gas sensors with p-type semiconducting behavior have scarcely been investigated, although a few studies have reported the gas sensing characteristics of CuO nanopowders [15] and [16], nanoribbons [17], and nanorods [18]. Many physico-chemical routes to prepare Cu2O or CuO 1D nanostructures have been explored. Some examples include a polyol method [19], seed-mediated solution growth [20], a hydrothermal reaction [21], anodization [22], electrospinning [23], and thermal oxidation [24], [25], [26], [27], [28], [29] and [30]. The CuO NWs prepared by thermal oxidation exhibit higher crystallinity and longer aspect ratios compared to those prepared via solution-based routes. Thus, in this study, the CuO NWs were grown by the thermal oxidation of Cu foil. Subsequently, the CO and NO2 sensing characteristics of the CuO NWs were studied. Interesting results were found for the NO2 sensing aspect. That is, the sensor resistance increased at high NO2 concentrations (30–100 ppm) but decreased with decreasing NO2 concentration down to ≤5 ppm. The main aim of the study was to suggest a new type of gas sensor for air quality control in automotive cabins. The sensor should undergo the same direction of resistance change upon exposure to both CO and low concentrations of NO2.

CuO nanowire (NW) gas sensors were fabricated by the thermal oxidation of Cu foil and the coating of the CuO NWs on the electrode using a solution deposition technique. The resistance of the CuO NW sensor increased upon exposure to 10–100 ppm CO at 300–370 °C. By contrast, the NO2 sensing characteristics were not simple and varied according to the NO2 concentration. The resistance decreased upon exposure to 30–100 ppm NO2 but increased upon contact with ≤5 ppm NO2. This indicates that the interaction between the NO2 and the surface oxygen changes with decreasing NO2 concentration. The ability of this single gas sensor to increase its resistance upon contact with CO and ≤5 ppm NO2 provides a novel and simple method for detecting the pollutant gases emitted from gasoline and diesel engines.