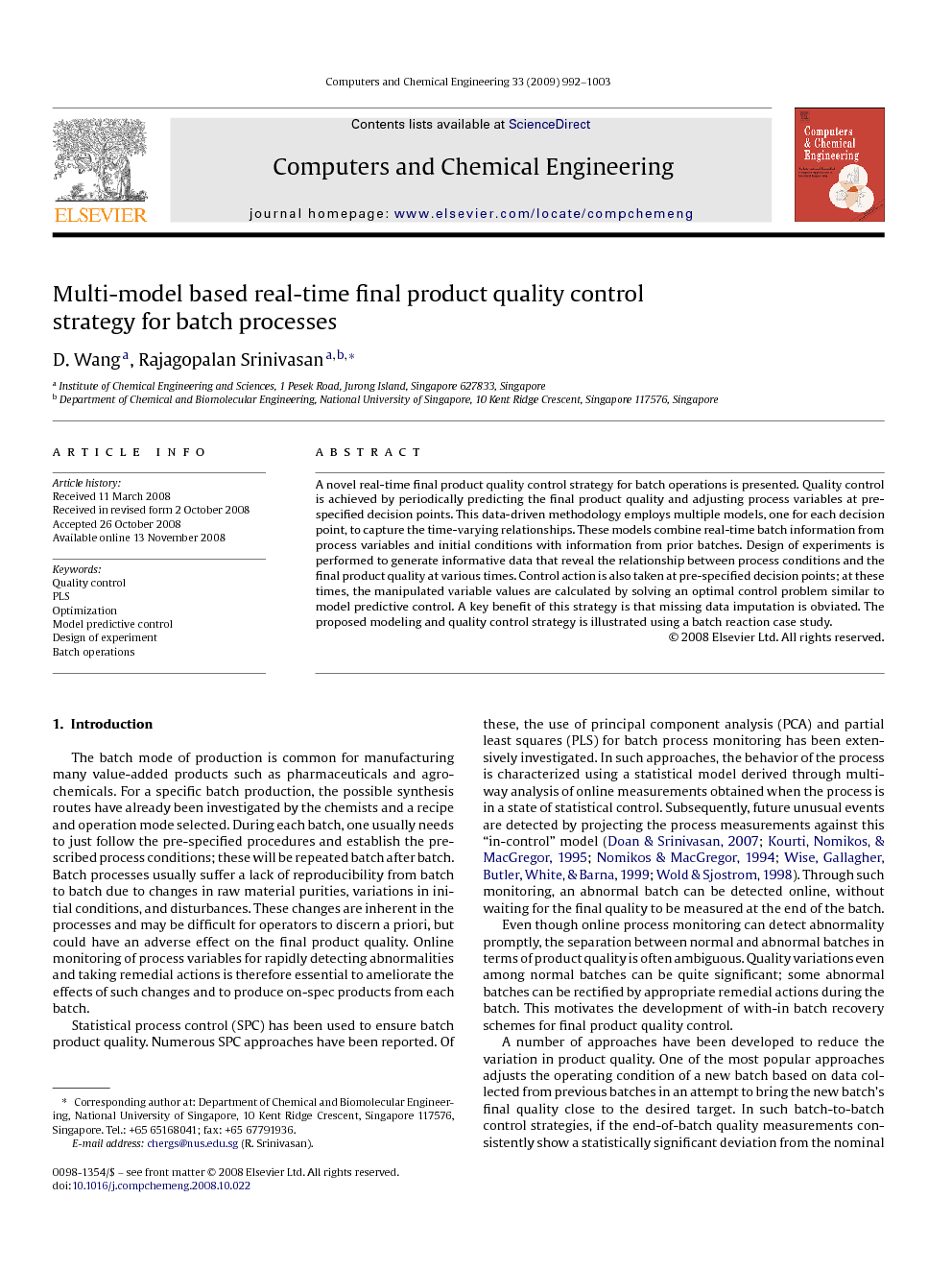 A novel real-time final product quality control strategy for batch operations is presented. Quality control is achieved by periodically predicting the final product quality and adjusting process variables at pre-specified decision points. This data-driven methodology employs multiple models, one for each decision point, to capture the time-varying relationships. These models combine real-time batch information from process variables and initial conditions with information from prior batches. Design of experiments is performed to generate informative data that reveal the relationship between process conditions and the final product quality at various times. Control action is also taken at pre-specified decision points; at these times, the manipulated variable values are calculated by solving an optimal control problem similar to model predictive control. A key benefit of this strategy is that missing data imputation is obviated. The proposed modeling and quality control strategy is illustrated using a batch reaction case study.

A novel multi-model based real-time batch quality control strategy for batch/semi-batch processes has been proposed. The proposed multi-model structure steers the end-of-batch quality by prediction and control only at pre-selected decision points rather than at every sample. A different model is used for prediction and control at each decision point—this serves as an easy, yet adequate means to predict final quality during process evolution. It also obviates the need to account explicitly for discontinuities, nonlinearities, and future actions. Real-time control of quality is obtained from an online control optimization that is similar to MPC. This optimization-based control scheme ensures that the calculated changes in process variable trajectories are feasible. The proposed scheme offers several advantages. Foremost is its simplicity that eliminates any explicit consideration of the future evolution and differences in batch duration. Most online batch supervision approaches require imputation of the values of future measurements that will affect the final product quality. They also resort to an explicit method for synchronizing batches of different lengths, which comes with concomitant complexities. The proposed scheme precludes these. In contrast to other strategies, the proposed approach does not need all variables to be available at all decision points since different models are used at each point. Hence, only data (for example lab measurements) which would be available at that juncture has to be incorporated thus obviating the missing data imputation step that would have been essential if a single model was used for the entire batch. The proposed approach is generic and can be applied to any batch process. Even though a linear PLS model has been used here, the proposed multi-model strategy is not limited to this type of model—other model structures such as nonlinear PLS or artificial neural networks (Srinivasan, Wang, Ho, & Lim, 2005) can be employed as well, if necessary. Dynamic models that account for time lag in predictor can also be used if they offer a better representation of the underlying dynamics during a phase (Doan et al., 2007; Srinivasan, Wang, Ho, & Lim, 2004). Further, the proposed scheme bootstraps on the extensive literature on model predictive control, especially for controller design, tuning and manipulated variable computation. These benefits originate from the relaxation of control frequency—from once every sample to once every decision point. The suitable choice of decision points does play a key role. However, decision points can be specified not only in the form of samples (i.e., time-events) but also through state-events such as the values of indicator variables. We will illustrate these avenues offered by the proposed strategy in future communications. Our future work will also develop techniques for refinement of model through a batch-to-batch parameter adaptation strategy.