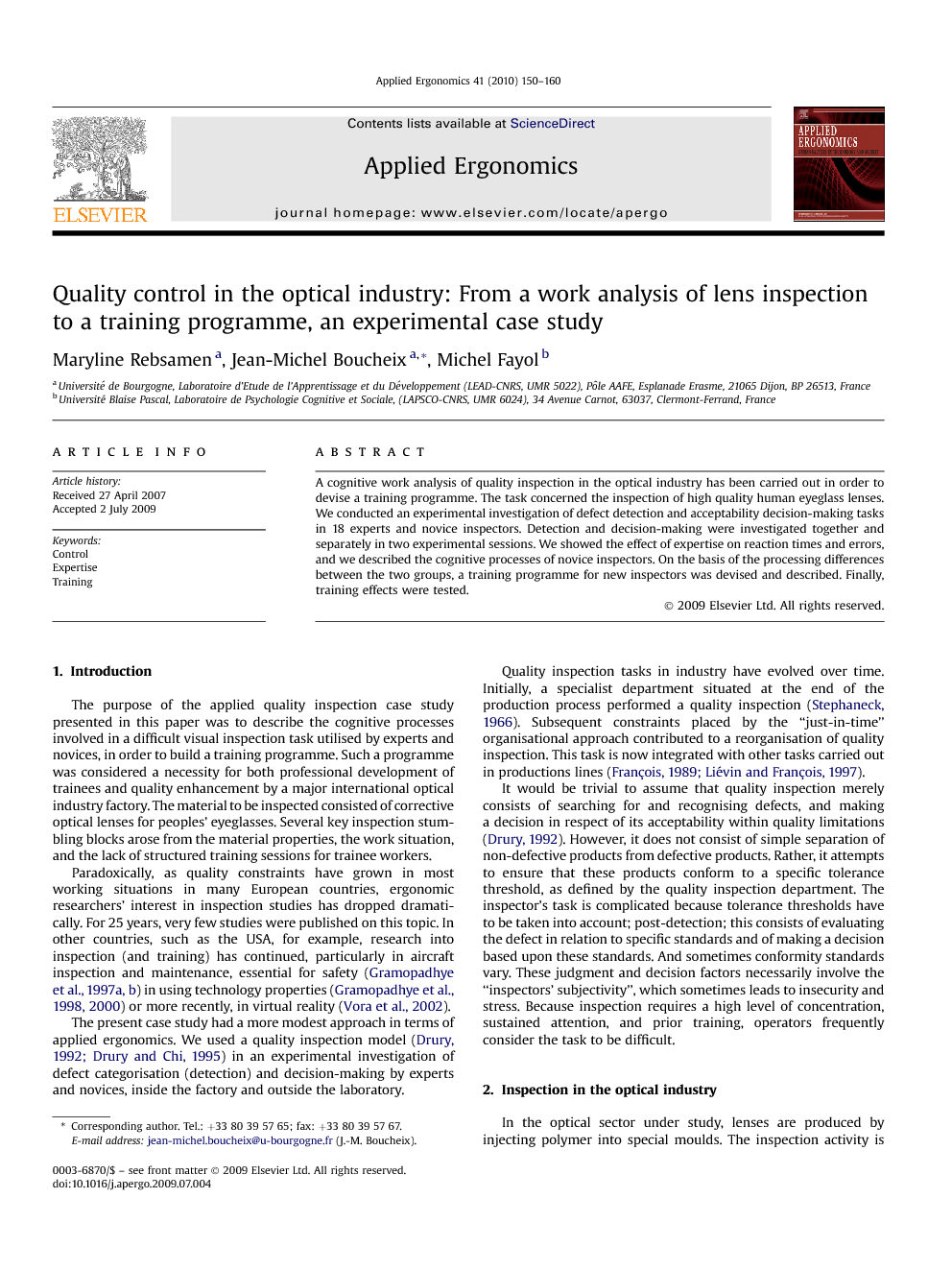 A cognitive work analysis of quality inspection in the optical industry has been carried out in order to devise a training programme. The task concerned the inspection of high quality human eyeglass lenses. We conducted an experimental investigation of defect detection and acceptability decision-making tasks in 18 experts and novice inspectors. Detection and decision-making were investigated together and separately in two experimental sessions. We showed the effect of expertise on reaction times and errors, and we described the cognitive processes of novice inspectors. On the basis of the processing differences between the two groups, a training programme for new inspectors was devised and described. Finally, training effects were tested.

The purpose of the applied quality inspection case study presented in this paper was to describe the cognitive processes involved in a difficult visual inspection task utilised by experts and novices, in order to build a training programme. Such a programme was considered a necessity for both professional development of trainees and quality enhancement by a major international optical industry factory. The material to be inspected consisted of corrective optical lenses for peoples' eyeglasses. Several key inspection stumbling blocks arose from the material properties, the work situation, and the lack of structured training sessions for trainee workers. Paradoxically, as quality constraints have grown in most working situations in many European countries, ergonomic researchers' interest in inspection studies has dropped dramatically. For 25 years, very few studies were published on this topic. In other countries, such as the USA, for example, research into inspection (and training) has continued, particularly in aircraft inspection and maintenance, essential for safety (Gramopadhye et al., 1997a and Gramopadhye et al., 1997b) in using technology properties (Gramopadhye et al., 1998 and Gramopadhye et al., 2000) or more recently, in virtual reality (Vora et al., 2002). The present case study had a more modest approach in terms of applied ergonomics. We used a quality inspection model (Drury, 1992 and Drury and Chi, 1995) in an experimental investigation of defect categorisation (detection) and decision-making by experts and novices, inside the factory and outside the laboratory. Quality inspection tasks in industry have evolved over time. Initially, a specialist department situated at the end of the production process performed a quality inspection (Stephaneck, 1966). Subsequent constraints placed by the “just-in-time” organisational approach contributed to a reorganisation of quality inspection. This task is now integrated with other tasks carried out in productions lines (François, 1989 and Liévin and François, 1997). It would be trivial to assume that quality inspection merely consists of searching for and recognising defects, and making a decision in respect of its acceptability within quality limitations (Drury, 1992). However, it does not consist of simple separation of non-defective products from defective products. Rather, it attempts to ensure that these products conform to a specific tolerance threshold, as defined by the quality inspection department. The inspector's task is complicated because tolerance thresholds have to be taken into account; post-detection; this consists of evaluating the defect in relation to specific standards and of making a decision based upon these standards. And sometimes conformity standards vary. These judgment and decision factors necessarily involve the “inspectors' subjectivity”, which sometimes leads to insecurity and stress. Because inspection requires a high level of concentration, sustained attention, and prior training, operators frequently consider the task to be difficult.

In this concluding section, we will firstly summarise and discuss the main results of this research; and secondly we will describe how we built the training programme which followed this applied case study. We will also briefly summarise the main results of the training programme. Using the model employed by Drury, 1975 and Spitz and Drury, 1978 we checked that, for this case study with lens materials, the two well-known processing stages during the inspection activity were sequential. Since the mean inspection time was 9.6 s and the mean detection time 5.84 s, it may thus be deduced that a mean value of 3.76 s is necessary to make a decision after detection of a defect. This result confirms a sequential model. Results from response time revealed that expert inspectors took less time to provide an exact response than the less experienced inspectors. From good and bad answers, it appeared that expert inspectors have a precise memory representation of what constitutes a normal lens configuration, with the end result that they are no longer able to process good lenses, even if they are explicitly asked to do so. No doubt this ability to restrict information processing to pertinent information, merely for the sake of the task's efficiency, is based on the superiority of the experts' performance. Thus, it is a matter of maximum adaptation to the task constraints, since inspectors are subject to time constraints in actual working conditions. So, it seems that what is acquired with experience is the ability to recognise normal and abnormal configurations and to process only the latter, without losing any time on the former. In the case studied here, even when defects were uncovered, decision-making, which implied using precise updated knowledge about contextualized acceptance standards, could remain very difficult for both groups. Results from Signal Detection Theory analysis brought interesting data about the difference between experts and non-experts regarding the tasks of detection and decision-making. We found differences in d′ between the experts and the novices. This result implies that the experts have indeed improved their ability to search lenses through practice. However, we cannot exclude the fact that experts might have been self-selected. If we consider the former alternative as the most parsimonious3, then we have a good basis for training their search of defects on lenses. This search and detection training in novices could be improved by first acquiring more specific representations of the categories of defects, and precise memory representation of what constitutes a normal lens configuration. We found also an important difference in β between experts and novices, in the inspection task; which indicate that novices are not yet good at decisions. The reason is that they seem too cautious in comparison with experts. This result also fits well with the fact that error rates for GAD lenses, in the inspection, were higher in the non-expert group than in the expert group. For BLD lenses, fewer errors were produced in the detection test than in the inspection test. This result obtained for ambiguous lenses, showed that detection could be easier than full judgment, which implied precise updated knowledge and strict application of acceptability standards. The main feature of acceptability standards is the intensity of the defect. This feature seems to be more critical that the zone where the defect is situated, because a zonal chart is always (and quickly) available in the workplace. There is no such tool for intensity. Decision training in novices could be improved by updating knowledge of acceptability standards. This implies learning intensity of defects. On the basis of these conclusions, deriving from the experimental work analysis, we designed a training method and programme. The first goal of inspection training, more directly related to the detection phase, should be to improve the acquisition of precise representations of the categories of defects and of what constitutes a normal lens. The second goal, which is more related to decision phase, should be to provide specific knowledge about acceptability standards and particularly intensities of defects. The training programme which is presented below consisted of two experimental learning stages in a simulated situation (with a real, full scale, workstation) and one control-training stage in a real working situation. The first two stages were experiments designed to check respectively, the effect of the acquisition of representations of categories on detection and the effect of learning intensity standards on decisions. The last stage was real work training for new trainee inspectors, attending for real working place situation. All three phases were also conducted as applied experiments from which we registered quantitative (reaction times and errors) and qualitative data. In the following section, we will present the main issues and results of the learning programme.