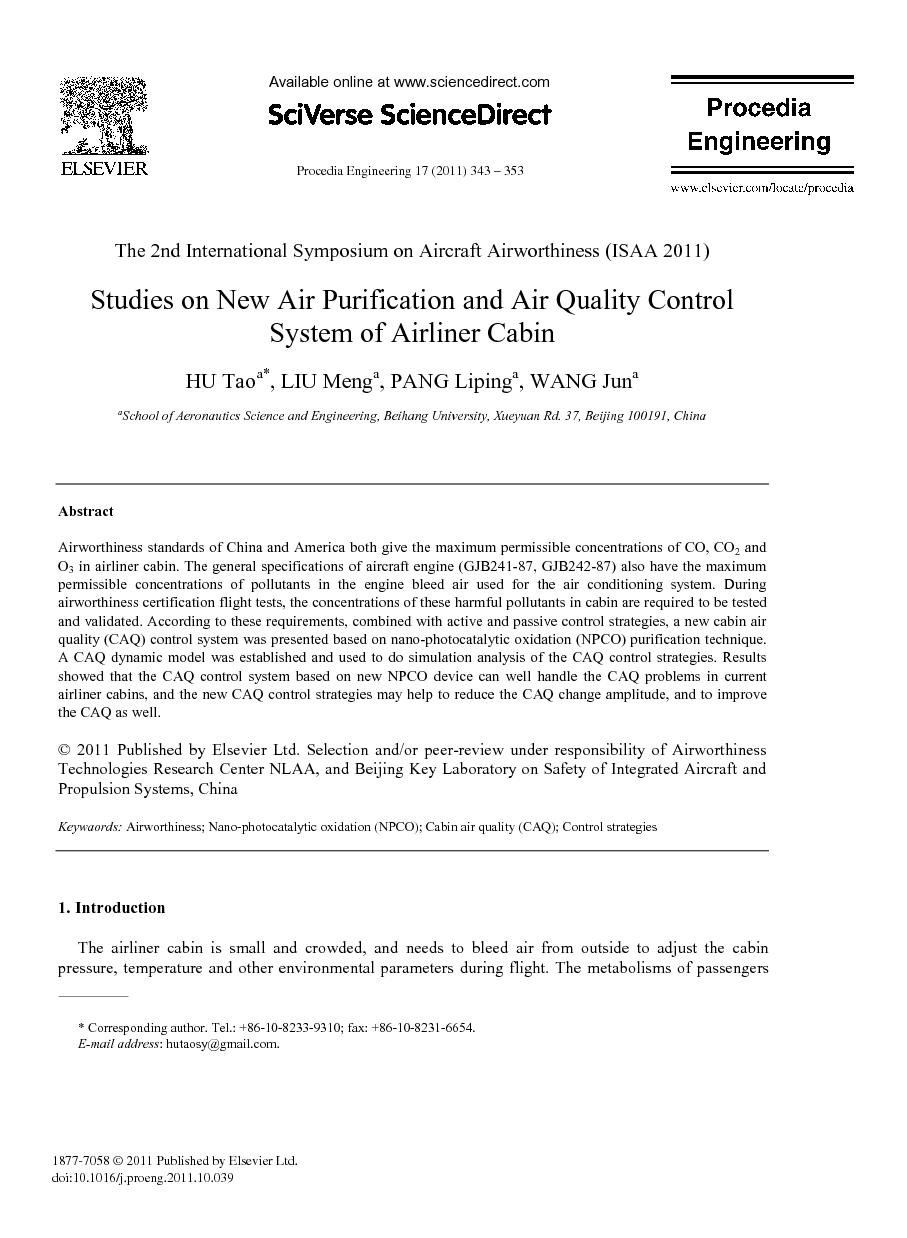 Airworthiness standards of China and America both give the maximum permissible concentrations of CO, CO2 and O3 in airliner cabin. The general specifications of aircraft engine (GJB241-87, GJB242-87) also have the maximum permissible concentrations of pollutants in the engine bleed air used for the air conditioning system. During airworthiness certification flight tests, the concentrations of these harmful pollutants in cabin are required to be tested and validated. According to these requirements, combined with active and passive control strategies, a new cabin air quality (CAQ) control system was presented based on nano-photocatalytic oxidation (NPCO) purification technique. A CAQ dynamic model was established and used to do simulation analysis of the CAQ control strategies. Results showed that the CAQ control system based on new NPCO device can well handle the CAQ problems in current airliner cabins, and the new CAQ control strategies may help to reduce the CAQ change amplitude, and to improve the CAQ as well.

The airliner cabin is small and crowded, and needs to bleed air from outside to adjust the cabin pressure, temperature and other environmental parameters during flight. The metabolisms of passengers and crews, equipment operation, material release, and the bled air from external environment, make the composition of cabin air very complicated. Besides the external atmosphere components, the cabin air also contains inorganic and organic contaminants. According to statistic reports, the passengers and crews have long complained the air quality problems of airliners which have caused fatigue, dizziness, headache, ear disease, eye dryness, throat pain, and occasionally nervous system disorder even loss [1]. To save energy, the future airliners will require a higher cabin air recycling rate, which may make the CAQ problems even worse [2]. Airliner CAQ directly relates to the health, comfort and safety of the crews and passengers. Light pollution of cabin air can reduce the crew working efficiency, and heavy one may lead to destructive accident. Consequently, during the flight, it has an important practical significance to keep the man-made environment of cabin clean and comfortable [3]. Currently, the dispositions of harmful substances in cabin air are usually dilution by fresh air bled from outside, using high efficiency particulate air (HEPA) filters, ozone converter and activated carbon (AC)adsorption units. HEPA filters can not effectively remove organic contaminants, and their airflowresistance is large; AC unit volume is relatively large which is not suitable for aircraft with very limited space, and it has regeneration and other problems. All of these problems require introducing a new air quality control technology to solve.NPCO technology is developed in 1970s as a new air pollution control technology, and has caused much attention due to its high efficiency, small size, and wide range of applications.Concerning the existing cabin air quality problems, a new cabin air purification system was presented based on NPCO technique. Combined with active and passive control strategies, a new cabin air quality (CAQ) control method was introduced for this system. And finally, the CAQ control system was modeled and simulation analyzed.

Cabin air quality (CAQ) of airliner is directly related to the safety, health and comfort of passengers and crew members. Concerning the problems of current CAQ control system, a high efficient NPCOpurification device has been introduced to replace the general HEPA/AC unit. Compared with HEPA/ACunit, the new NPCO purification device has low pressure drop, low life cycle cost, low volume and weight; they can not only clear the volatile organic contaminants (VOCs) in the cabin, but also kill bacteria and viruses in the cabin air, which can help to reduce the amount of fresh air supplied to the cabin in order to save energy and improve the competitiveness of the airliners. A new CAQ control technology combined with active and passive control methods has been presented. The dynamic characteristics model of CAQ has been established using lumped parameter method, and it has been applied to conduct CAQ simulation studies.Simulation results show that the new control technology can effectively solvethe current CAQproblems. The NPCO device, used as the passive controller, shows an important effect on restraining the pollutant concentration change magnitude and shortening the duration of the transition process. The active control strategy that the cabin CO concentration is controlled by changing the fan speed to adjust the air 2 recirculation rate performs very well with characteristics of simpleness, rapidity and stabilization.