عنوان انگلیسی
Quality control and due diligence in project management: Getting decisions right by taking the outside view ☆
دانلود فوری مقاله + سفارش ترجمه 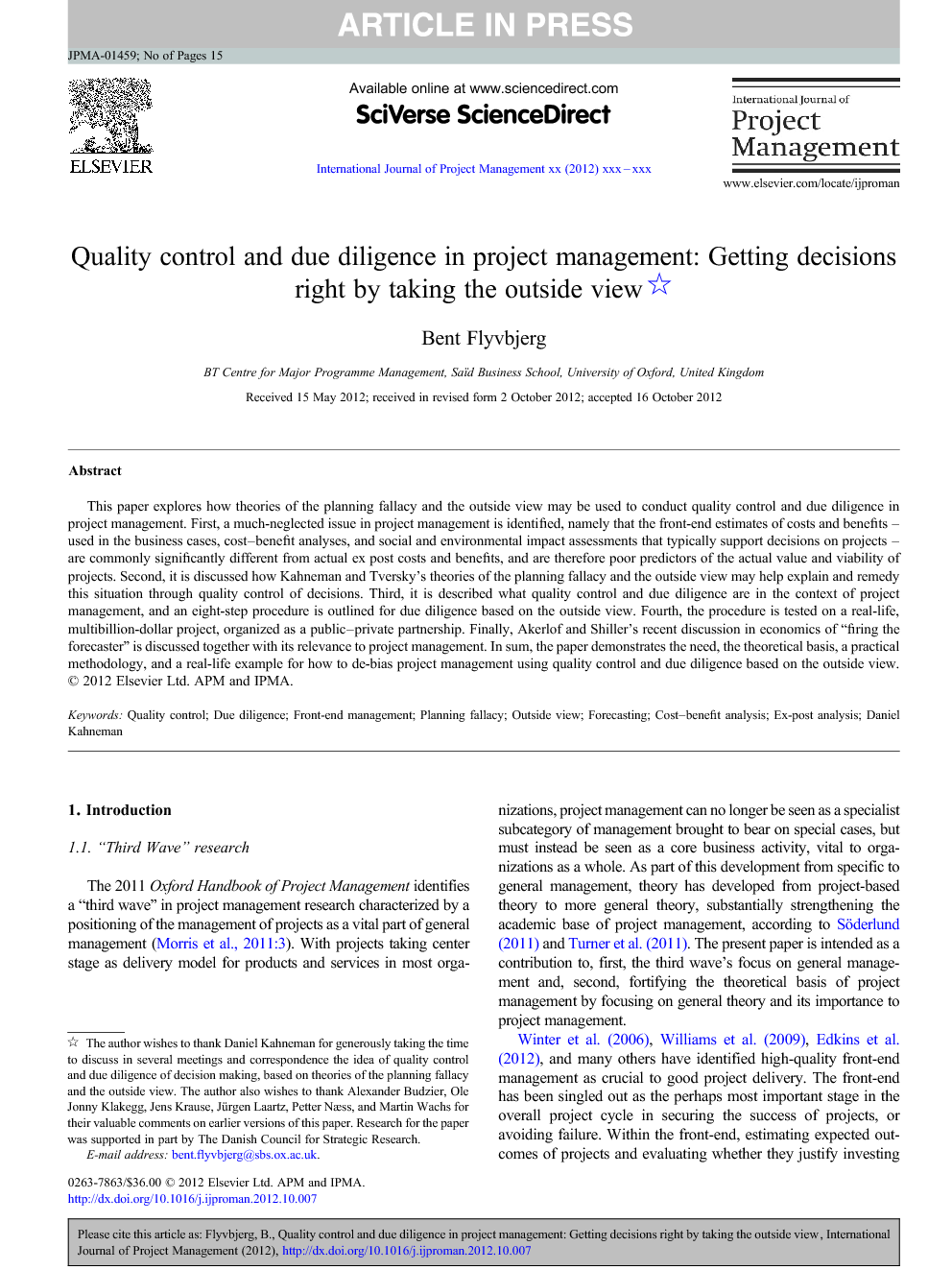 This paper explores how theories of the planning fallacy and the outside view may be used to conduct quality control and due diligence in project management. First, a much-neglected issue in project management is identified, namely that the front-end estimates of costs and benefits – used in the business cases, cost–benefit analyses, and social and environmental impact assessments that typically support decisions on projects – are commonly significantly different from actual ex post costs and benefits, and are therefore poor predictors of the actual value and viability of projects. Second, it is discussed how Kahneman and Tversky's theories of the planning fallacy and the outside view may help explain and remedy this situation through quality control of decisions. Third, it is described what quality control and due diligence are in the context of project management, and an eight-step procedure is outlined for due diligence based on the outside view. Fourth, the procedure is tested on a real-life, multibillion-dollar project, organized as a public–private partnership. Finally, Akerlof and Shiller's recent discussion in economics of “firing the forecaster” is discussed together with its relevance to project management. In sum, the paper demonstrates the need, the theoretical basis, a practical methodology, and a real-life example for how to de-bias project management using quality control and due diligence based on the outside view.

1.1. “Third Wave” research The 2011 Oxford Handbook of Project Management identifies a “third wave” in project management research characterized by a positioning of the management of projects as a vital part of general management (Morris et al., 2011:3). With projects taking center stage as delivery model for products and services in most organizations, project management can no longer be seen as a specialist subcategory of management brought to bear on special cases, but must instead be seen as a core business activity, vital to organizations as a whole. As part of this development from specific to general management, theory has developed from project-based theory to more general theory, substantially strengthening the academic base of project management, according to Söderlund (2011) and Turner et al. (2011). The present paper is intended as a contribution to, first, the third wave's focus on general management and, second, fortifying the theoretical basis of project management by focusing on general theory and its importance to project management. Winter et al. (2006), Williams et al. (2009), Edkins et al. (2012), and many others have identified high-quality front-end management as crucial to good project delivery. The front-end has been singled out as the perhaps most important stage in the overall project cycle in securing the success of projects, or avoiding failure. Within the front-end, estimating expected outcomes of projects and evaluating whether they justify investing in a given project is a key activity, and maybe the most consequential one, because ideally estimates inform the decision of whether projects will go ahead or not.1 Furthermore, the quality of estimates will highly influence whether a project is deemed successful or not in meeting its objectives. Yet, as pointed out by Edkins et al. (2012:6) there is little about this in the research literature, nor about how the quality of estimation may be improved. It is the purpose of the present paper to help fill this gap in the literature. Specifically, the paper brings Nobel prize-winning economic theory about the planning fallacy and the outside view, developed by Daniel Kahneman and Amos Tversky, to bear upon quality control and due diligence in the management of projects. Previous studies have documented a much-neglected topic in research and practice, namely that ex ante estimates of costs and benefits – used in the business cases, cost–benefit analyses, and social and environmental impact assessments that typically support decisions on projects – are often significantly different from actual ex post costs and benefits (Flyvbjerg, 2009). As a result, such business cases, cost–benefit analyses, and social and environmental impact assessments are typically poor predictors of the actual value and viability of projects and cannot be trusted as a basis for informed decision making. The idea proposed in the present article is: 1. to develop quality control and due diligence to establish just how reliable, or unreliable, the business case, cost–benefit analysis, and social and environmental impact assessment are for a given project, and 2. to decide the implications of this for the project go-ahead. Kahneman and Tversky did not develop their theories with these purposes in mind. The thesis is, however, that their theories will be highly effective in quality control and due diligence of planned projects and thus in improving decision making on projects. The existing literature on quality control, due diligence, and risk assessment in project management does not cover this particular approach to improved decision making (Breakwell, 2007, De Meyer et al., 2002, Fischoff, 2002, Perminova et al., 2008 and Winch, 2010). Due diligence is generally an evaluation of the assets of a company, an investment, or a person. Here, due diligence is specifically understood as an evaluation of the costs and benefits deriving from investing in a given project, and especially whether the estimated costs and benefits for that project are likely to materialize. Due diligence is thus developed to be used as “quality control” of business cases, cost–benefit analyses, and the go-decision in projects. Data to test the thesis are drawn from a large database on estimated and actual costs and benefits in major projects and programs. Theory and methodology are developed at a level of generalization sufficiently high to allow their use, not only in business cases and cost–benefit analyses, but also in social and environmental impact assessments, which are typically also key in decision making on major projects, and which also suffer from the problem of predicted impacts often being very different from actual ones (Flyvbjerg et al., 2002:49–64).

The present paper has taken a first step in researching a much-neglected problem in scholarly work on project management, namely what to do about the fact that front-end estimates of costs and benefits – used in the business cases, cost–benefit analyses, and social and environmental impact assessments that typically support decisions on projects – are often significantly different from actual ex post costs and benefits. Such estimates are therefore commonly poor predictors of the actual value and viability of projects and estimates frequently misinform decision makers on projects instead of informing them. The paper offers (1) a new methodology for quality control of front-end estimates, based on theories of the planning fallacy and the outside view, (2) a case study with empirical test and demonstration of the proposed methodology, and (3) incentives for getting front-end estimates right, including sanctioning forecasters who cause damage to others with their forecasts. Further research is needed in the following areas: 1. Case studies with additional examples of how the proposed (or similar) methodology for quality control works in practice, akin to the case study presented above, with a view to obtaining more in-depth knowledge and a wider variety of experience regarding the strengths and weaknesses of the methodology and the theories behind it. Studies should cover the full range of outcome variables and not just demand as in the case study above. 2. Statistical analyses of a sample of projects that have been subjected to the methodology for quality control (or alike methodology), with the specific purpose of measuring whether estimates become more accurate and actual outcomes improve with the application of the methodology. The sample should be large enough to allow tests for statistical significance. For valid results, estimates and actual performance should be measured consistently in the same manner across projects using standard methodology, something that is rarely done today in research on project performance. Such statistical analyses would inform further development of both the theory and methodology of quality control and due diligence in project management. 3. Studies of how different types of incentives and disincentives impact accuracy of front-end estimates, including the threat of legal action against forecasters who cause serious damage with their forecasts. Australia's Clem Jones class action suit, mentioned above, is likely to be an interesting case study in this context. Impacts of changed or new incentives should be studied not just for individual forecasters but across the wider forecasting community.