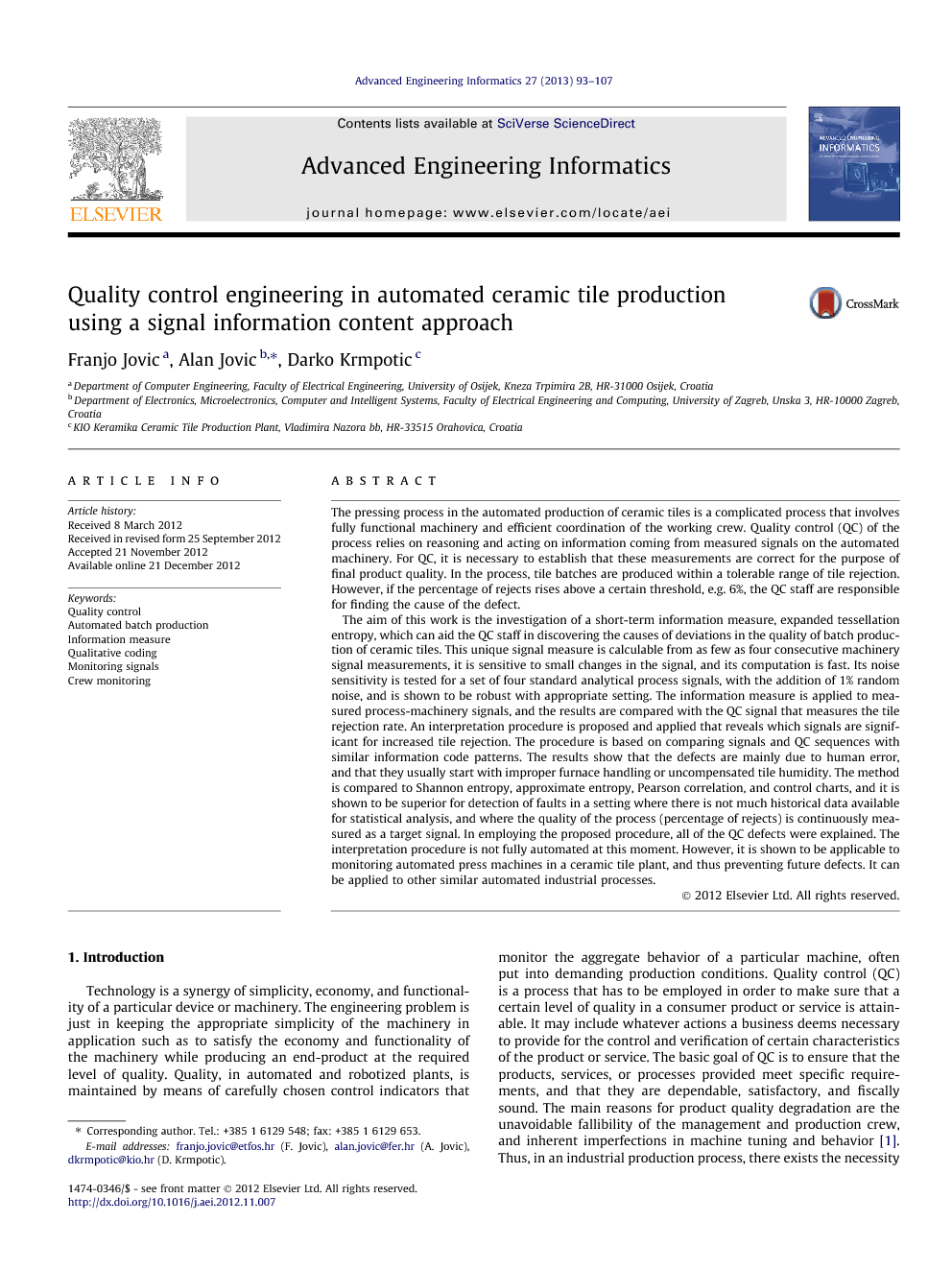 The pressing process in the automated production of ceramic tiles is a complicated process that involves fully functional machinery and efficient coordination of the working crew. Quality control (QC) of the process relies on reasoning and acting on information coming from measured signals on the automated machinery. For QC, it is necessary to establish that these measurements are correct for the purpose of final product quality. In the process, tile batches are produced within a tolerable range of tile rejection. However, if the percentage of rejects rises above a certain threshold, e.g. 6%, the QC staff are responsible for finding the cause of the defect. The aim of this work is the investigation of a short-term information measure, expanded tessellation entropy, which can aid the QC staff in discovering the causes of deviations in the quality of batch production of ceramic tiles. This unique signal measure is calculable from as few as four consecutive machinery signal measurements, it is sensitive to small changes in the signal, and its computation is fast. Its noise sensitivity is tested for a set of four standard analytical process signals, with the addition of 1% random noise, and is shown to be robust with appropriate setting. The information measure is applied to measured process-machinery signals, and the results are compared with the QC signal that measures the tile rejection rate. An interpretation procedure is proposed and applied that reveals which signals are significant for increased tile rejection. The procedure is based on comparing signals and QC sequences with similar information code patterns. The results show that the defects are mainly due to human error, and that they usually start with improper furnace handling or uncompensated tile humidity. The method is compared to Shannon entropy, approximate entropy, Pearson correlation, and control charts, and it is shown to be superior for detection of faults in a setting where there is not much historical data available for statistical analysis, and where the quality of the process (percentage of rejects) is continuously measured as a target signal. In employing the proposed procedure, all of the QC defects were explained. The interpretation procedure is not fully automated at this moment. However, it is shown to be applicable to monitoring automated press machines in a ceramic tile plant, and thus preventing future defects. It can be applied to other similar automated industrial processes.

A simple, fast and low-demand computing method for measurable information inquiry in an automated batch production system is proposed. This data variability method is based on the concept of one-dimensional expanded tessellation entropy, which takes a control signal as four-by-four point samples from the process and calculates its information content. We have shown that this information measure can be applied to an automated production process by interpreting the results of the analysis of impacts that process signals have on the QC variable. The interpretation was found useful for finding causes and effects of defects in the automated production of ceramic tiles. Finding out which signals caused the defect, and what were the effects in the automated production cycle, is an important step in preventing such events in the future by potentially changing machine settings and questioning the responsible press crew. We have shown that the sensitivity of our method has advantages over other approaches based on correlation, Shannon entropy and approximate entropy. Also, unlike control charts, our method is capable of discovering the cause of malfunction, particularly in situations where there is not much historical data for reliable statistical conclusions. The analysis presented will benefit control and QC engineers in applying tools for the unique follow-up of automated industrial process quality dynamics in cases where exceptions to the quality standards sporadically occur.