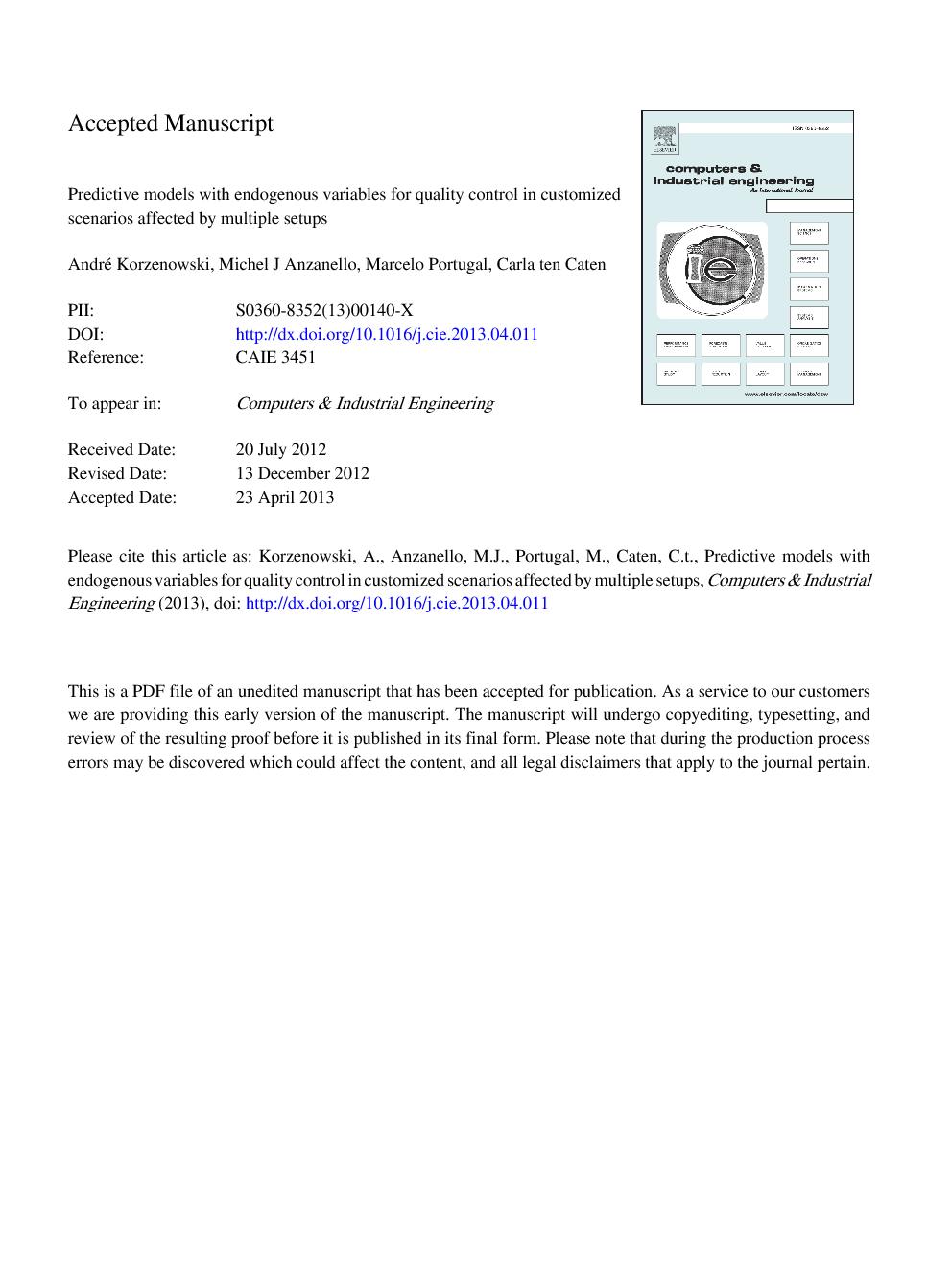 urces for monitoring several process scenarios. Lin and Chang (2012) evaluated the performance of a manufacturing system with multiple production lines, focusing on the process performance instead of products quality control. Although several studies in the literature tackled the multi-stage or multiple lines process control, these studies have not addressed the topic of multiple setups arising from a high variety of choice menu though ( Amiri et al., 2010, Saghaei et al., 2009, Williams et al., 2007 and Woodall, 2007). The choice menu is a key feature of mass customization. Da Silveira et al. (2001) defined mass customization as the ability of processing customized goods, with high capacity and low costs. This concept is associated with the idea of building a fast, integrated and flexible process. On the other way, it is hard to implement control charts in flexible scenarios, where product models frequently change and lots are small (Fogliatto et al., 2012 and Ho and Trindade, 2009). As for Ohno and Bodek (1988), it is essential to implement quality control tools in these scenarios to reduce inspection costs. However, a system relying on continuous monitoring and controlling of quality features in flexible environments requires specific tools for quality control (Fogliatto et al., 2012). As for the multiple setups issue, the typical solution consists of building a simple chart for each product. That approach endeavors a major drawback: fitting a different predictive model on each product does not take into account aspects captured by models previously fitted to other products (e.g. the variability inherent to equipment technology). Castillo, Grayson, Montgomery, and Runger (1996) suggested an approach to model multiple setup scenarios that calculates the deviation from target at time t; if the data variance in different setups is assumed constant then traditional control charts are applied; otherwise, authors suggested dividing the mean by the standard deviation. To the best of our knowledge, the small lot size, multiple setup problem has never been addressed by approaches that establish a relationship between response and explanatory variables. This paper contributes to statistical process control by introducing endogenous variables as independent variables in predictive models aimed at overcoming the multiple setup and short production runs problems normally found in highly customized applications. The endogenous variables describe the type/model of manufactured products, while the response variable predicts a product quality characteristic. In our propositions, three robust model-based approaches using endogenous variables are tested for modeling univariate time series: (i) an ARIMA model; (ii) a basic structural model consisting of level + trend components with stochastic parameters fitted by Kalman filter; and (iii) a Partial Least Squares (PLSs) model, acknowledged by its ability to handle ill-conditioned process data (Anzanello, Albin, & Chaovalitwongse, 2012). The model leading to the best prediction on testing data is recommended for further process monitoring. The proposed approach addresses the problem of model-based quality control in small lots and multiple setups, and does not rely on three well-known assumptions for quality tools applications: (i) identically distributed observations (i.e. constant distribution around the process mean); (ii) independent observations (i.e. absence of autocorrelation); and (iii) normality upon individual measure charts. In our propositions, the predictive performance is assessed through the Residual Mean Square Error (RMSE). The three aforementioned modeling approaches were never used with endogenous variables with statistical process control purposes. As for its flexibility, our approach is able to handle situations where customized products alter their production run length, demand and number of product models. The proportion between the number of products in each production length is also tackled by our propositions. We emphasize that there must be a reasonable number of historical observations for each model that enables training the predictive models. When applied to real manufacturing data, the proposed approach using PLS model yielded better results. We also conducted simulation experiments to assess the robustness of the modeling approaches with endogenous variables under different levels of data noise and number of products. The structural model outperformed the other modeling approaches yielding better adjustment in all simulated combinations. Simulated results also show that PLS model presented better results than the ARIMA approach for some combinations. This paper is structured as follows. Section 2 presents the modeling approaches, while Section 3 describes the methodological procedures for modeling real manufacturing data with multiple setups. In addition, we generate a simulation experiment to evaluate the performance of the tested methods. Section 4 presents and discusses the results, and Section 5 presents final remarks.

The demand for customized items implies constant model changing and smaller lot sizes, decreasing the efficiency of many tools for process control. We proposed the use of endogenous variables as independent variables in predictive models to improve prediction accuracy. The proposed endogenous variables are inserted into the models to describe changes on the product model under production. For that matter, three robust models, ARIMA, structural model and PLS regression are tested in real and simulated data. PLS presented the best performance in real data, but performed poorly in simulated scenarios. Such a weak performance might be caused by characteristics of the data generated by the structural or ARIMA models. Despite its non-persuasive performance in simulated data, the use of PLS for process control might be considered since it handles scenarios with multiple response variables and is not affected by highly correlated data. A general and simple approach for process control based on models relies on fitting ARIMA models and analyzing the residuals. In light that the tested structural model yielded better results than ARIMA even in data generated by an ARIMA process, the authors recommend the study of new approaches based on structural models. Finally, this comparative study points something not new: the better predictive model depends on the scenario to be fitted. Future developments include deeper studies on the predictive ability of the tested methods using more robust measures of predictive accuracy other than the RMSE. The analysis of scenarios with multiple response variables is also intended, since many industrial processes rely on monitoring several product variables. The use of alternative modeling approaches is also suggested for future studies in multiple scenarios quality control. That includes adapting the Neural network-based modeling by Ghiassi and Nangoy (2009) and Guh (2010), and continuous-time Markov process model proposed by Zeifman and Ingman (2003) to the multiple scenario problem.