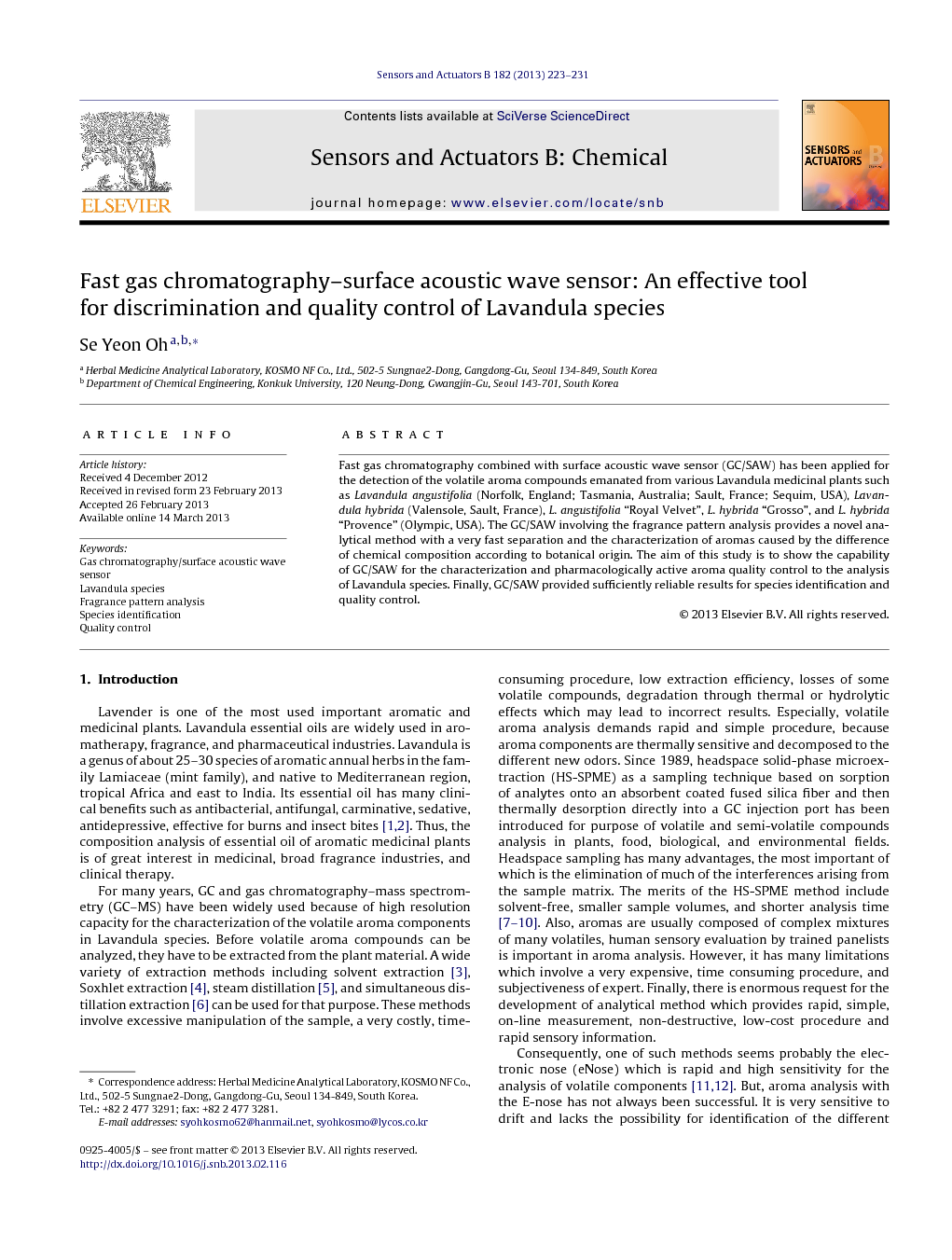 Fast gas chromatography combined with surface acoustic wave sensor (GC/SAW) has been applied for the detection of the volatile aroma compounds emanated from various Lavandula medicinal plants such as Lavandula angustifolia (Norfolk, England; Tasmania, Australia; Sault, France; Sequim, USA), Lavandula hybrida (Valensole, Sault, France), L. angustifolia “Royal Velvet”, L. hybrida “Grosso”, and L. hybrida “Provence” (Olympic, USA). The GC/SAW involving the fragrance pattern analysis provides a novel analytical method with a very fast separation and the characterization of aromas caused by the difference of chemical composition according to botanical origin. The aim of this study is to show the capability of GC/SAW for the characterization and pharmacologically active aroma quality control to the analysis of Lavandula species. Finally, GC/SAW provided sufficiently reliable results for species identification and quality control.

Lavender is one of the most used important aromatic and medicinal plants. Lavandula essential oils are widely used in aromatherapy, fragrance, and pharmaceutical industries. Lavandula is a genus of about 25–30 species of aromatic annual herbs in the family Lamiaceae (mint family), and native to Mediterranean region, tropical Africa and east to India. Its essential oil has many clinical benefits such as antibacterial, antifungal, carminative, sedative, antidepressive, effective for burns and insect bites [1] and [2]. Thus, the composition analysis of essential oil of aromatic medicinal plants is of great interest in medicinal, broad fragrance industries, and clinical therapy. For many years, GC and gas chromatography–mass spectrometry (GC–MS) have been widely used because of high resolution capacity for the characterization of the volatile aroma components in Lavandula species. Before volatile aroma compounds can be analyzed, they have to be extracted from the plant material. A wide variety of extraction methods including solvent extraction [3], Soxhlet extraction [4], steam distillation [5], and simultaneous distillation extraction [6] can be used for that purpose. These methods involve excessive manipulation of the sample, a very costly, time-consuming procedure, low extraction efficiency, losses of some volatile compounds, degradation through thermal or hydrolytic effects which may lead to incorrect results. Especially, volatile aroma analysis demands rapid and simple procedure, because aroma components are thermally sensitive and decomposed to the different new odors. Since 1989, headspace solid-phase microextraction (HS-SPME) as a sampling technique based on sorption of analytes onto an absorbent coated fused silica fiber and then thermally desorption directly into a GC injection port has been introduced for purpose of volatile and semi-volatile compounds analysis in plants, food, biological, and environmental fields. Headspace sampling has many advantages, the most important of which is the elimination of much of the interferences arising from the sample matrix. The merits of the HS-SPME method include solvent-free, smaller sample volumes, and shorter analysis time [7], [8], [9] and [10]. Also, aromas are usually composed of complex mixtures of many volatiles, human sensory evaluation by trained panelists is important in aroma analysis. However, it has many limitations which involve a very expensive, time consuming procedure, and subjectiveness of expert. Finally, there is enormous request for the development of analytical method which provides rapid, simple, on-line measurement, non-destructive, low-cost procedure and rapid sensory information. Consequently, one of such methods seems probably the electronic nose (eNose) which is rapid and high sensitivity for the analysis of volatile components [11] and [12]. But, aroma analysis with the E-nose has not always been successful. It is very sensitive to drift and lacks the possibility for identification of the different aroma components causing the signal change [13]. Interestingly, eNose method combined with a principal component analysis (PCA) has successfully applied for the discrimination of olive oils of different qualities and different geographic origins [14] and [15]. Since 1998, a new technique, fast gas chromatography with surface acoustic wave sensor (GC/SAW, zNose), called electronic nose based on the headspace sampling method provides second unit analysis, simple, low-cost procedure, real time detection, and rapid sensory information [16], [17], [18], [19], [20], [21], [22], [23], [24], [25], [26] and [27]. Especially, the characteristic of simplicity of fast GC/SAW method does not demand extraction procedures and provides on-line measurements. The headspace vapor is swept into the inlet via a pump, and then the vapor passes through the valve where the compounds are adsorbed onto the trap inside the system. Switching the valve to the injection process causes helium gas to flow backwards through the trap and onto the column. Therefore, GC/SAW has diminished decomposition of plant materials, minimized activity of enzyme. Especially fast GC/SAW permits a high reproducibility and good sensitivity at the high picogram to nanogram level, makes it possible to detect sensitive living volatile materials quantitatively [25]. Also, GC/SAW allows pattern recognition by a visual fragrance pattern, called a VaporPrint or chromatographic fingerprint derived from the frequency of a SAW sensor. Fragrance pattern analysis also enables to detect environmental pollutant [16] and [17], detect off-flavors in wine [18], monitor the change of pharmacologically active volatiles according to real-time for living-organisms [21] and [25], discriminate the botanical and geographical origin for organism [22], [23], [26] and [27]. The advantages and the method validation of GC/SAW, adaptability to a variety of applications were reported in my previous publications [25], [26] and [27]. The aim of this study is to show the capability of GC/SAW for the characterization and pharmacologically active aroma quality control to the analysis of Lavandula species. In addition, volatile composition profile data for Lavandula species by GC/SAW were analyzed by PCA. Also, HS-SPME-GC–MS method was employed to confirm the identification of aroma components of Lavandula species and compared to GC/SAW.