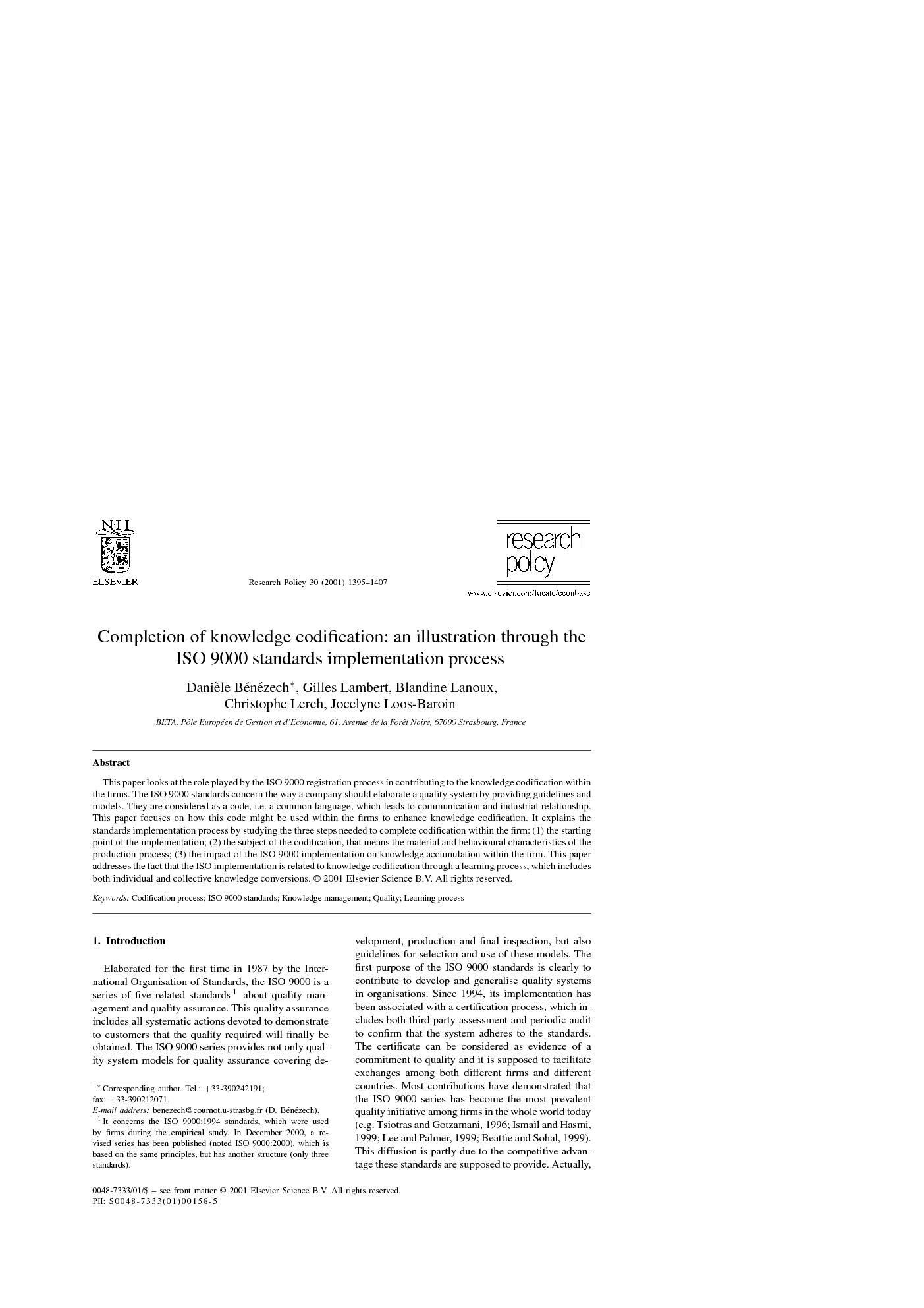 Elaborated for the first time in 1987 by the International Organisation of Standards, the ISO 9000 is a series of five related standards1 about quality management and quality assurance. This quality assurance includes all systematic actions devoted to demonstrate to customers that the quality required will finally be obtained. The ISO 9000 series provides not only quality system models for quality assurance covering development, production and final inspection, but also guidelines for selection and use of these models. The first purpose of the ISO 9000 standards is clearly to contribute to develop and generalise quality systems in organisations. Since 1994, its implementation has been associated with a certification process, which includes both third party assessment and periodic audit to confirm that the system adheres to the standards. The certificate can be considered as evidence of a commitment to quality and it is supposed to facilitate exchanges among both different firms and different countries. Most contributions have demonstrated that the ISO 9000 series has become the most prevalent quality initiative among firms in the whole world today (e.g. Tsiotras and Gotzamani, 1996, Ismail and Hasmi, 1999, Lee and Palmer, 1999 and Beattie and Sohal, 1999). This diffusion is partly due to the competitive advantage these standards are supposed to provide. Actually, most ISO 9000 studies focus on this topic (Curkovic and Pagell, 1999, Docking and Dowen, 1999 and Withers and Ebrahimpour, 2000. But few of them address the fact that achieving the ISO 9000 certification supposes a learning process inside organisations. There has been little examination of the relation between these standards and knowledge accumulation and management within the firms. This is the main topic of this paper. Its primary objective is to examine the implications of the ISO 9000 standards for the codification process within the firms. According to Winter (1995, p. 461), “Quality management ideas provide an interesting perspective on the nature of productive knowledge and the processes by which it is maintained and improved in organisations”. Quality management and consequently quality assurance are based on a dynamic process of acquisition and accumulation of knowledge that can be oriented by the ISO 9000 standards. Because of its widespread international acceptance, the ISO 9000 series can be viewed as a code, a language used by firms to extend their industrial relationship and their market share. As this code establishes the documentation requirements that must be met to demonstrate a company’s compliance with a quality system, it will be considered as an intermediate code. Indeed it has to be related to the characteristics of the firm to complete codification. We assume that the ISO 9000 series is a codification tool, which has to be well used by the firm to produce an efficient accumulation of knowledge within it. In order to gain an understanding of the specific use of this tool, the paper seeks to identify different steps in the ISO 9000 implementation process. Using a case approach, it compares two SMEs on the following issues: (1) reasons for seeking implementation (why); (2) the effective implementation process (on what and how); and (3) the impacts of the ISO 9000 standards on the knowledge accumulation (results). The paper is organised as follows. First, we argue that the ISO 9000 series is a codification tool, used as intermediate code within the firms. Second, we briefly describe the case study, which will provide opposite examples on the use of this tool. And the following sections focus on the analysis of the ISO 9000 standards implementation, dealing with the three steps of this process.

Over the last decade, the ISO 9000 standards have increased their impact on organisations by proposing a way to create a competitive advantage and to manage the quality systems. As they include documentation requirements, these standards are also related to the accumulation of knowledge within the firm. They promote knowledge codification and formalisation. The ISO 9000 series represents a guideline to build an efficient quality system and to provide learning effects. As a codebook, it provides a common language to firms and its implementation implies a process of knowledge codification within them. This language must be appropriated by people and articulated with the former codification of the firm. In that sense, it is an intermediate step to complete knowledge codification within the firm. The completion of the codification depends on the most active interpretation of the standard within the firm. To consider it only as a signal for partners may leads to an organisational rejection of the quality procedures because of the lack of translation. To consider it only as a constraint, imposed by the institutional environment (like the International Standards Organisation itself) or the industrial partners, induces the duplication of the model without any appropriation attempt. The commitment of top management is important at the starting-point of the implementation process. It should promote the sharing of the purpose between all the members of the firm and consequently their involvement in the codification process. The completion of codification depends also on the nature of the firm. The characteristics of the production process affect the nature of the knowledge to codify and, therefore, the difficulty of completing the codification, but not the result of the codification process. The latter is associated with two kind of learning processes: learning the standard and learning by the standard. These two types of learning (i.e. single loop and double loop) are linked in the sense that a continuous process of learning may create conditions for strategic reorientation. Learning the standard is not neutral for an organisation, and may generate capacities of adaptation due to learning by the standard itself. The impact of a descriptive codification such as the ISO 9000 model is not only a guarantee of stabilised process, but it is also a means for creating new potentialities for further improvements. This ability depends partly on the nature of the process and the managerial attitude toward continuous learning. Obviously, the knowledge management supported by the ISO 9000 implementation is a subject that has not been exhausted in this paper. For example, it could be useful to specify the role of team knowledge and its impact on the evolution of routines. These standards can also be considered as an organisational innovation that is widely diffused. Such a perspective should address the fact that the standards adoption might be interpreted with the technological diffusion literature.