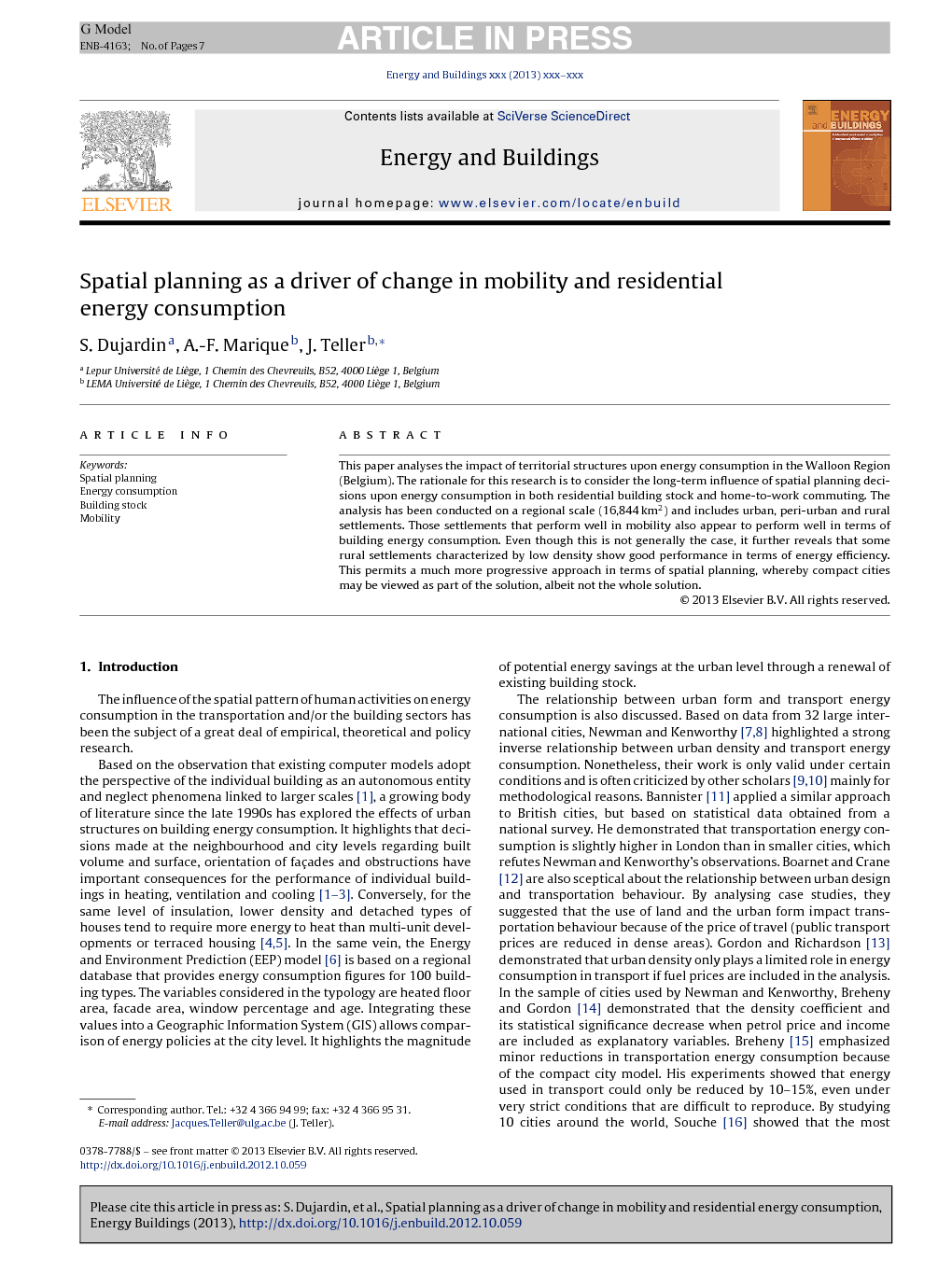 This paper analyses the impact of territorial structures upon energy consumption in the Walloon Region (Belgium). The rationale for this research is to consider the long-term influence of spatial planning decisions upon energy consumption in both residential building stock and home-to-work commuting. The analysis has been conducted on a regional scale (16,844 km2) and includes urban, peri-urban and rural settlements. Those settlements that perform well in mobility also appear to perform well in terms of building energy consumption. Even though this is not generally the case, it further reveals that some rural settlements characterized by low density show good performance in terms of energy efficiency. This permits a much more progressive approach in terms of spatial planning, whereby compact cities may be viewed as part of the solution, albeit not the whole solution.

The influence of the spatial pattern of human activities on energy consumption in the transportation and/or the building sectors has been the subject of a great deal of empirical, theoretical and policy research. Based on the observation that existing computer models adopt the perspective of the individual building as an autonomous entity and neglect phenomena linked to larger scales [1], a growing body of literature since the late 1990s has explored the effects of urban structures on building energy consumption. It highlights that decisions made at the neighbourhood and city levels regarding built volume and surface, orientation of façades and obstructions have important consequences for the performance of individual buildings in heating, ventilation and cooling [1], [2] and [3]. Conversely, for the same level of insulation, lower density and detached types of houses tend to require more energy to heat than multi-unit developments or terraced housing [4] and [5]. In the same vein, the Energy and Environment Prediction (EEP) model [6] is based on a regional database that provides energy consumption figures for 100 building types. The variables considered in the typology are heated floor area, facade area, window percentage and age. Integrating these values into a Geographic Information System (GIS) allows comparison of energy policies at the city level. It highlights the magnitude of potential energy savings at the urban level through a renewal of existing building stock. The relationship between urban form and transport energy consumption is also discussed. Based on data from 32 large international cities, Newman and Kenworthy [7] and [8] highlighted a strong inverse relationship between urban density and transport energy consumption. Nonetheless, their work is only valid under certain conditions and is often criticized by other scholars [9] and [10] mainly for methodological reasons. Bannister [11] applied a similar approach to British cities, but based on statistical data obtained from a national survey. He demonstrated that transportation energy consumption is slightly higher in London than in smaller cities, which refutes Newman and Kenworthy's observations. Boarnet and Crane [12] are also sceptical about the relationship between urban design and transportation behaviour. By analysing case studies, they suggested that the use of land and the urban form impact transportation behaviour because of the price of travel (public transport prices are reduced in dense areas). Gordon and Richardson [13] demonstrated that urban density only plays a limited role in energy consumption in transport if fuel prices are included in the analysis. In the sample of cities used by Newman and Kenworthy, Breheny and Gordon [14] demonstrated that the density coefficient and its statistical significance decrease when petrol price and income are included as explanatory variables. Breheny [15] emphasized minor reductions in transportation energy consumption because of the compact city model. His experiments showed that energy used in transport could only be reduced by 10–15%, even under very strict conditions that are difficult to reproduce. By studying 10 cities around the world, Souche [16] showed that the most statistically significant variables for transport energy consumption are transport cost and urban density. Finally, Ewing and Cervero [17] highlighted that per capita vehicle travel tends to decline and the use of alternative modes to increase with a rise in density. For these authors, compact developments, which reflect the cumulative effects of increased density, functional mix and transit accessibility, typically reduce the per capita vehicle travel by 25–30%. Similarly, Stead [18] found that if 43% of the variation in distances travelled is explained by socio-economic variables, 27% of this variation is directly related to land-use variables, which is considerable.

A method for a combined analysis of building and mobility performance has been established and applied to statistical units in the Walloon Region of Belgium. Results indicate that such performance is closely related to the nature of the statistical unit, both in terms of density and mixed use, and that performance along these two axes is closely related. It confirms that density and mixed use play an important role in reducing consumption for both home-to-work travel and the heating of buildings. Accordingly, spatial planning policies should ensure that the location of new buildings and economic activities is directed towards existing settlements with a view to densifying and diversifying their built environment. The analysis further highlights that entities with better-than-average performance can be identified in all types of settlements, be they urban, peri-urban or rural. This is an argument for subtler solutions than the traditional compact city model, which is not readily applicable to existing peri-urban and rural settlements. In these configurations, priority should be given to the relocation of activities to lessen their dependency on remote centres of employment. The development of those areas where this is not possible should probably be limited by adequate containment policies. Finally, the analysis reveals the important potential for energy savings in current building stock. Spatial planning may be directed towards accelerating the renovation and/or the densification of existing urban fabric through containment policies. In some cases, it may be directed to increasing the substitution of existing houses by new ones with contemporary energy standards and higher densities. This is especially important in those peri-urban areas characterized by poor performance of their building stock and good accessibility by public transport to urban centres.