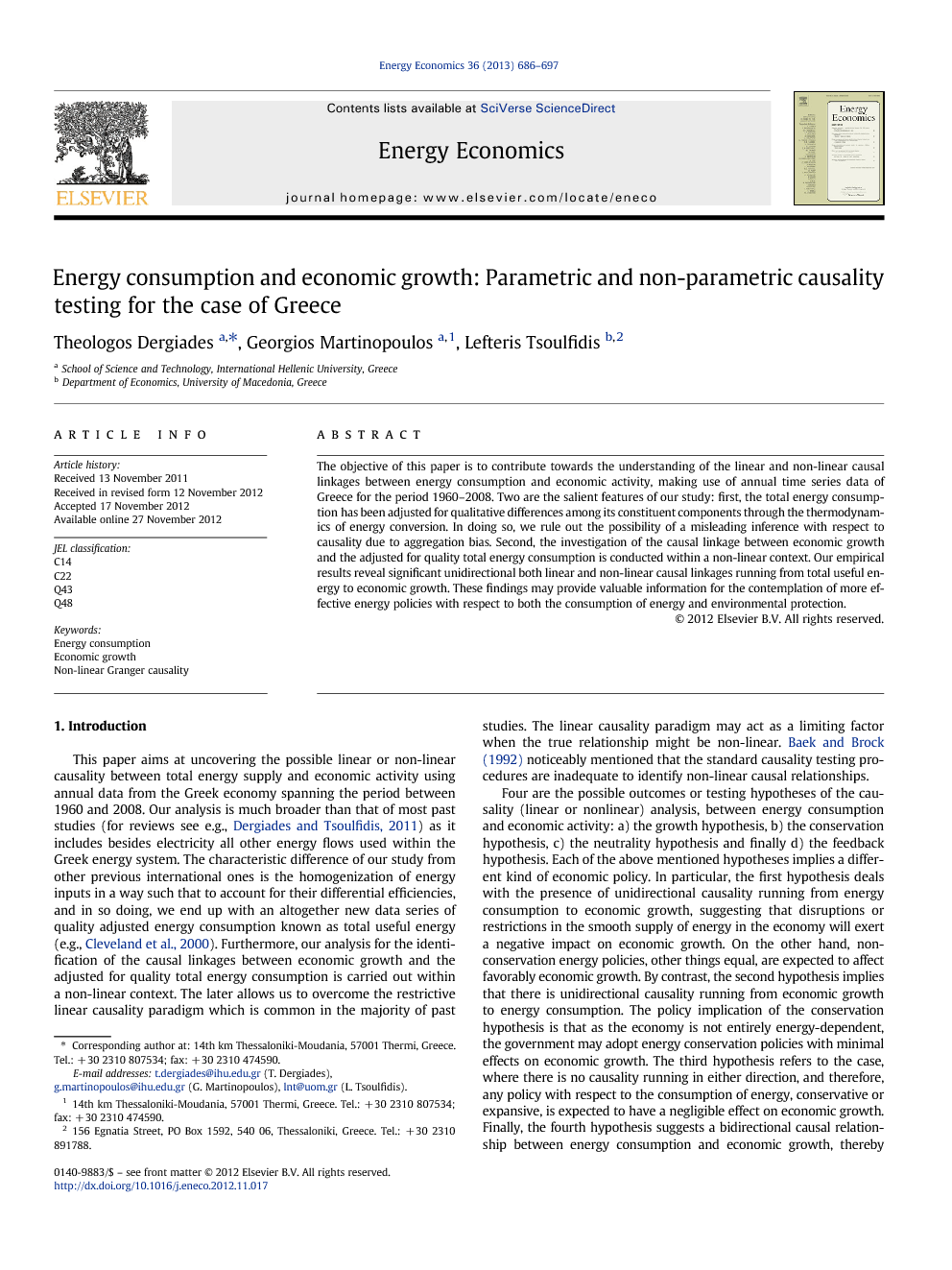 The objective of this paper is to contribute towards the understanding of the linear and non-linear causal linkages between energy consumption and economic activity, making use of annual time series data of Greece for the period 1960–2008. Two are the salient features of our study: first, the total energy consumption has been adjusted for qualitative differences among its constituent components through the thermodynamics of energy conversion. In doing so, we rule out the possibility of a misleading inference with respect to causality due to aggregation bias. Second, the investigation of the causal linkage between economic growth and the adjusted for quality total energy consumption is conducted within a non-linear context. Our empirical results reveal significant unidirectional both linear and non-linear causal linkages running from total useful energy to economic growth. These findings may provide valuable information for the contemplation of more effective energy policies with respect to both the consumption of energy and environmental protection.

This paper aims at uncovering the possible linear or non-linear causality between total energy supply and economic activity using annual data from the Greek economy spanning the period between 1960 and 2008. Our analysis is much broader than that of most past studies (for reviews see e.g., Dergiades and Tsoulfidis, 2011) as it includes besides electricity all other energy flows used within the Greek energy system. The characteristic difference of our study from other previous international ones is the homogenization of energy inputs in a way such that to account for their differential efficiencies, and in so doing, we end up with an altogether new data series of quality adjusted energy consumption known as total useful energy (e.g., Cleveland et al., 2000). Furthermore, our analysis for the identification of the causal linkages between economic growth and the adjusted for quality total energy consumption is carried out within a non-linear context. The later allows us to overcome the restrictive linear causality paradigm which is common in the majority of past studies. The linear causality paradigm may act as a limiting factor when the true relationship might be non-linear. Baek and Brock (1992) noticeably mentioned that the standard causality testing procedures are inadequate to identify non-linear causal relationships. Four are the possible outcomes or testing hypotheses of the causality (linear or nonlinear) analysis, between energy consumption and economic activity: a) the growth hypothesis, b) the conservation hypothesis, c) the neutrality hypothesis and finally d) the feedback hypothesis. Each of the above mentioned hypotheses implies a different kind of economic policy. In particular, the first hypothesis deals with the presence of unidirectional causality running from energy consumption to economic growth, suggesting that disruptions or restrictions in the smooth supply of energy in the economy will exert a negative impact on economic growth. On the other hand, non-conservation energy policies, other things equal, are expected to affect favorably economic growth. By contrast, the second hypothesis implies that there is unidirectional causality running from economic growth to energy consumption. The policy implication of the conservation hypothesis is that as the economy is not entirely energy-dependent, the government may adopt energy conservation policies with minimal effects on economic growth. The third hypothesis refers to the case, where there is no causality running in either direction, and therefore, any policy with respect to the consumption of energy, conservative or expansive, is expected to have a negligible effect on economic growth. Finally, the fourth hypothesis suggests a bidirectional causal relationship between energy consumption and economic growth, thereby lending support to the view that a carefully designed mix of taxation and subsidization policies may exert a positive growth effect in the economy without influencing, at the same time, the effectiveness of the implemented energy conservation policies. As a consequence, the empirical findings related to the causality direction, may be extremely useful for the appraisal of the effectiveness of various energy policies.

This article has examined the linear and non-linear causal linkages between total useful energy and economic growth in the Greek economy. Given that energy flows comprise various and distinct qualities, our study makes an effort to account for these qualitative differences and in so doing to provide bias-free energy time series data which are appropriate for the statistical investigation. Another new element in our study is the adoption of a non-parametric and non-linear econometric framework in order to assess the causal linkage between economic growth and energy consumption. In particular, apart from the implementation of the standard Granger causality test (Granger, 1969), we applied the well known non-parametric Hiemstra and Jones (1994) test for non-linear causality as well as its recent modification, proposed by Diks and Panchenko (2006). Our results for the Greek economy imply that there is reasonable statistical evidence to support the presence of a unidirectional causal relationship running from energy consumption to economic growth. The identified causality is attributed not only to the conditional mean but also to the second or higher order moments. Despite the fact that our analysis concentrates on Greece and the empirical findings are directly applicable only for the Greek economy the adopted methodological framework (energy quality adjustment along with a non-linear causality testing) may have wider implications on the relevant research field in the sense that it can be straightforwardly implemented to other countries. Such framework will allow researchers to infer in a safer manner conclusions about the true relationship between economic growth and energy consumption. Although our empirical findings lend overwhelming support to the growth hypothesis, nevertheless extreme caution should be applied in using these results to propose concrete economic policy measures. A major concern for the practical validity of the resulting policy recommendations stems from the bivariate specification adopted.20 A source of criticism regarding simplified specifications lies in the fact that their theoretical underpinnings are not derived directly from standard economic theory (demand/supply functions); consequently, the issue of the omitted variable bias becomes a serious threat. In the presence of the omitted variable bias issue, central channels of causality for the contemplation of an effective energy policy may remain unidentified.