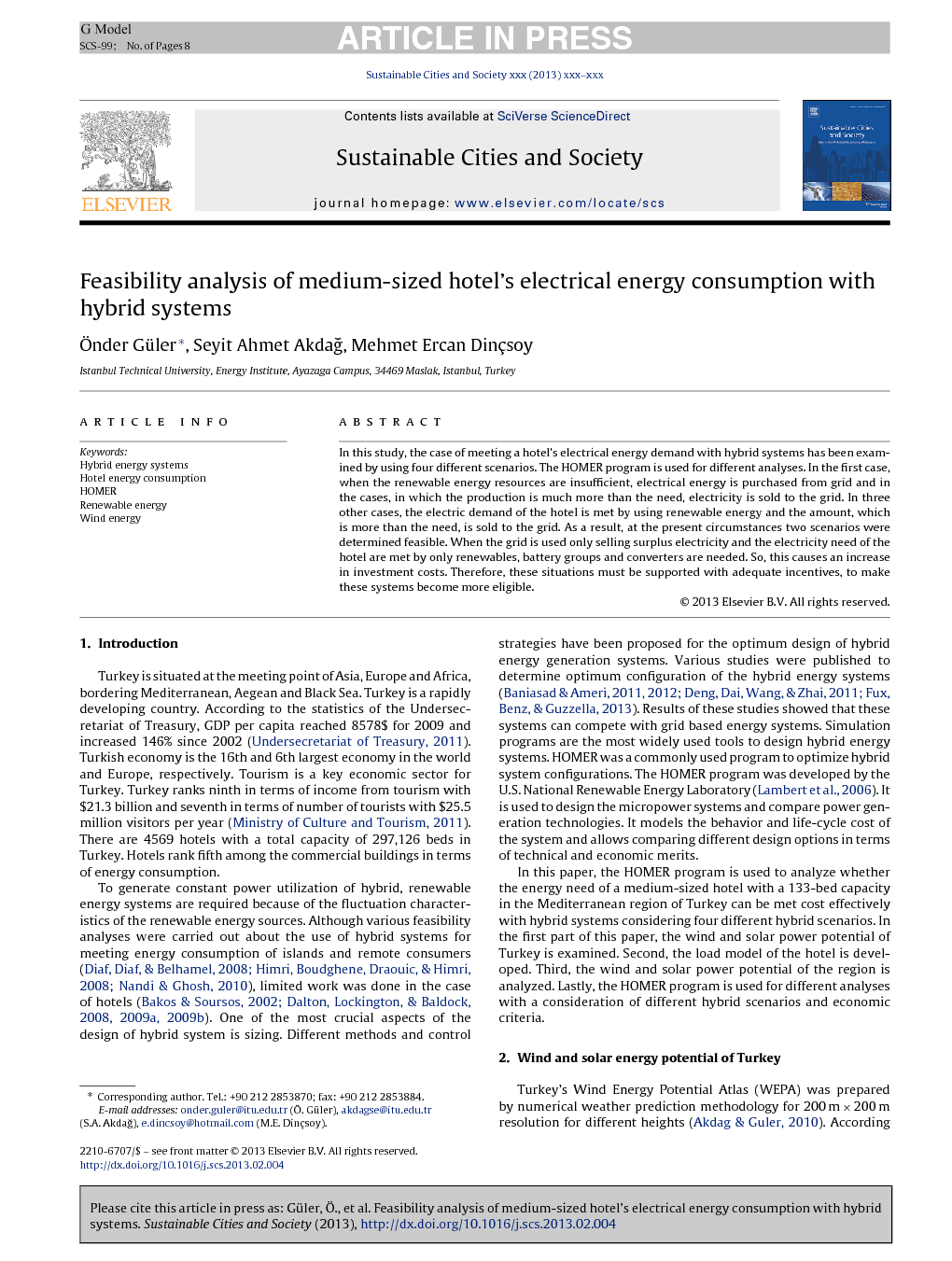 In this study, the case of meeting a hotel's electrical energy demand with hybrid systems has been examined by using four different scenarios. The HOMER program is used for different analyses. In the first case, when the renewable energy resources are insufficient, electrical energy is purchased from grid and in the cases, in which the production is much more than the need, electricity is sold to the grid. In three other cases, the electric demand of the hotel is met by using renewable energy and the amount, which is more than the need, is sold to the grid. As a result, at the present circumstances two scenarios were determined feasible. When the grid is used only selling surplus electricity and the electricity need of the hotel are met by only renewables, battery groups and converters are needed. So, this causes an increase in investment costs. Therefore, these situations must be supported with adequate incentives, to make these systems become more eligible.

Turkey is situated at the meeting point of Asia, Europe and Africa, bordering Mediterranean, Aegean and Black Sea. Turkey is a rapidly developing country. According to the statistics of the Undersecretariat of Treasury, GDP per capita reached 8578$ for 2009 and increased 146% since 2002 (Undersecretariat of Treasury, 2011). Turkish economy is the 16th and 6th largest economy in the world and Europe, respectively. Tourism is a key economic sector for Turkey. Turkey ranks ninth in terms of income from tourism with $21.3 billion and seventh in terms of number of tourists with $25.5 million visitors per year (Ministry of Culture and Tourism, 2011). There are 4569 hotels with a total capacity of 297,126 beds in Turkey. Hotels rank fifth among the commercial buildings in terms of energy consumption. To generate constant power utilization of hybrid, renewable energy systems are required because of the fluctuation characteristics of the renewable energy sources. Although various feasibility analyses were carried out about the use of hybrid systems for meeting energy consumption of islands and remote consumers (Diaf et al., 2008, Himri et al., 2008 and Nandi and Ghosh, 2010), limited work was done in the case of hotels (Bakos and Soursos, 2002, Dalton et al., 2008, Dalton et al., 2009a and Dalton et al., 2009b). One of the most crucial aspects of the design of hybrid system is sizing. Different methods and control strategies have been proposed for the optimum design of hybrid energy generation systems. Various studies were published to determine optimum configuration of the hybrid energy systems (Baniasad and Ameri, 2011, Baniasad and Ameri, 2012, Deng et al., 2011 and Fux et al., 2013). Results of these studies showed that these systems can compete with grid based energy systems. Simulation programs are the most widely used tools to design hybrid energy systems. HOMER was a commonly used program to optimize hybrid system configurations. The HOMER program was developed by the U.S. National Renewable Energy Laboratory (Lambert et al., 2006). It is used to design the micropower systems and compare power generation technologies. It models the behavior and life-cycle cost of the system and allows comparing different design options in terms of technical and economic merits.

In this study, the case of meeting a hotel's electrical energy demand with hybrid systems has been examined by using four different scenarios. In scenario 1, optimal solution was achieved only for wind turbine and grid. The optimum solution was not obtained for both solar panel and wind turbine due to the high investment and energy production cost of solar panels. The renewable fraction of this system was obtained as 74% and the best economical result was achieved in this situation with 2,932,891$ NPC. When the other three scenarios are compared, the renewable fraction of these scenarios was 100%, NPC values of these systems were obtained as 8,972,688$, 4,539,142$ and 22,026,701$, for scenarios 2, 3 and 4, respectively. In these scenarios grid is used only for selling surplus electricity to grid. These systems are not seen as appropriate investments except scenario 3, because of the high investment cost. And also area, which is necessary for PV installation, is another disadvantage of these systems. But, if the sale price of the electricity is increased, these system configurations will become more suitable for investment.