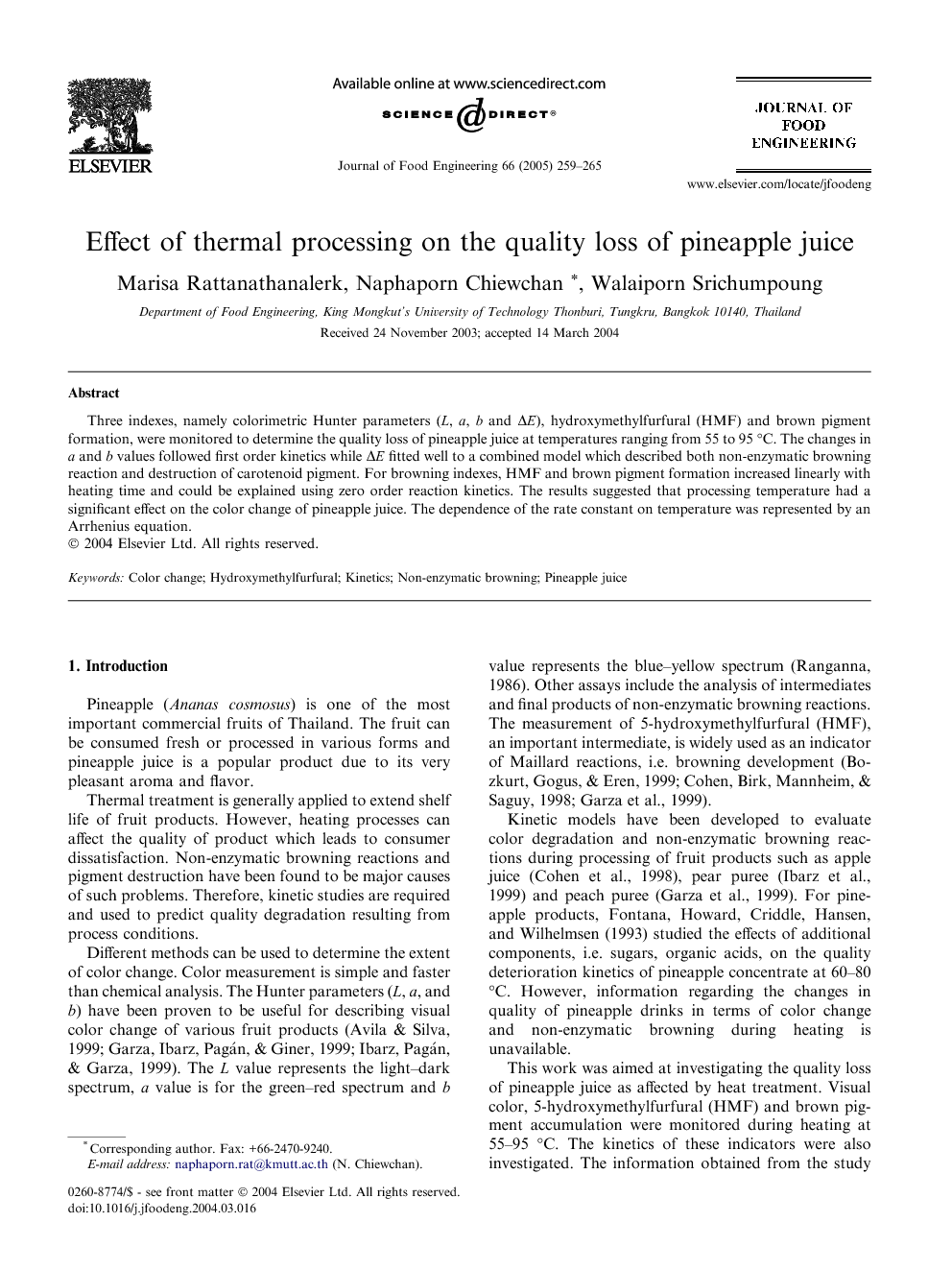 Three indexes, namely colorimetric Hunter parameters (L, a, b and ΔE), hydroxymethylfurfural (HMF) and brown pigment formation, were monitored to determine the quality loss of pineapple juice at temperatures ranging from 55 to 95 °C. The changes in a and b values followed first order kinetics while ΔE fitted well to a combined model which described both non-enzymatic browning reaction and destruction of carotenoid pigment. For browning indexes, HMF and brown pigment formation increased linearly with heating time and could be explained using zero order reaction kinetics. The results suggested that processing temperature had a significant effect on the color change of pineapple juice. The dependence of the rate constant on temperature was represented by an Arrhenius equation.

Pineapple (Ananas cosmosus) is one of the most important commercial fruits of Thailand. The fruit can be consumed fresh or processed in various forms and pineapple juice is a popular product due to its very pleasant aroma and flavor. Thermal treatment is generally applied to extend shelf life of fruit products. However, heating processes can affect the quality of product which leads to consumer dissatisfaction. Non-enzymatic browning reactions and pigment destruction have been found to be major causes of such problems. Therefore, kinetic studies are required and used to predict quality degradation resulting from process conditions. Different methods can be used to determine the extent of color change. Color measurement is simple and faster than chemical analysis. The Hunter parameters (L, a, and b) have been proven to be useful for describing visual color change of various fruit products (Avila & Silva, 1999; Garza, Ibarz, Pagán, & Giner, 1999; Ibarz, Pagán, & Garza, 1999). The L value represents the light–dark spectrum, a value is for the green–red spectrum and b value represents the blue–yellow spectrum (Ranganna, 1986). Other assays include the analysis of intermediates and final products of non-enzymatic browning reactions. The measurement of 5-hydroxymethylfurfural (HMF), an important intermediate, is widely used as an indicator of Maillard reactions, i.e. browning development (Bozkurt, Gogus, & Eren, 1999; Cohen, Birk, Mannheim, & Saguy, 1998; Garza et al., 1999). Kinetic models have been developed to evaluate color degradation and non-enzymatic browning reactions during processing of fruit products such as apple juice (Cohen et al., 1998), pear puree (Ibarz et al., 1999) and peach puree (Garza et al., 1999). For pineapple products, Fontana, Howard, Criddle, Hansen, and Wilhelmsen (1993) studied the effects of additional components, i.e. sugars, organic acids, on the quality deterioration kinetics of pineapple concentrate at 60–80 °C. However, information regarding the changes in quality of pineapple drinks in terms of color change and non-enzymatic browning during heating is unavailable. This work was aimed at investigating the quality loss of pineapple juice as affected by heat treatment. Visual color, 5-hydroxymethylfurfural (HMF) and brown pigment accumulation were monitored during heating at 55–95 °C. The kinetics of these indicators were also investigated. The information obtained from the study could be used as a guideline for designing thermal processes to reduce the quality degradation of the products.

The quality degradation of pineapple juice due to heat treatment was studied at temperatures ranging from 55 to 95 °C. The changes in Hunter parameters a and b followed first order kinetics while the change in parameter L could not be fitted to any simple relationship. Total color difference (ΔE) could be described using a combined model which included the effect of both non-enzymatic browning and pigment destruction. The changes of 5-hydroxymethylfurfural (HMF) and brown pigment formation were chosen to demonstrate the non-enzymatic browning reaction occurring during the study and were found to follow zero order kinetics. The results suggested that processing temperatures strongly influenced the reaction rate. The Arrhenius model could be used to describe the temperature dependence of the reaction rate constant for all parameters considered. A study of quality loss in terms of sugars and amino acids, the substrates of the Maillard reaction, together with carotenoid destruction as affected by heat treatment is recommended for future work.