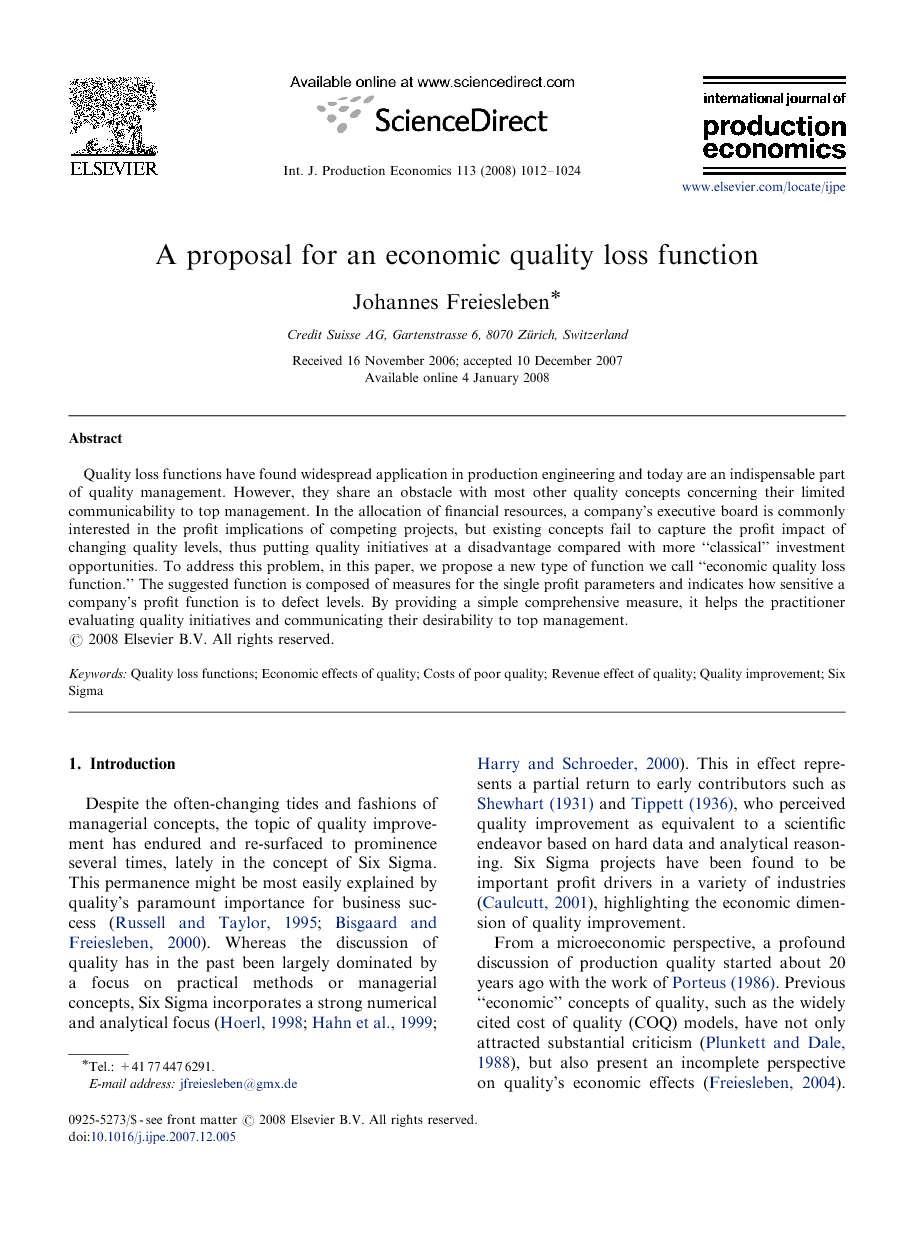 Quality loss functions have found widespread application in production engineering and today are an indispensable part of quality management. However, they share an obstacle with most other quality concepts concerning their limited communicability to top management. In the allocation of financial resources, a company's executive board is commonly interested in the profit implications of competing projects, but existing concepts fail to capture the profit impact of changing quality levels, thus putting quality initiatives at a disadvantage compared with more “classical” investment opportunities. To address this problem, in this paper, we propose a new type of function we call “economic quality loss function.” The suggested function is composed of measures for the single profit parameters and indicates how sensitive a company's profit function is to defect levels. By providing a simple comprehensive measure, it helps the practitioner evaluating quality initiatives and communicating their desirability to top management.

Despite the often-changing tides and fashions of managerial concepts, the topic of quality improvement has endured and re-surfaced to prominence several times, lately in the concept of Six Sigma. This permanence might be most easily explained by quality's paramount importance for business success (Russell and Taylor, 1995; Bisgaard and Freiesleben, 2000). Whereas the discussion of quality has in the past been largely dominated by a focus on practical methods or managerial concepts, Six Sigma incorporates a strong numerical and analytical focus (Hoerl, 1998; Hahn et al., 1999; Harry and Schroeder, 2000). This in effect represents a partial return to early contributors such as Shewhart (1931) and Tippett (1936), who perceived quality improvement as equivalent to a scientific endeavor based on hard data and analytical reasoning. Six Sigma projects have been found to be important profit drivers in a variety of industries (Caulcutt, 2001), highlighting the economic dimension of quality improvement. From a microeconomic perspective, a profound discussion of production quality started about 20 years ago with the work of Porteus (1986). Previous “economic” concepts of quality, such as the widely cited cost of quality (COQ) models, have not only attracted substantial criticism (Plunkett and Dale, 1988), but also present an incomplete perspective on quality's economic effects (Freiesleben, 2004). Porteus's model captured the relationship between quality and production economics by examining the effect of defect rates on optimal lot sizes and one-shot preventive investments. This model was later refined by Fine and Porteus (1989) to include the effect of small but continuous preventive investments. The research into the economic effects of quality has since been greatly advanced and firmly established in the production economics and operation research literatures. However, most of these contributions concern specific aspects of production and do not create a single comprehensive economic model of quality. In the same year of Porteus's original contribution, Taguchi (1986) highlighted the economic consequences of deviating from production target values by conceptualizing the “quality loss function” (QLF). Taguchi was the first to apply the loss function concept, which by then found widespread appreciation in economics, statistics and decision theory, to the quality management field. Due to his seminal work and subsequent extensions (Taguchi et al., 1989; Taguchi and Clausing, 1990), loss functions today are an indispensable part of quality engineering. Although profoundly influential in process design and production management, QLFs share an obstacle with most other quality improvement concepts concerning their limited communicability to top management. In the allocation of resources a company's executive board is commonly interested in the profit implications of competing projects, and quality initiatives often have a disadvantage when compared with “classical” investment opportunities such as new product development or marketing campaigns. This disadvantage might be connected to a lack of understanding of quality's economic effects and its rare perception as an investment but also to relatively scarce and inconclusive quantitative data on its profit effects (Wruck and Jensen, 1994; Powell, 1995; Terziovski and Samson, 2001; Dale et al, 2001). Most importantly, the existing COQ and QLF models cannot provide management with a measure of how the quality of a certain production unit affects the company's profitability. In this paper, we want to propose a new type of function we call “economic quality loss function” (EQLF) to capture the profit impact of changing quality levels. Our aim is to find a simple and communicable yet comprehensive model of quality profitability, which is adjustable to different production scenarios such as differences in the market reaction to poor quality or the absolute quality distance to competitors. Therefore, the suggested EQLF is composed of measures for the four profit parameters price, variable costs, sales volume and fixed costs and provides an indication of how sensitive a company's profit function is to defect levels. It adopts the loss perspective of QLFs and uses deviations from quality perfection to demonstrate the underlying economic logic of quality improvement. By providing a simple comprehensive measure, it helps quality practitioners in communicating the desirability of quality initiatives to top management. The remainder of this paper is organized as follows. In Section 2, we review the main types of QLFs and specifically describe Taguchi's contribution. In Section 3, we evaluate QLFs and identify their limitations as a communication tool. In Section 4, we develop a model for the proposed EQLF. Properties of a uniform EQLF are described in Section 5. Section 6 provides an example from a production facility to illustrate the functional capability of the model. Discussion and concluding remarks are presented in Section 7.